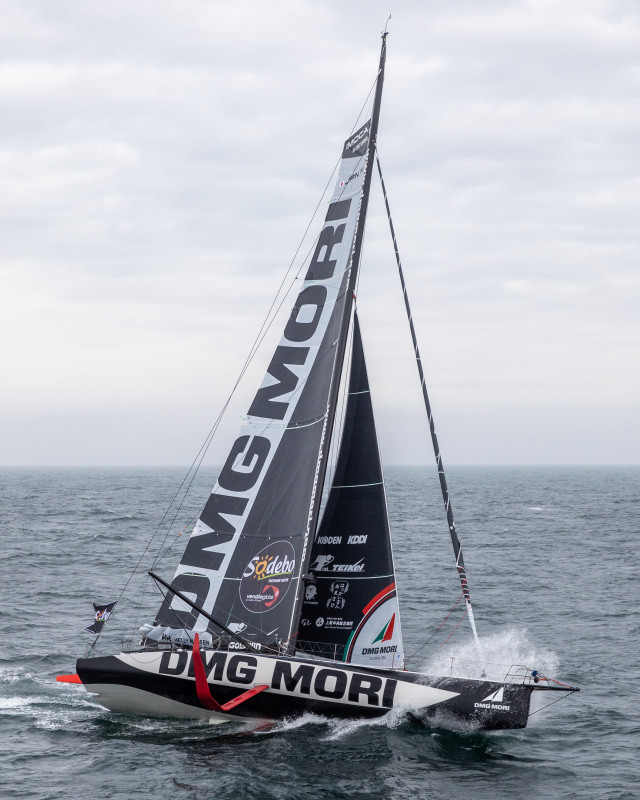 Sistership to Charal 1, the foiler DMG Mori Global One was built at the Multiplast yard in 2019 for Kojiro Shiraishi for the ninth edition of the Vendée Globe.

The Japanese skipper participated in the previous Vendée Globe on the former Estrella Damm, which went on to become BT and then Veolia Environnement, with which Roland Jourdain won the 2010 Route du Rhum. The team of the skipper from the land of the rising sun opted not to upgrade the boat, but rather to enhance it. As a result, Kojiro set off on the solo round the world race aboard a reliable boat with the same performance capabilities as Charal 1, which had shown remarkable potential. However, just one week into the race, Kojiro Shiraishi suffered an autopilot failure, causing the boat to yaw dramatically, resulting in three mainsail battens snapping and a large tear in the sail. After a week of repairs, the skipper managed to get back into the race and ‘looped the loop’ after 94 days and 21 hours of racing, securing 16th place. The first Asian sailor to successfully complete the Vendée Globe and a genuine legend in his home country, Kojiro Shiraishi then did a tour of Japan between 28 July and 21 November 2021, enabling thousands of visitors to discover his IMOCA across marinas from Yokohama to Ashiya and Tokoname. Returning to Europe from Japan via cargo ship, 2022 has seen DMG Mori participating in the Guyader Bermudes Race 1000 and the Vendée Arctique Les Sables d’Olonne, with Kojiro Shiraishi respectively securing 14th and 20th place. The skipper aims to compete in the next Vendée Globe in 2024.

Kojiro Shiraishi : "It’s taken me 30 years to complete this voyage"

"It’s taken longer than planned, but when I see all these people I know, it really cheers me up. It’s taken me 30 years to complete this voyage to finish what my master Yukoh Tada wanted to do and I’m proud of that."