Ari Huusela: the long voyage to the Vendée Globe 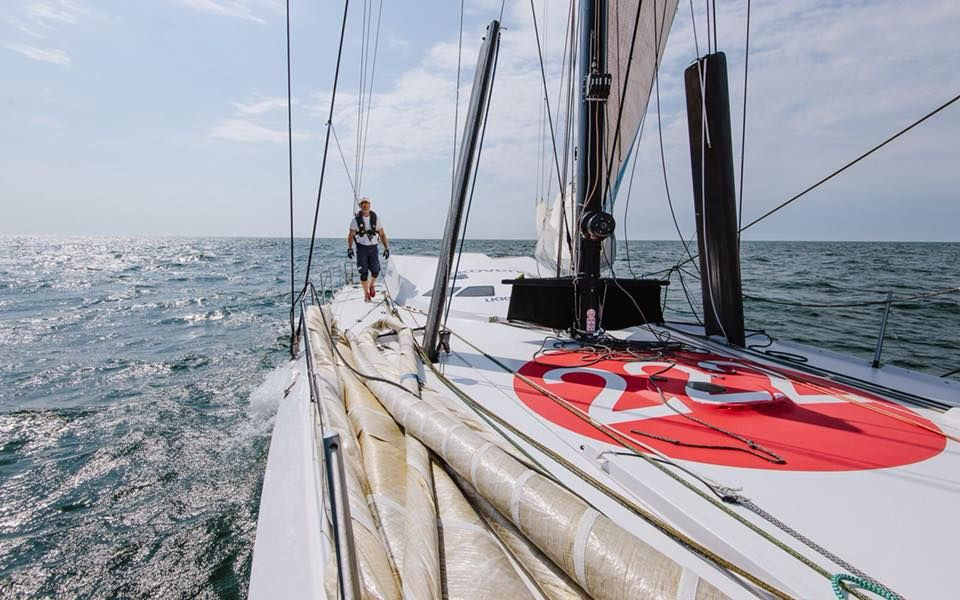 Ari Huusela has a dream. In 2020, he hopes to become the first Finnish sailor to compete in the Vendée Globe. A pilot working for the airline, Finnair, he is the proud owner of an Owen - Clarke designed boat based in Helsinki…

Ari Huusela has a dream. In 2020, he hopes to become the first Finnish sailor to compete in the Vendée Globe. A pilot working for the airline, Finnair, he is the proud owner of an Owen - Clarke designed boat based in Helsinki, which was formerly Dee Caffari’s Aviva. While there is still a long way to go and many hurdles to overcome to get to the non-stop, solo round the world race, Huusela will be taking a huge step forward when he lines up at the start of his first major IMOCA race, the Route du Rhum-Destination Guadeloupe, in two months from now.

A pilot for the airline, Finnair, Ari Huusela spends a lot of his time up in the air, but whenever he manages to find the opportunity, the 56-year old Finnish sailor takes to the sea. He has already completed three transatlantic races: the Mini Transat in 1996 and again in 2007 and the Route du Rhum in 2014 (in the Rhum class on a Pogo 40).

The Vendée Globe, a dream dating back to 1996

The idea of joining the IMOCA class was something that Ari Huusela spent a long time thinking about. The desire to compete in the Vendée Globe has been on his mind since 1996. That was the year when he travelled to Les Sables d’Olonne to take possession of a Mini 6.50. “Since then, I haven’t missed the start of a singleVendée Globe, so have attended the last five editions. I’m impressed by the incredible atmosphere, which surrounds this race. It’s completely crazy,” explained the keen sailor and airline pilot.

In 2016, Huusela decided to enter the IMOCA circuit by chartering the 60-foot boat that belonged to the British skipper, Richard Tolkien (a legendary Finot-Conq design from 1998) to take part in the Transat New York-Vendée. Unfortunately in the transatlantic race from Britain to America, Tolkien was forced to abandon his boat. Ari Huusela had no choice but to forget his New York-Vendée race.

That was merely a temporary setback. When visiting the Start Village for the 2016 Vendée Globe, the Finnish sailor caught sight of the former Aviva that was on display in the main exhibition hall. He found out that thisIMOCA, an Owen-Clarke design from 2007, was up for sale. She was the good performing 60-foot boat aboard which Dee Caffari completed the 2008-2009 Vendée Globe, before finishing sixth in the 2010-2011 Barcelona World Race (sailing double-handed with Anna Corbella). Ari seized the opportunity and managed to acquire her.

Since he got his hands on his new boat, Huusela has sailed more than 5000 miles aboard her. Last June, he obtained his qualification for the Route du Rhum, sailing 1400 miles solo in the Baltic Sea. “Those six days of sailing taught me a lot,” he explained. “As theconditions were very varied, I had to do a lot of sail changes. There was a lot of work to do and I learnt a lot during my first major solo trip aboard an IMOCA. I now feel much more relaxed aboard the the boat and I really appreciate her.”

For Ari Huusela, getting to the start of the Route du Rhum is in itself a first major victory. Completing the course would be a magnificent achievement, but he is not taking part just to do that, as he has some clear goals in the race too. “My aim is to line up at the start with a boat that has been prepared as well aspossible. If weather conditions allow, I would like to get to Guadeloupe in around 14 days.”

A long way to go

Ari Huusela is being kept busy. Apart from preparing his boat and getting in some training on her, he is still working for Finnair flying on long-haul flights to Asia four times a month, as that is what he refers to as his “real job.” “Flying is relaxing. It allows me to get away from my IMOCA project for a while, see something different and gives me time to thinks things over,” he added.
Ari Huusela also needs to work hard to complete his budget. While he will now definitely be at the start of the Route du Rhum, he still does not have the funding to be able to do as he would like and take part in all of the races in the IMOCA Globe Series. “I’m looking for a headline partner, as the name of the boat is still up for grabs,” he explained. “I remain optimistic, as I can see that my boat and my project interest the public and media in Finland.The country’s economy is in good shape. There is a long way to go and it’s going to be hard, but I really believe that there is a great story to tell here. Representing Finland for the first time in the Vendée Globe in 2020 would make me extremely proud.”

Mermod: The Vendée Arctique – an important and necessary race for the IMOCA Class

As the skippers continue to make their way back to the French coast after the early conclusion of the Vendée Arctique, Antoine Mermod, the president of the IMOCA Class, has expressed his enthusiasm for a race that he bel…