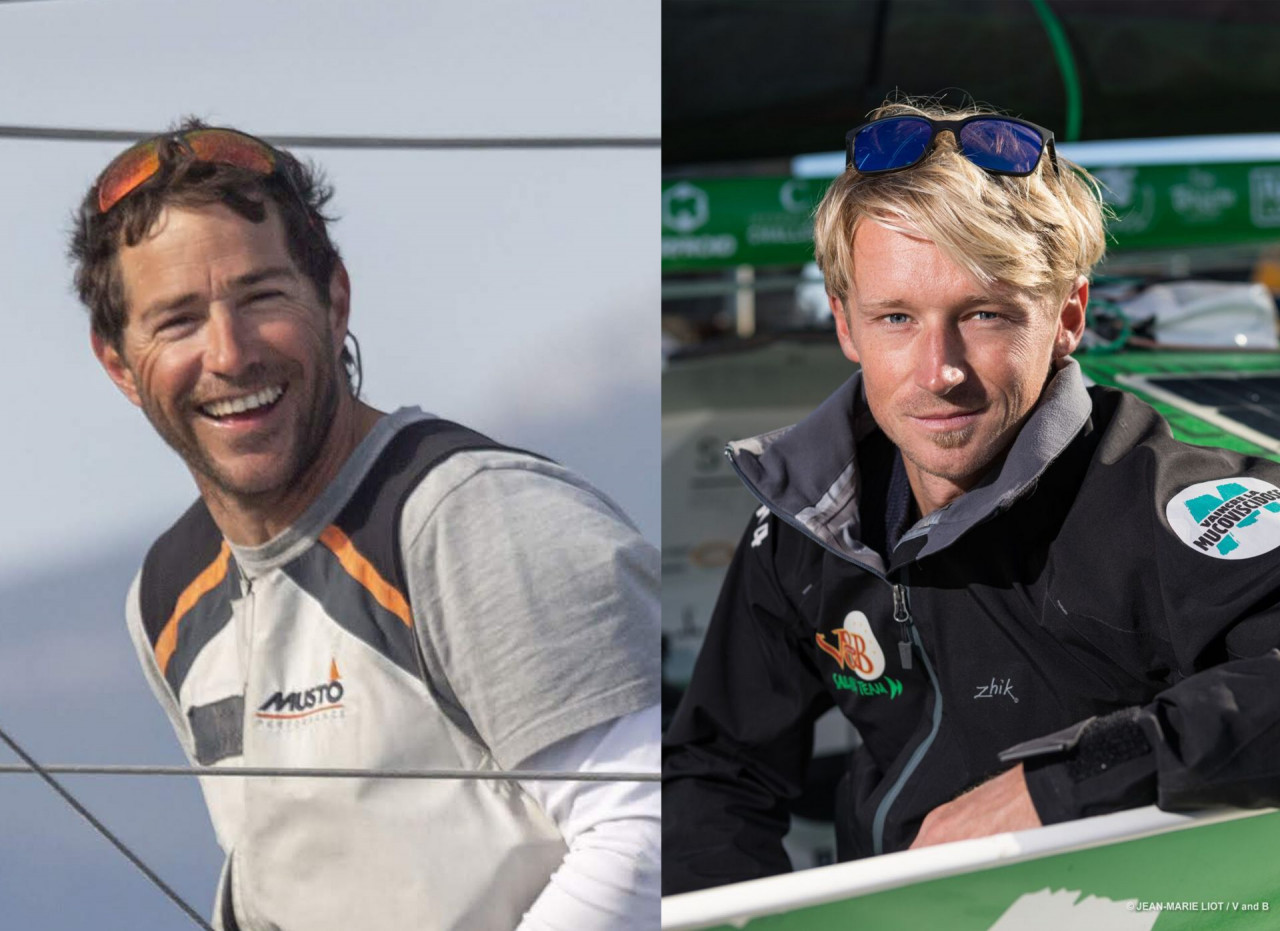 They are among the newcomers to the IMOCA class. Maxime Sorel, 32, and Clément Giraud, 38, come from different backgrounds, but share the same dream. They wish to take part in the 2020 Vendée Globe. We find out more about their two projects.

They are among the newcomers to the IMOCA class. Maxime Sorel, 32, and Clément Giraud, 38, come from different backgrounds, but share the same dream. They wish to take part in the 2020 Vendée Globe. We find out more about their two projects.

The Vendée Globe, a childhood dream and the gateway to the IMOCA class

It was the  prospect of competing in the Vendée Globe that attracted Maxime Sorel and Clément Giraud to the IMOCA circuit. For Maxime, victory in the 2017 Transat Jacques Vabre in Class40 with Antoine Carpentier was the turning point, which led him to take this leap. “Unlike in Class40, it was not financially possible for my partner V and B to build a brand new IMOCA,” explained Maxime. “That suited me as I want to move forward slowly but surely in the class, even if we just look at the logistics and organisational aspects, which are complicated with these boats. Even with an IMOCA from a previous generation, the budgets are huge and there is no room for any mistakes. But it is all worth the effort, as there is greater exposure, which is vital for a sponsor. In the next Transat Jacques Vabre, the IMOCAs will be the biggest boats in the dock. This class attracts people because of its professionalism and the fact that it is thriving.”

For Clément Giraud, the Vendée Globe is also a childhood dream. He has come a long way to get here. Until he was eighteen, Clément lived in the Caribbean and although he did a lot of sailing, he never signed up to a sailing club. When he came to Mandelieu in France, he worked for a sail-maker, obtained his official sailing certificate and then became a semi-professional sailor, taking part four times in the Tour de France Sailing Race. After his maiden adventure in the 2005 Mini Transat, he turned to crewed sailing (Farr40, TP52, 15 mJI, VOR70, etc). After all this experience, he wanted to try his hand again sailing solo with everything that entailed and so quite naturally Clément turned to IMOCAs. “I did a lot sailing on big boats out on the foredeck,” he explained. “On those boats, being a bowman is physically and psychologically demanding. Dealing with huge amounts of sail doesn’t scare me and I feel at home on an IMOCA.”

IMOCAs from the 2008 generation

In a tricky second-hand market, our two contenders opted for IMOCAs built for the 2008-2009 Vendée Globe, which are financially attractive, while still performing well for their age. Maxime bought Thomas Ruyant’s former boat, a VPLP-Verdier design from 2007. “She was one of the only good performing boats available and could easily be adapted. But it was worrying that she had broken up after a violent collision in the last Vendée Globe,” admitted Maxime. “In late 2018 in Port-La-Forêt, we took her out of the water to have her inspected by two marine experts. It would appear that the IMOCA was well repaired and remains solid, so there is no need to worry. With her powerful hull, this great boat remains a good performer.” Joan Mulloy and Thomas Ruyant proved that last year, when they finished in fourth place in the Monaco Globe Series. Since early January, the boat has been in Roland Jourdain’s Kaïros yard in Concarneau, where she is being optimised. “Everything was looked at and some parts were changed. This week we will be refitting all the equipment. The aim is to set off with a boat that is safe and sound, which will allow me to finish all of the races, which is vital to obtain my qualification for the Vendée Globe.”

As for Clément, he opted for the Farr design launched in 2006 by Vincent Riou in the colours of PRB. Since then, the boat has passed through the hands of Arnaud Boissières, Tanguy de Lamotte and Yannick Bestaven. “She is a boat that is well suited for a maiden adventure in the IMOCA class. During a recent eight-day trip between La Rochelle and Toulon, I could see that she was absolutely fantastic,” Clément told us. “She is pleasant to be on, well prepared and safe and copes well with small mistakes. It’s really enjoyable sailing her. My IMOCA has a strong history and that is important for me. I am very sentimental about the boats I sail on. I hope that we can have some great times together.”

Funding to be completed…
While both projects are well underway, both sailors are busy looking for the funding to be more at ease when working and with the aim of enhanced performance. Already backed by a group of companies, Clément Giraud is now looking for one or more headline partners: “I want to set up a human, collective and meaningful project. Today, the sails and hull on my boat are all white. That is a way to tell any potential sponsors: "Come and join us in this great adventure."
Maxime Sorel has the same problem with the boat initially taking the name V and B - Sailing Together. His loyal partner for five seasons in Class40, V and B has come up with 55 % of the budget for the campaign leading up to the 2020 Vendée Globe. “We are looking for a joint partner and we hope to show her off in early April, which will encourage firms to join us,” stressed Maxime.
… and many miles to sail

Getting used to an IMOCA requires a lot of time out on the water to ensure that everything comes naturally, and that you fully understand the qualities of the boat and her little weaknesses. Already this year, Clément Giraud and Maxime Sorel have packed sailing programmes. Well aware that to do well in the Vendée Globe, you have to know every little detail about your boat, Clément will be taking advantage of being based in Toulon to clock up the miles. “My goal is to sail more than 10,000 before the Transat Jacques Vabre,” he said. “I’ll be taking part in the Saint-Tropez 900 mile solo race. Then, I’ll head up to Douarnenez for the Guyader Grand Prix and the Bermuda 1000. After that, there is the Rolex Giraglia in the Mediterranean and the Azimut Challenge in Lorient. In the Jacques Vabre, I’ll be racing and not just taking part and I want to be up with the other boats from the same generation.”

Highly experienced in Class40, with in particular a win and a second place in the Transat Jacques Vabre, as well as two attempts at the Route du Rhum under his belt, Maxime Sorel will also be discovering what it is like to sail on an IMOCA. His IMOCA is due to be relaunched in early April. The boat will stay in Concarneau to prepare for the Guyader Grand Prix and the Bermuda 1000. She will then head for her home port of Lorient. From late May to mid-July, Maxime will be down in the Mediterranean for a PR operation with his partner. That will be followed by attempts at the Rolex Fastnet Race, the Azimut Challenge and of course, the Transat Jacques Vabre (start on 27th October).