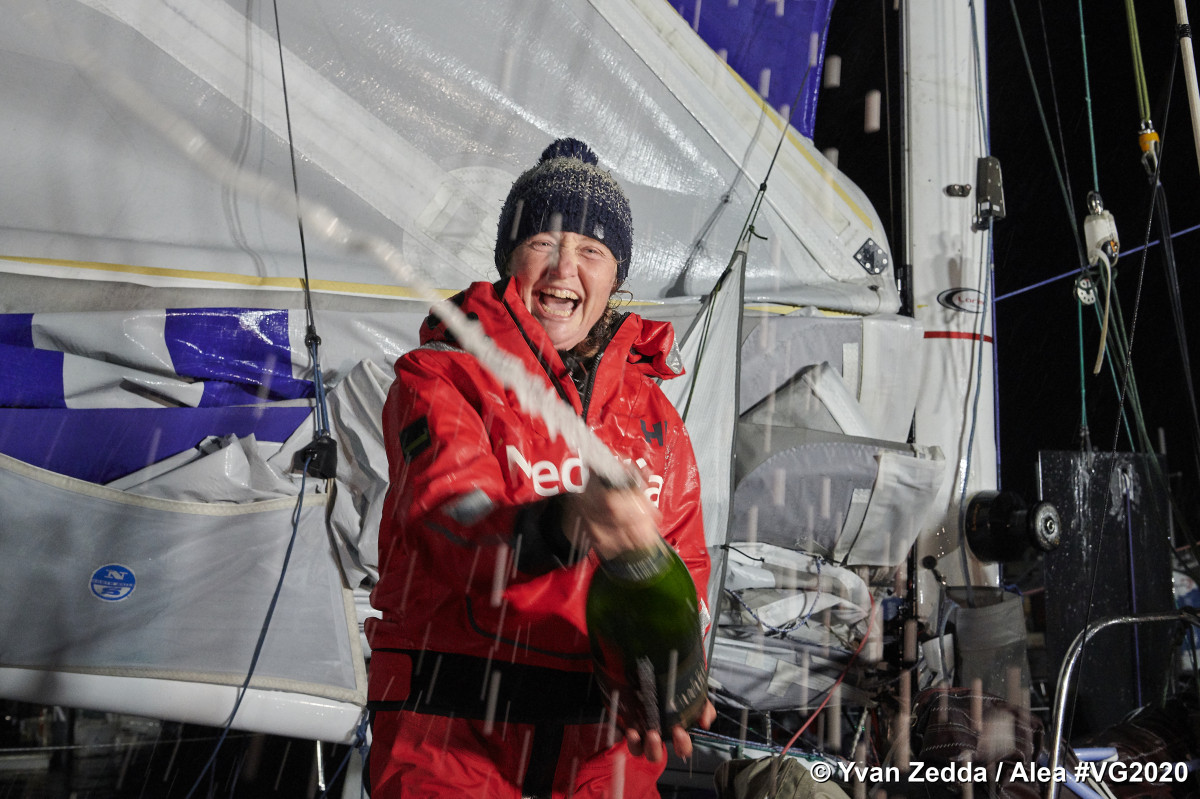 British solo skipper Pip Hare, 47, fulfilled the dream that she has held since she was a teenage sailor in her native East Anglia, England when she crossed the finish line of the Vendée Globe solo non-stop round the world race at 00:57:30 hrs on the 12th February, emerging from a bitterly cold Bay of Biscay night off Les Sables d’Olonne on the west coast of France to take an excellent 19th place.

After 95 days, 11 hours, 37 mins and 30 seconds of racing, Hare is the first British skipper to finish the 2020-21 race, and only the eighth women ever to finish the Vendée Globe in its history. Her performance on a 21-year-old IMOCA, the oldest boat yet to finish this edition, has drawn admiration from all corners of the world of French and international ocean racing, not just for her high level of motivation and drive throughout the race but for her intelligent, efficient courses and her ability to push her elderly but evergreen boat hard all the way to the finish line.

She has illuminated every aspect of her Vendée Globe, demystifying solo ocean racing with her colourful and comprehensive daily reports and her cheerful, super positive video messages. Her global following has grown exponentially not least in the race’s ancestral home, France, where her eternally sunny disposition and megawatt smile transcend any language barrier.

“She is a ray of sunshine, what she is doing in incredible,” is how veteran French ocean racer Jean Le Cam, who finished fourth in this race, described Hare, while Swiss skipper Bernard Stamm, who built Hare’s boat over 20 years ago, described her as “my hero”.

Her race was not without drama, and she overcame a significant technical problem in the depths of the Pacific Ocean. Replacing one of her rudders in big seas and 25knots of wind allowed her to stay in the race and to still remain close to a group of four faster rivals, all sailing a newer generation of foiling boats, which she had worked hard to pass. Even today just over one month on from her rudder damage, Hare was still pushing to close every last mile on the pack ahead of her and was less than 50 miles from 18th placed Stéphane Le Diraison at the line, having pulled back more than 100 miles in the final 36 hours.

Her performance is all the more remarkable considering her first IMOCA class race was in August 2019 with the Rolex Fastnet Race. Her performance merits comparison with Dame Ellen MacArthur whose 94 days and 4-hour time from the 2000-2001 race was one of Hare’s benchmarks on a boat built in the same year and launched in the same month as MacArthur’s.

So too Hare’s enduring passion mirrors that of the English racer MacArthur who finished runner up in the 2001 Vendée Globe, both living in a variety of portacabins, small boats and vans when their hand-to-mouth budgets denied them the living standards of their rivals in their formative years.

Hare grew up in a typical sailing family in East Anglia, benefiting from a Swallows and Amazons lifestyle of dinghy sailing and cruising with her extended family on a wooden Folkboat and then a Moody 33 on which they sailed often with her grandparents to Holland’s Ijsselmeer. She became a sailing instructor and then professional sailing coach and journalist. While she only took the plunge into solo racing with the OSTAR race to Newport RI in 2009, the Lightwave 395 racer cruiser she raced across the Atlantic was her home for 13 years and she sailed tens of thousands of miles as far as Patagonia and Uruguay before sailing the boat home solo across the Atlantic.

And although she has proven her ability to endure and always push to new limits on her first time in the Southern Oceans, Hare is pragmatic, prudent and largely risk averse. Certainly, although her initial budget to do this Vendée Globe was minimal, supported through crowd funding and her home port of Poole, she was always adamant that she would not go forwards into the race without the financial means to pay her costs. Her biggest decision was to charter the proven Superbgiou for the race, even if she was initially reliant on friends and favours to augment doing all the boatwork herself.

But in May last year a white knight sponsor appeared in the shape of Silicon Valley customer experience management system company Medallia. Their immediate input allowed Hare to fit a pedestal winch system and update the sail inventory of the IMOCA re-named Medallia.

After admitting to pre-start nerves, Pip Hare started the Vendée Globe as she meant to go on, pushing hard even if at first, she was not so happy with her initial weather strategies. But between the Azores and the Canary Islands she found a good route to the east and was able to keep pace with some of the faster boats in front. At the Canary Islands she was 22nd of the 33 starters and 16 miles ahead of Arnaud Boissières pushing through the western fringes of tropical storm Theta, chasing Isabelle Joschke and close to Spanish sailor Didac Costa, who is racing Ellen MacArthur’s former boat on his second consecutive Vendée Globe, and who was a long-standing close rival when they both raced Mini 650s

But Hare had a painful Doldrums crossing, and she lost miles to the boats in front, a deficit which was then compounded in the reaching conditions in the SE’ly trades which were tough for her older less powerful machine against the newer boats.

At the gateway to the south passing Gough Island and Tristan da Cunha, she was over 600 miles behind Alan Roura and 500 miles from Stéphane le Diraison. Under the Cape of Good Hope that duo were slowed in high pressure and Pip and Didac caught back miles. She then pushed harder and increasingly fast along the AEZ in the Indian Ocean to get up to 19th,  but all the time just a few miles apart from Costa. And by the Kerguelens she and Costa had caught all the way back up to Boissieres and Le Diraison again.

She lost one of her hydrogenators on November 29th and that meant keeping all her diesel reserves for power generation, meaning no heating and so she had to ride out the discomfort of being wet cold and damp in the south.

Her most annoying performance setback came on January 2nd when her wind sensor failed. The cups stopped rotating and the boat crash gybed as the information being sent to the autopilot stopped. Having lost her second wand during the first big front a few days after the start, this became a major issue as she could no longer have the pilot steer on wind mode and had no accurate wind information. Indeed, in the big winds that followed she compared notes with Alan Roura and with Boissieres. This situation left her almost always on a high state of alert, from there on the sharpness of her attack was definitely dulled.

“But I put on my big girl pants on and went looking for a solution,” Hare memorably wrote.

Staying further south under east Australia, Tasmania and New Zealand paid handsomely for Pip and she was still keeping pace with Boissieres and managed to open up many miles on Costa. At Point Nemo she posted her best ranking at 15th and remarkably was ahead of the foilers raced by Roura, Boissieres and Le Diraison, leading the group of group of six that went on to fight it out to the very end.

It was here that she encountered her most significant problem, and on January 7th at some 1,000 miles to Cape Horn, she discovered a crack in the port rudder stock. Fortunately, she was not only carrying a newly made spare rudder, but she and her team had practised a replacement procedure. A weather window – a relative term for the southern Pacific - appeared and she was able to replace the rudder and get back under way having lost two places.

After her rudder problem she was 17th at Cape Horn and in the South Atlantic she had to slow to laminate a repair to reseal the rudder tube which was letting in significant amounts of water. She lost some miles to Roura and co., but still managed to gain on the Catalan sailor Costa.

Climbing the Atlantic she was once more very much punching above her weight and worked hard to stay with this group, even given her lack of horsepower in the hard reaching trade wind conditions. Predictably, she lost two places to the new generation foilers raced by Jérémie Beyou and Kojiro Shiraishi.

She and the group ended up with a detour of over 800 miles because of the position of the Azores high pressure which forced them west on a roundabout route but she stayed in touch and until the very last night, and was still pulling back miles on the foiling boats just in front before finishing 19th today.