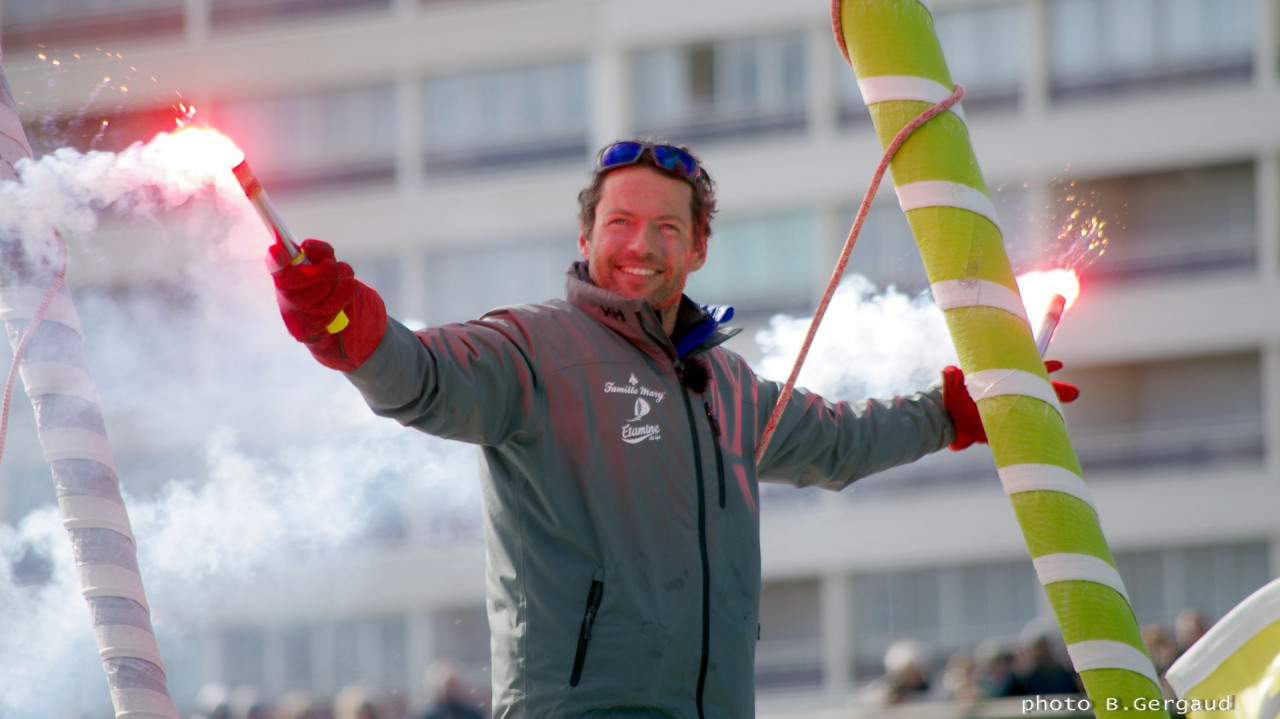 After finishing fifteenth in the 2016-2017 Vendée Globe aboard a legendary IMOCA launched back in 1998, Romain Attanasio has since then acquired a more modern boat, Fabrice Amedeo’s former Newrest-Matmut, a Farr design from 2007.

After finishing fifteenth in the 2016-2017 Vendée Globe aboard a legendary IMOCA launched back in 1998, Romain Attanasio has since then acquired a more modern boat, Fabrice Amedeo’s former Newrest-Matmut, a Farr design from 2007. So, now he’s begun a new IMOCA cycle leading up to the 2020 Vendée Globe. On his new boat, Romain will be able once again to make the most of his racing instinct.

Romain, your new boat has now been handed over in Port-la-Forêt. This one is ten years younger than Famille Mary-Etamine du Lys, your previous IMOCA. We can imagine that changes  a lot of things for you…

“They’re reallylike chalk and cheese. The rules and standards of performance moved so fast over that ten year period. I know what this type of boat is like having taken part in the 2015 Transat Jacques Vabre sailing double-handed with Louis Burton on another Farr design from the same generation (the pair finished in ninth place, editor’s note). My current boat performs much better and is lighter, but the basic philosophy is the same as on Louis’s old boat, so I know what to expect when sailing on her. She will be going into the yard next week. The two major goals will be to look at all the systems and to slim the boat down as much as possible. We won’t be doing any major work on her this year. She is due to be relaunched in April.”

So the goal for you is to be that much more competitive?

“Exactly. I completed my first Vendée Globe aboard an older boat where my main aim was to make it all the way around the world. I deliberately went for reliability. I knew that if I completed that race, it would open doors for me to return in 2020 with a boat that would perform better and that is exactly what has happened. I’m always aiming to move forward, but remain humble. I don’t have a brand new boat, but nevertheless one that should allow me to go on the attack more. Whether when I’m out training in Port-la-Forêt or racing, I should be able to fight it out with boats from the same generation as mine.”

“It may be possible one day to fit foils”

Arnaud Boissières and Alan Roura have taken the decision to fit foils to their IMOCAs from the 2008 generation. Would you be tempted to do that too?

“It’s a possibility I’m seriously looking at. Having said that, I’d like to wait and see what happens on Arnaud’s and Alan’s boats. It’s really interesting to see what they are doing, but I remain cautious. Apart from the financial aspect, I’m not convinced that the gains in performance are that clear on a boat dating back to 2007. Will the gains in performance offered by the foils when reaching make up for the boat being heavier and the losses when sailing upwind? So, I’m not rushing into that. If we do go down that road, it will be next winter.”

While your IMOCA is being worked on, you will be competing in theTransat AG2R with Pierre Rhimbault. Why have you decided to return to the Figaro class?
“It’s because I love theAG2R race. I’ve taken part four times and have often got a good result. I learnt everything on a Figaro and it’s really enjoyable to be able to return to that circuit. It’s also an opportunity to continue my quest for performance and be competitive, which I was used to doing before. This race will allow me to feel some excitement, while I wait for my IMOCA to be relaunched.”

What is your IMOCA race programme in 2018?

“I’ll be taking part in theDrheam Cup, then the Azimut Challenge. They are going to be a good way to train in race mode before the Route du Rhum, which is of course the big event this season. That is why I am going to favour solo and short-handed racing in order to prepare as best I can for that race. It’s going to be my first Route du Rhum and I really intend to be up there with the other boats from the 2008 generation and maybe some of the foilers that are still being run in… I’m setting off with the aim of getting a good result.”

What has become of your previous boat, Famille Mary-Etamine du Lys, which was a legend in the IMOCA class?

“She is up for sale for 275,000 Euros. Some Italians were planning to buy her, but they changed their mind at the final moment. Several other people are interested, including some who would like to take part in the Route du Rhum and / or the Vendée Globe. My greatest sailing memories come from this legendary boat and I’d like to see her in good hands.”