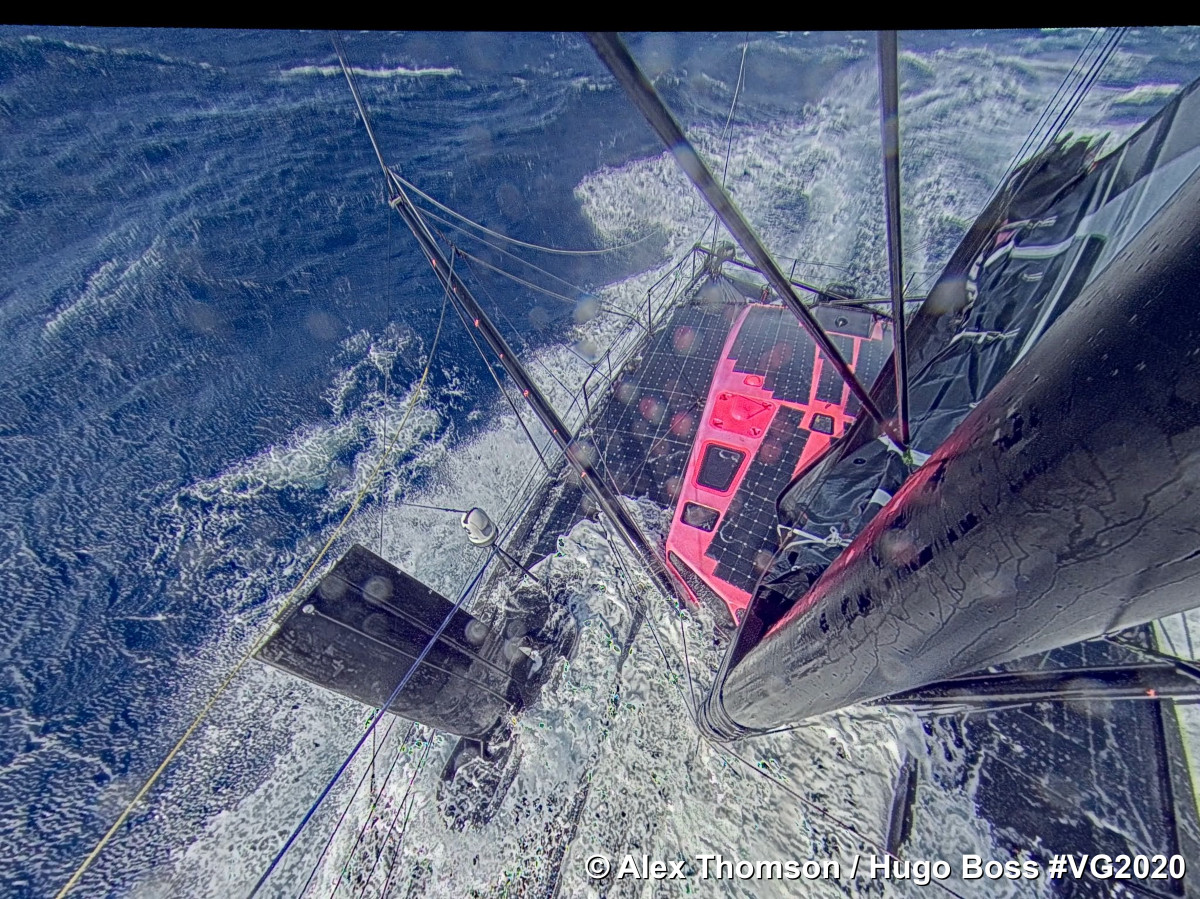 How fast was Alex Thomson going to be? That was one of the big questions leading up to the start of the Vendée Globe because the British raider had stayed away from IMOCA events and trained and prepared for this race in complete isolation.

Thomson and his team were confident they had started from a highly competitive base point in their last boat and that this new HUGO BOSS was a big step forward in performance terms. Nothing that has happened over the first week of the race has disproved that analysis.

The black boat from Portsmouth has been highly competitive, it has been pushed hard by its skipper (no surprise there) and it is about to fly downwind in the northeast trades on its strongest point of sail as HUGO BOSS leads the fleet south towards the Doldrums.

This morning, at the 08hr polling, Thomson was positioned about 430 miles northwest of the Cape Verde Islands and had put 27 miles into Jean Le Cam on Yes We Cam!. He was 155 miles ahead of Thomas Ruyant on LinkedOut in third place, his nearest rival in a new generation foiler.

In the British skipper’s mind will be the need to keep the pace up and keep pressing to stretch the fleet and give him every opportunity of getting through the Doldrums and into the southeast trades with a comfortable lead.

His course through Tropical Storm Theta was classic Thomson – full-on ­– as those chasing him opted for slightly less muscular conditions to the west, while Thomson battled big seas and winds gusting to 60 knots before he gybed out.

What we did not know initially – and has now been confirmed by his team – is that his decision to gybe came after HUGO BOSS had violently broached and ended up on its side, lying head to wind. This is the sort of event that can cause rig damage which is sometimes not evident at the time. But there are no reports of that happening and Thomson’s supporters will be hoping that that episode has no further consequences for him.

While Thomson romps southwards, the emotional drama in the race has been centred on his erstwhile rival Jérémie Beyou whose return to Les Sables d’Olonne has been painful to behold. Beyou desperately wants to be out there, a few miles across the ocean from Thomson, but his dreams of racing at the front of the fleet around the world have been shattered.

The Frenchman has been buoyed by the support he has received on arrival and is talking about setting sail again, even if he will be nearly 3,000 miles behind Thomson when he does so. Let us hope we see Charal back on the course in the next day or so…

Elsewhere in the fleet Clarisse Crémer on Banque Populaire X has been struggling to settle into the race and reported on Saturday that she had burnt her legs after spilling a hot drink. She has been having to take painkillers and will have to be careful that she does not develop an infection.

Meanwhile Kojiro Shiraishi, the Japanese sailor on DMG Mori Global One who is hoping to become the first Asian skipper to complete the Vendée Globe, has got a big problem after severely damaging the top of his mainsail when his boat gybed out of control twice following autopilot failure. Currently 3300 miles off the pace in his Charal sistership, Shiraishi will need to carry out a thorough repair if he is to have any chance of using his mainsail for the remainder of the race.

With Theta behind them and the trade winds ahead on relatively flat water, most of the skippers in the main peloton are starting to enjoy some sunshine and some fast sailing in a relatively uncomplicated meteorological environment. Among them is Boris Herrmann on SeaExplorer-Yacht Club de Monaco who was in good spirits on this morning’s radio call.

"Probably the worst moment for me was when I was completely stuck in the high pressure ridge earlier on,” he said as SeaExplorer continued south in 11th position, just over 200 miles behind Thomson. “Sometimes being in light, light winds is more stressful than being in very strong winds, and now we have reached this pretty nice zone with light breeze with not too many strategical problems."

“I expect that we can more or less go straight south today; we will reach a zone with stronger winds over the day and in the evening be up and running quite fast on our foils and probably a smaller headsail. So the job of today is to switch gears, from the big gennaker to the code zero to the smaller headsail."

“We don’t need to worry about positioning anymore, we are positioned on our way south and we go straight ahead with this nice weather which gives us the opportunity to take some time for us, to get some rest and recover, to get some sleep and enjoy the good conditions here."