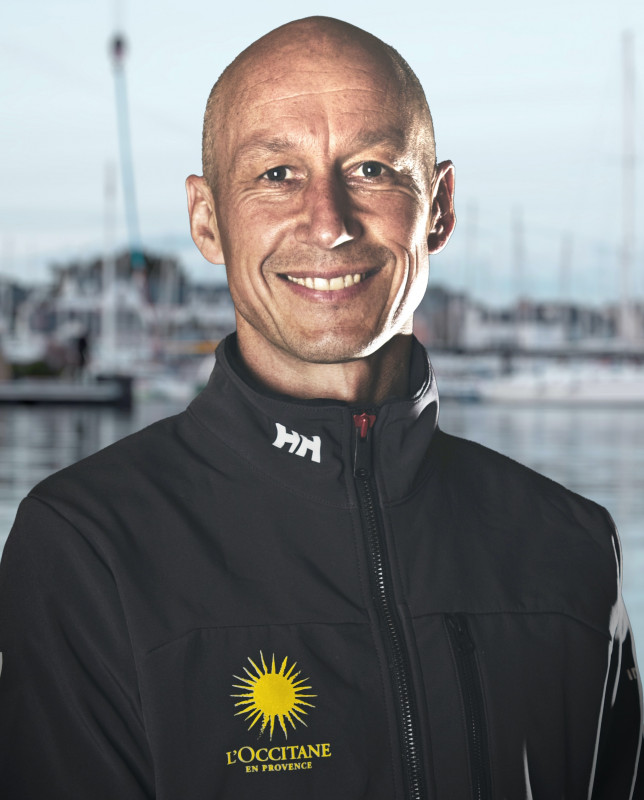 Married and a father to three boys, this self-taught sailor is a pure product of Nantes, even though his port of registry is in the Morbihan in La Trinité-sur-Mer, where he sails anything with a hull that floats. His very first season on an offshore trimaran was fantastic: two victories and four podiums. Above all, he recently won the Route du Rhum – Destination Guadeloupe!

Like the majority of oceanic adventurers, he had a logical approach to competition: via the Mini. Raced on a 6.50m craft, aboard which those who want to sample the delights of the open ocean have become emboldened since 1977, he ended up crossing the Atlantic in the traditional way, with little means at his disposal and no communication possible with the outside world. Armel first tackled the event in 2001, but it was in 2003 that he took the ultimate accolade. The outright winner of the legendary transatlantic race, some years further down the line, Armel Tripon would rely on this great performance to join the ranks of the highly demanding Figaro Bénéteau Class. It was a period synonymous with professionalism and accelerated learning at the highest level.

From the Mini to IMOCA

For seven seasons, he would amass a sizeable haul of podiums and solid results, crossing the Atlantic at least once a year, singlehanded or double-handed. The size of boat is no longer the same (10 metres) and the one-design requirement demands a great deal of rigour and a methodical approach: when all the competitors have the same boat and the standard is very high, you have to push back the limits…

That’s just what he goes on to do in Class40 after the Figaro experience, here too securing some stellar results (victory in Les Sables-Horta, podiums…). Determined and hardworking, the sailor from Nantes then manages to secure a budget for an IMOCA, the leading monohull category, that of the Vendée Globe boats. Against all the odds, he puts up some sturdy opposition against the sailing stars during the preparation races. Then in 2014, he bags a fabulous fourth place in the prestigious singlehanded Route du Rhum race, just astern of three Vendée Globe heroes: François Gabart, Jérémie Beyou and Marc Guillemot. It was a total surprise in a domain where not many expected him to have obtained this level of performance.

Mini 6.50, Figaro, Class40, IMOCA… from 6.50m to 18.28m, Armel has come full circle with offshore racing monohulls. Logically, his attention turns to the boats with several hulls, these super fast, super spectacular trimarans that create their own wind. Armel is entrusted with the helm of the Multi50 RÉAUTÉ CHOCOLAT. He learns quickly, surrounding himself with young sailors experienced on this type of boat like… Vincent Barnaud, his boat captain, with whom he participated in the Transat Jacques Vabre 2017. Of the six races at the helm of RÉAUTÉ CHOCOLAT, he treated himself to two victories, two second places and two third places, one of which was in the famous Transat Jacques Vabre!

In 2018, Armel Tripon took part in his very first singlehanded transatlantic on a multihull in the Route du Rhum – Destination Guadeloupe, which also happened to be his twentieth transatlantic passage! Just two years after his arrival on the Multi50 circuit, Armel and his Multi50 Réauté Chocolat won the Route du Rhum – Destination Guadeloupe 2018 in 11 days 7 hours 32 minutes and 40 seconds!

In 2019, the skipper from Nantes, Armel Tripon, has teamed up with the sponsor L'Occitane en Provence and has entrusted the naval architect Sam Manuard with the construction of a new generation IMOCA. This scow plan reveals its performances little by little until the Vendée Globe where it is the fastest between the outward equator and the return equator. "The boat goes fast all the time, it is less hard than many others. I wouldn't be surprised to see this type of boat blossom quite quickly in the IMOCA Class" Victim of several damages and unfavorable weather conditions, Armel Tripon finished in 11th place, but he was able to show the great feats that the new foilers could do.

Armel Tripon: "I did a chase"

"As long as you haven't done it, it's still very theoretical the Vendée Globe but when you're in it you really realize how strong it is."

Emerging from a Biscay storm which he later described as the worst winds he had to deal with throughout his entire race, Armel Tripon crossed the finish line of the ninth edition of the Vendée Globe off Les Sables d'Olon…