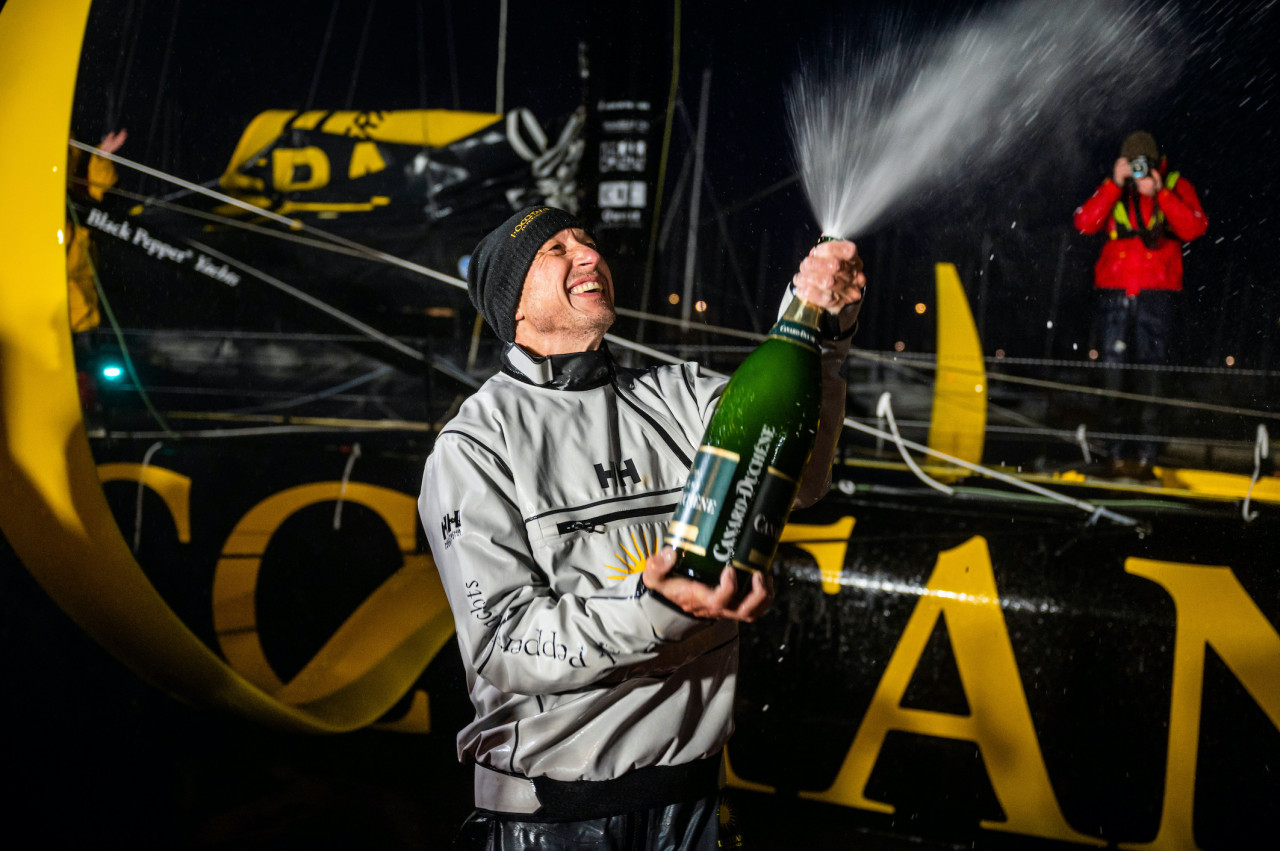 Emerging from a Biscay storm which he later described as the worst winds he had to deal with throughout his entire race, Armel Tripon crossed the finish line of the ninth edition of the Vendée Globe off Les Sables d'Olonne at 06:27:50hrs UTC this Monday 1st February to take 11th place on the ninth edition of the Vendée Globe. His elapsed time is 84d, 17h, 07mn and 50s.

Considering that his progressive Sam Manuard designed scow-bowed L’Occitane en Provence was only first launched one year ago (yesterday) and the Nantes skipper started his first Vendée Globe with the highly fancied but untested boat not having completed a significant offshore race, Tripon’s achievement displays a high level of physical and mental stamina and excellent seamanship.

Technical problems not long after the start of the race slowed him – he came close to stopping to repair – but he made a huge comeback from 32nd in the 33 boat fleet to finish 11th today.

Before taking the start of the Vendée Globe, Armel Tripon was already a proven, top ocean racer. But after 84 days since he left Les Sables d’Olonne he is now also recognised as one of the fleet’s most serene but passionate story tellers, always appreciative of situations which he describes clearly and concisely, ensuring that very many have shared and enjoyed his Vendée Globe.

He clearly has lost none of the teaching skills which he learned and used as an instructor at the Glénans sailing school centre in Brittany before he took to ocean racing. A victory in the Mini-Transat was enough to set him on his way. He then progressed to Class40 before the Multi50 and his spectacular victory in the Route du Rhum 2018. From there, together with his friend from Mini days designer Samuel Manuard and the Black Pepper yard in his native Nantes their project hatched. Together they built this mean-looking blunt bowed, black, L'Occitane en Provence, with yellow moustaches.

He had only sailed about 7000 miles before the start, abandoning on the Vendée-Arctique-Les Sables with structural issues in the bow area. But for all there might have been sceptics who thought L’Occitaine en Provence too young and untested to complete the full course, Tripon has proven them wrong and along the way has proven that the design is fast and – in many conditions – more comfortable than the other latest generation IMOCAs.

Highlights of his press conference:

"When I arrived back to the Bay of Biscay, there were squalls up to 50 knots, the sea was white, it was very brutal. But in saying that It’s a real gift to be able to live it and see this. There were crazy lights. As soon as there was a little mouse hole with a little less wind and sea I went for it, it was the biggest winds I had on the whole race. You have to travel all the way around the world to realize that there are some really bad bits on the doorstep. It was a special end to the race.

I think I'm the only one who's been around the world on threads. From the moment I had this hook problem on the J3, the storm jib was in place all the time because I no longer had a furler. I have sailed a lot with the stormjib, when there were 25-30 knots, it worked well.

I worked for two years with my mental coach on the idea that ultimately this round the world race was going to be full of unexpected things that we had to face up to. Fortunately, I worked on this aspect a lot because I had a problem on the second day of the race. There were a few hard moments, but it was a lot of fun, very intense."

On the night of February 5 to 6 (or maybe February 6), Jérémie Beyou (Charal) should reach the finish line. He will be followed, on the day of the 6th, by Romain Attanasio (Pure - Best Western).

Then between Wednesday 10 and Friday 12 February there will be a sequence of close finishes with Arnaud Boissières, Alan Roura, Stéphane le Diraison, Kojiro Shiraishi, Pip Hare and Didac Costa all due to finish in succession.

And then between Wednesday February 17 and Friday February 19, Manuel Cousin, Miranda Merron and Clément Giraud are expected.

Finally, at the end of February, Alexia Barrier and Ari Huusela are due.