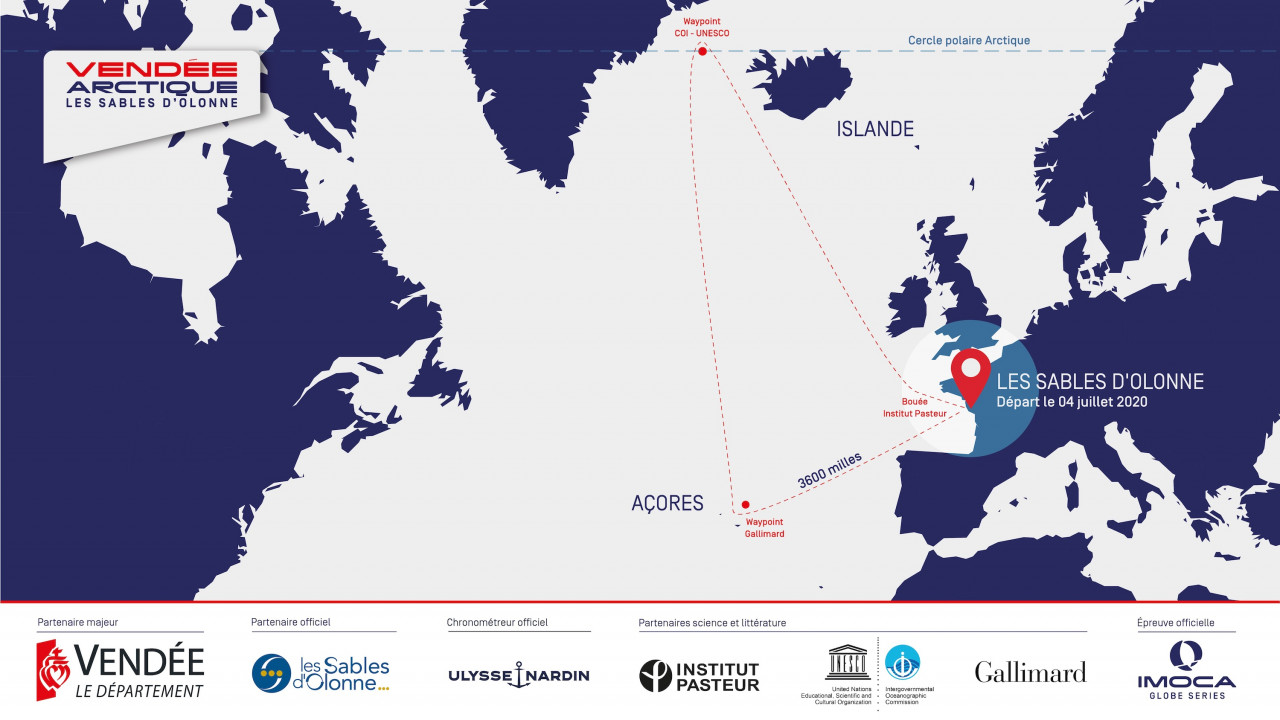 The horizon is starting to look clearer for those aiming to compete in the 2020 Vendée Globe. On 4th July, they are due to start the Vendée-Arctic-les Sables d’Olonne, a 3600- mile solo ocean race around a big triangle reaching up to the limits of the Arctic Circle.

The IMOCA and the organisers of the Vendée Globe looking towards the same goal At a moment in time when the skippers and their teams are starting work again, the prospects are looking good for the organisation of the Vendée Globe this autumn and the announcement of a summer race starting from Les Sables d’Olonne has brought a breath of fresh air to the projects. Most of the sailors have not sailed for months and they are all in a hurry now to be able to enjoy the sea and racing.

For several weeks, the IMOCA class and the organisers of the Vendée Globe have been busy finding a replacement for the two solo transatlantic races, which were unable to take place as planned this spring. This alternative has taken shape and has become the Vendée-Arctic- Les Sables d’Olonne. This event was conceived around a 3600-mile long race course, representing ten to twelve days of solo sailing for the first time on IMOCA boats between the coast of France – with the start and finish in Les Sables d’Olonne – the West of Iceland and the North of the Azores. The final list of entrants will be revealed in early June. Permits have already been applied for from the authorities with the support of the French Sailing Federation (FFVoile).

A brand new race course
“This will be the only solo competitive and technical offshore race that the skippers will be able to take part in before the start of the Vendée Globe on 8th November, and that is why it was so important to ensure it takes place,” explained Jacques Caraës, Race Director for the Vendée-Arctic-les Sables d’Olonne and the Vendée Globe. “In terms of racing, the sailors need to be in solo mode. Technically, they need to validate the modifications carried out this winter in the yards. Finally, it will also offer eleven skippers * the possibility of qualifying for the solo round the world race.”

In this race, the fleet will have to sail up to the latitude of 65 degrees North on the edge of the Polar Circle, which is further north than Cape Horn is to the South. “This is an ambitious course,” added Jacques Caraës. “With a 3600-mile long triangular course (around the same distance as a transatlantic crossing), the idea is to sail up to pick up the active weather systems in the North of the Atlantic and to get the boats sailing in various points of sail and in a wide range of conditions. With ice present to the west of Iceland, we will have similar constraints to those found in the Southern Ocean. We are going to have to put an exclusion zone in place to avoid the drift ice.” The aim of the IMOCA class was to ensure that the fleet would encounter a range of conditions and situations to allow them to find their feet before the race around the planet this winter.

The choice for the start date of 4th July was down to a question of timing: 1/ it offers the skippers sufficient time to test their monohulls after coming out of the yard following their winter refit. 2/ it leaves them plenty of time for technical reasons before the 8th November. It is highly symbolic that for this dress rehearsal, the start and finish line off Les Sables d’Olonne will be in the same place as for the Vendée Globe.

An organisation adapted to public health concerns
In order to take place, the Vendée-Arctic-Les Sables d’Olonne has to adapt to the public health situation. There will therefore not be a Race Village at the start and no reception for the general public. The sailors will be invited to make their way directly to the start line from their home port without stopping at a pontoon. Before the race, they will have to take a blood test and put themselves into self-isolation for five days. The arrangements for the finish may be more flexible, if the situation allows, but for the moment applying the precautionary principle, they will remain strictly controlled with the organisers focusing on the race itself, safety and 100% digital communication.

Ocean racing, science and literature
While the current context implies finding new ways to act, such a race remains an attractive proposal. The organisers and sailors will be doing their utmost to share their adventures and emotions each day, relating the story of the Vendée-Arctic–Les Sables d’Olonne via pictures and messages sent back from the boats. The partnership with the publishers, Editions Gallimard, will bring writers and sailors together around themes linked to sea voyages, and will offer the public some literary enjoyment. Finally, with the close links established between the IMOCA class, UNESCO and more recently the Pasteur Institute, there will be measures put in place to support medical and environmental research.

More infos about the race here