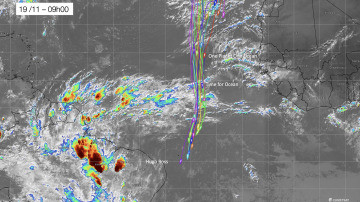 While Stéphane le Diraison on Time For Oceans attacked this morning a still mild doldrums, the leaders will spend the day off Recife. They are sailing in fine conditions with the trade winds firmly in place, allowing the latest generation of foilers to express themselves.

The St. Helena High is currently located in the eastern part of the South Atlantic. A small "low pressure" axis is located between Salvador de Bahia in Brazil and the central South Atlantic.

Between now and the end of the week, the strategy of the first competitors will be to slip into the corridor of downwind winds, in the southwest of the St. Helena High. For the moment, the objective is to keep a curved trajectory to sail with fast wind angles and to curve the route gradually as the wind veers north.

In the ideal scenario, it would be necessary to stay in this corridor until the Forties. This low pressure axis is unfortunately less and less active next week. The wind should therefore ease and it is not certain that the competitors will be able to keep a steady wind for as long as they would like. The models that will be released in the coming days will bring more visibility on the long term and on the scenario approaching the Cape of Good Hope which could become complex with many possible options. The time of important choices could be Sunday November 22nd.

The trade winds are still well in place for all the competitors who are north of the latitude of Cape Verde. They benefit from good sailing conditions and can repair small bobos. The conditions in the doldrums could on the other hand deteriorate slightly from Friday with weaker winds and more squalls.