Escoffier salutes Ferré and Soudée in the Vendée Arctique 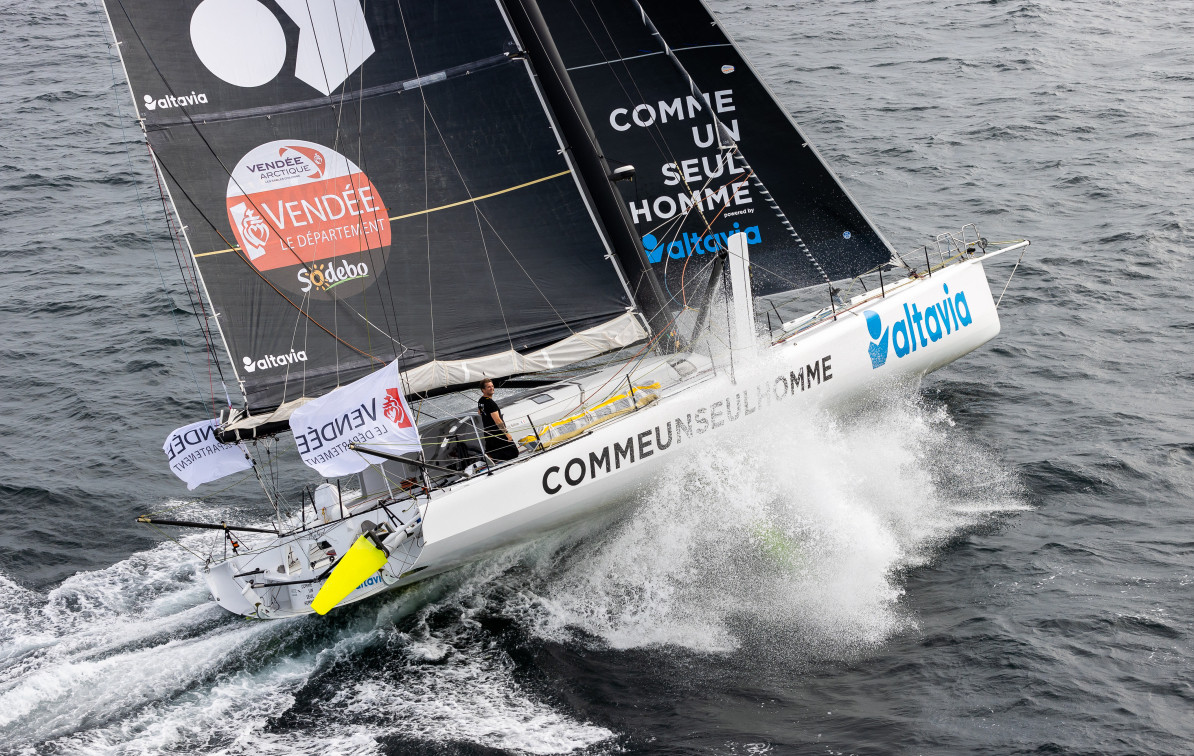 Prior to the decision by the race director to neutralise the second edition of the Vendee Arctique due to tough weather conditions on the way to Iceland, the IMOCA Class spoke to Kevin Escoffier, one of a number of IMOCA skippers watching the action from the shore.

Escoffier had been particularly impressed by the performance of two newcomers to the IMOCA ranks, Benjamin Ferré and Guirec Soudée.

The two Frenchman – 30 and 31 years old respectively – have both followed up their impressive debuts in the Guyader Bermudes 1000 with spectacular opening stages in the Vendée Arctique, with Ferré running in fourth place on Monnoyeur-Duo for a job and Soudée one place back in fifth on Freelance.com.

Both sailors have diverse and interesting backgrounds on the sea, but have taken to racing at this level as if they always belonged. Escoffier knows how hard it is to achieve what they are doing with such little experience and in old daggerboard-configured boats against more modern and well-resourced foilers.

“I am very impressed by both of these guys because the Guyader Bermudes 1000 Race was their first race in an IMOCA and it is not very easy to deal with a bigger boat and to discover a bigger boat,” said Escoffier, taking a break from his latest test sail on his brand new PRB.

“I am also impressed because the IMOCA Class is not only about sailing but also about managing a project and these guys are not only sailing well but dealing with 100% of their projects – the money, the technical details on their boats – so, for them, it is not only a fight on the water but also a fight on shore.”

The early stages of this race have seen a fascinating few days on the eastern Atlantic as the 24 skippers still racing tackled a super-fast start from Les Sables d’Olonne on Sunday and then had to cope with two big areas of calms before settling into a downwind airflow taking them north towards Iceland.

An interesting feature has been how the daggerboard boats chose a shorter route on the eastern side of the course that has allowed six of them to fill half the spots in the top-12 on the leaderboard after four-and-a-half days at sea. Escoffier says this underlines the dilemmas for skippers on foiling boats when it comes to following the optimum routing for them based on their polars or expected performance.

“We have seen that when you’ve got foils, the routing given by the software we are using to find the fastest path for the race requires you to sail many more miles than the older boats with daggerboards. But the weather forecast is not 100% reliable and when you are not able to achieve the routing given by the software, you may finish in a light spot and the boats that have done less miles, even if they are slower, may be in front of you.

“So we can see the difficulties for the foilers compared to the daggerboard boats. When you’ve got someone like Charlie Dalin or Jérémie Beyou that are able to keep pace with the routing, they are able to manage it and stay ahead – but it is not that easy to achieve – we can see that,” added Escoffier.

A good example of a skipper sailing a daggerboard boat well in this race has been Éric Bellion at the helm of the old “Hubert,” the Jean le Cam boat from the last Vendée Globe now under the colours of COMMEUNSEULHOMME powered by Altavia. Bellion has been right up there throughout this race and is currently in the upper reaches of the middle pack in 12th position.

“He is racing well,”commented Escoffier. “The foilers are boats that are much more complicated to manage than the daggerboard boats and I think when you’ve got an all-purpose and easy boat to use, even if you have only been racing for a while like Éric Bellion – who is a good sailor – you are able to play with the best of the other boats. Again it is very nice to see new skippers in the race that are doing a good job, not only the same names that we had before.”

Bellion is enjoying his second race of the season and is happy with his position even if the second area of calms drove him round the bend. “It was awful for me,”he said as his boat surfed downwind towards Iceland. “It was the worst high pressure that I have experienced in my life. There was no wind at all and quite big waves, so I had no option but to roll my headsails and wait. It was awful because you want to sleep, you want to eat but you are so nervous you can’t do anything except watch the wind coming and it never comes.”

The Frenchman who finished in ninth place in the 2016/17 Vendée Globe, said his decision to stay to the east early on paid big dividends for him and he has had no big issues on his return to the racecourse. “I am happy in two ways,” he explained. “The first one is that I haven’t forgotten how to manage the boat and how to manage an IMOCA and I am doing it my way with a lot of happiness and confidence. The second is that with Jean Le Cam we are building (new boats) without foils with David Raison and this pleases me because it shows there is a way to be competitive without foils.”

The decision to shorten the course for the Vendée Arctique was welcomed by Escoffier who believes it was the right call given the weather conditions around Iceland and a decision that will have no affect on the sporting outcome of the race. “It’s not up to me to decide, but I think yes it was the right choice,” said Escoffier. “The course was very far north and if you have an issue up there, it is not easy to come down to find a place for these boats. I think it won’t change how interesting the race is so, for me, it is the right thing to do because it will not change anything on the sports side and if we have more boats on the finish line, it will be better for everybody.”