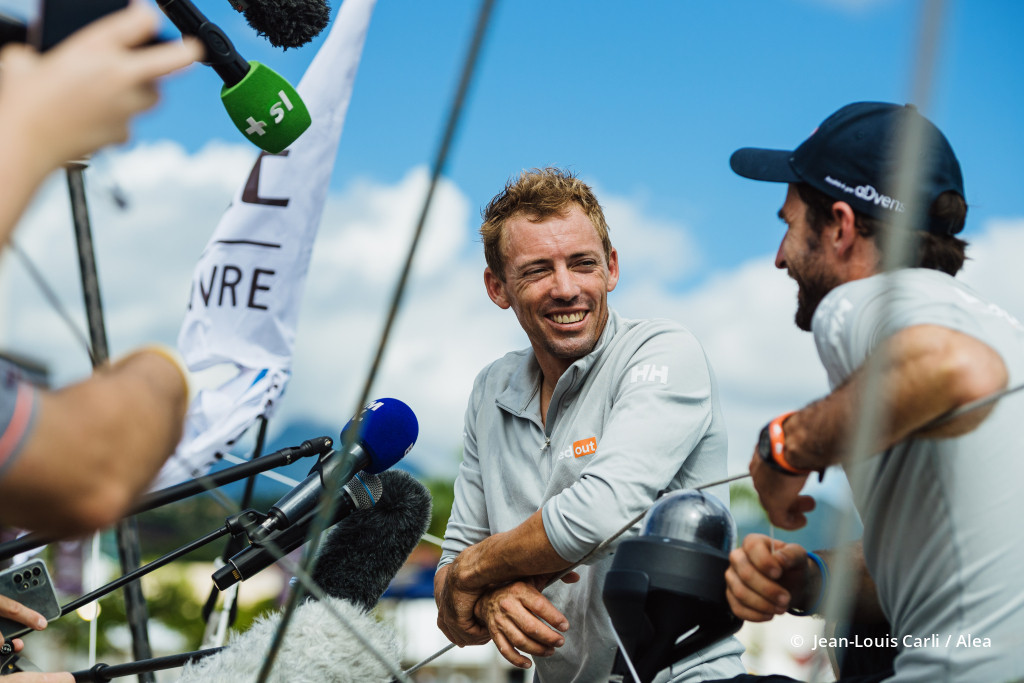 In October 2023, the Transat Jacques Vabre Normandie Le Havre will celebrate its thirtieth anniversary in Le Havre before the famous two-handed Tranatlantic race heads to Martinique, where the finish of the race known as the Route du Café will be hosted for the second time in a row.

It is an anniversary that nearly 100 duos across the three open classes -IMOCA, Ocean Fifty and Class40 - have already marked on their calendars as the highlight of their 2023 season. And this 16th edition of the race, which is the longest of the Transats, will once again see a very popular celebration take place in Le Havre which has been the historic start port since 1993.

And so too at the end of the highly intense, top level race between Normandy and Martinique which follows three courses of different, appropriate lengths, the grouped finishes into Fort-de-France also promise a real festival atmosphere.

Thirty years of the Transat Jacques Vabre Normandie Le Havre represents a beautiful age, a great proud history which has been written ove/r the years and which marks the maturity of a race which always offers almost infinite possibilities and continues to evolve and develop.

The maturity the bi-annual event ensures it retains an important position on the ocean racing calendar. It is a major, classic race which has found its natural home in Normandy and in Le Havre, France's leading coffee port which has been its historic starting port since 1993.  And from the 20th October – the opening date of the Race Village – a big public festival around the Paul Vatine baisin runs right through until start day on the 29th October. It is a hugely popular rendez-vous which draws a big public attendance but which minimises its environmental footprint, which has been recognized as a benchmark event by ADEME* since 2009.

Thirty years is also a good time to refresh memories of the race’s proud history. Since 1993 no fewer than 534 sailors have braved the Atlantic, racing between Le Havre and the most beautiful coffee  producing destinations.

Although the first Transat Jacques Vabre was raced solo and crowned the Le Havre skipper Paul Vatine as victor, it became double handed from 1995, and that format has continued. And there are many, many famous duos who have won the the Route du Café: Paul Vatine who scored the double in 1995 alongside Roland Jourdain, Franck Cammas-Steve Ravussin, Yves Parlier-EricTabarly, Franck-Yves Escoffier-Karine Fauconnier, Loick Peyron-Jean-Pierre Dick, Charlie Dalin-Yann Eliès, and so many other talented partnerships have marked the event with their multiple wins and their complementary skills and personalitiies.

In 2023 the names of three other winning duos will be added to this long list. A multi-class race, the Transat Jacques Vabre Normandie Le Havre will be the highlight of the season in three classes. In IMOCA, the new Raison and Koch-Finot-Conq designs – due for 2023 launches -  will challenge the best 60-footers of the 2021-2022 generation. An amazing field of 40 IMOCAs are due at the start, almost double the entry for the 2021 edition. Ten Ocean Fifty trimarans are expected to compete, a record field for the 50 footers which also corresponds to the number of entries set by this class which wishes to control its growth. And no shortage of intensity and excitement in Class40 which will have nearly 50 participants for a Route du Café which should be sold out.

Three courses of different lengths which should mean grouped finishes

Beacause of the differences in speed potential of the three classes, Race Direction are working on developing three different courses. This innovation was tested in 2021 to guarantee grouped arrivals in Martinique, this making sure everyone shares the one big party and maximum media exposure for all competitors. The Class40s race only in the North Atlantic and will have some 4,500 miles to cover, which makes the Route du Café their longest transatlantic race. As for the Ocean Fifty and IMOCA, they will race a course into the South Atlantic with two passages through the Doldrums and a total of nearly 6,000 miles of racing

There are many different elements which make the Transat Jacques Vabre Normandie Le Havre a unique event. It is a globally important, major race whose historical partners, the city of Le Havre and the JDE group (holders of the Jacques Vabre coffeee brand) are also the organizers. They will be able to rely on the Normandy Region and for the second consecutive year on Martinique, the land of origin for coffee in America which awaits sailors from mid-November.