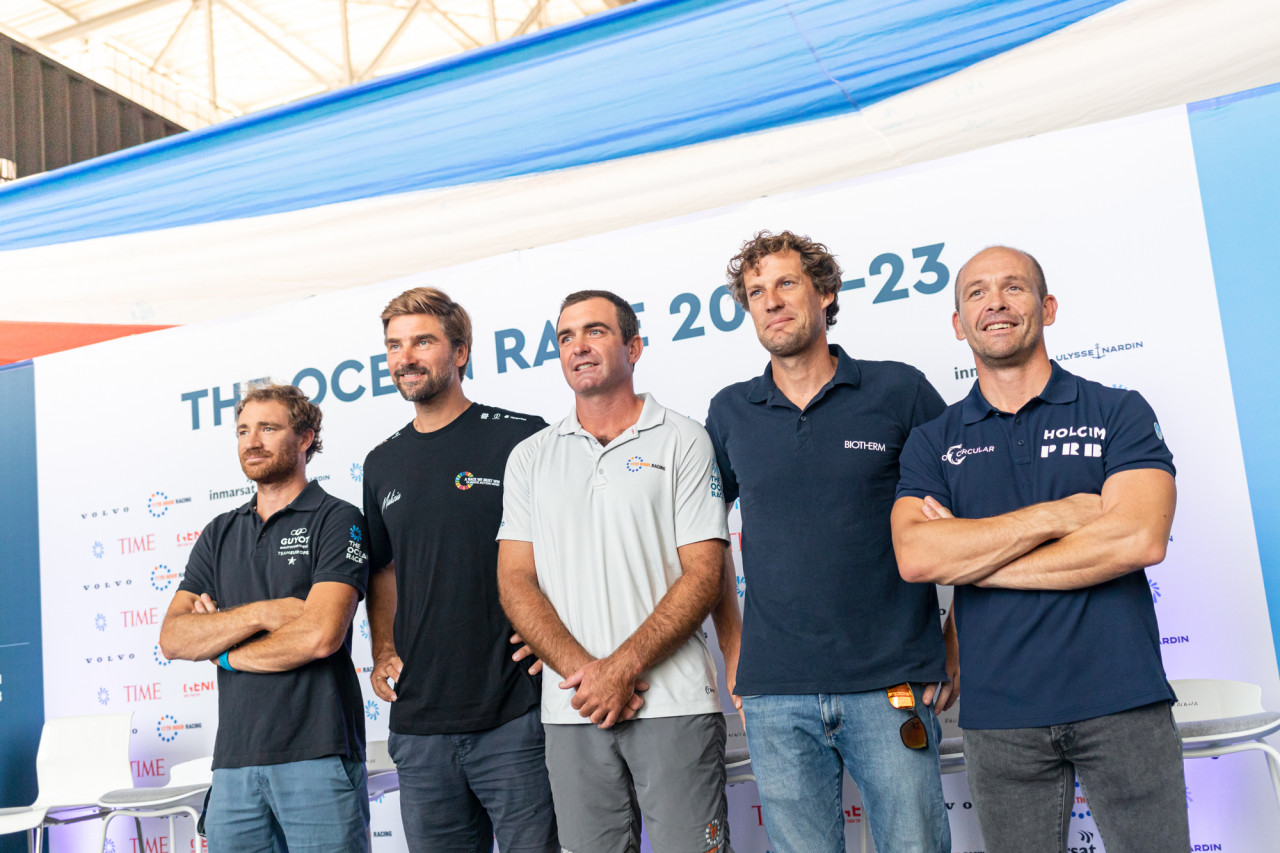 The participation of the IMOCA Class in the next edition of The Ocean Race was formally launched in Lorient this week as the skippers of five teams were presented to the media ahead of the start of the race from Alicante in January.

This will be the 14th edition of The Ocean Race – formerly the Whitbread Round the World Race and the Volvo Ocean Race (VOR) – which is regarded as the unofficial world championship of fully-crewed ocean racing.

The IMOCA crews will take on the 32,000-nautical mile challenge, that features seven legs and nine host cities, alongside the one-design VO65 fleet. So far five IMOCA teams have been unveiled, but there are a few more expected.

The participation of the IMOCA Class in this race is the result of a long process of evaluation, co-ordination and negotiation between the Class and the race owners, represented at the press conference in Lorient by the Swedish Ocean Race managing director Johan Salén.

Antoine Mermod, the IMOCA Class president, said he had no doubt that participation in The Ocean Race is now a viable model for IMOCA teams and he expects it to grow in future races.

“It’s been a long journey – it started at the start of the last Ocean Race four or five years ago,”said Mermod. “Building a race is a very, very hard job but since the first day with Johan we were really convinced that were building a very strong model together, both for IMOCA and for The Ocean Race that will help both IMOCA and The Ocean Race to grow and to establish a very strong position.”

Mermod also said that the support of IMOCA skippers had been critical to getting this new race for the Class off the ground. He said key skippers had fully supported the idea of taking part in what is a legendary race. “In IMOCA we are very lucky to do the Vendée Globe – a legendary race – and to be able to do the other legendary race, The Ocean Race, was very important for the skippers,” he said.

Salén said the organisation of the next race was now well underway with teams, host cities, partners and suppliers forming a network that, he said, was “buzzing” with activity ahead of the start. “I hope we will deliver an event which will be an adventure and an experience of a lifetime for everybody involved,” he said. “It is really good to be here and we can forget the last few years and Covid and all that, and look forward and it’s going to be fantastic.”

The IMOCA crews will sail with four or five on board, including at least one female sailor and an Onboard Reporter, on state-of-the-art foiling monohulls, most of which have been built only for solo or double-handed racing. However in two cases – 11th Hour Racing Team-Mālama and Malizia-Seaexplorer – they have been designed with The Ocean Race in mind.

The race route will offer a massive challenge and includes an epic Southern Ocean leg, when the teams will sail from Cape Town in South Africa non-stop all the way to Itajaí in Brazil. This 12,750-mile leg is being seen as evidence that The Ocean Race is returning to its roots, with the challenge of the Southern Ocean at the heart of it.

Escoffier, who won The Ocean Race with Dongfeng Race Team in 2017/18, is looking forward to getting going in his new Holcim-PRB IMOCA. “We are looking forward to being at the start and looking forward to competing against these great teams,” he said at the press conference at La Base marina in Lorient. “I’m sure we will have great races with fast boats, and very impressive boats as well, and we will go to cities that haven’t seen that many monohulls flying and I think they will be very happy to see us doing a few wheelies!”

Boris Herrmann said the IMOCA participation in The Ocean Race was a historic development in offshore racing. “I think it’s a great start of something new,” he said. “It’s a new era in offshore sailing, as everyone has said. It’s a very different style of sailing on these boats – much more technological and very different crew work – with everyone much more high level and more multi-faceted.”

Francesca Clapcich, the Italian former world champion in 49er FX who took part in the last Ocean Race, is part of the 11th Hour Sailing Team. She spoke about the challenge of racing an IMOCA at full potential on the global race course. “It’s going to be a very different race compared to the last one,” she said. “There will be less people on board but at the same time there is lots to do. The speeds are higher and it’s all about understanding the reliability of the boat and making sure that we are ready for anything out there.”

Clapcich said that working well together would be the key to success. “It’s about teamwork as always, no matter if you have 10 people on board, or five or two,”she said. “It’s about working together really well and helping each other in hard moments and enjoying it.”

The British former Olympic sailor and two-time veteran of The Ocean Race, Annie Lush, reminded everyone that the IMOCAs are not the biggest boats on which to race around the world. “We all have different strengths and with this boat it is about working out how to use them all and a little bit about how to fit everyone in the cockpit, which is quite hard,” she said.

Of course The Ocean Race is the big target for the five teams who have been announced. But before they get to the start in January, they will compete until Sunday in the Défi Azimut. Next, four of them will also see their skippers participate in the solo Route du Rhum-Destination Guadeloupe that starts from St Malo on November 6th. All of them will be keeping their fingers crossed that they complete that race in one piece and then deliver their boats back to Spain for The Ocean Race start on January 15th. It’s going to be a busy few months even before they set sail as the first ever IMOCA entrants in one of the classic events in world sailing.