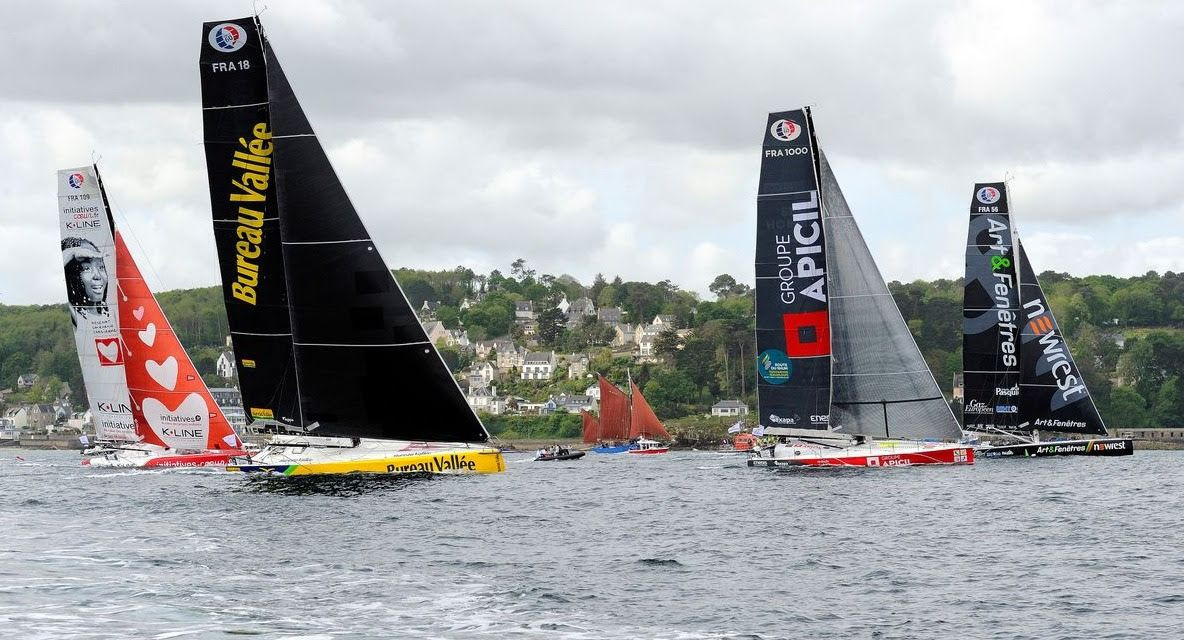 The first event on the IMOCA Globe Series calendar for 2019, the Bermuda 1000 Race, will set sail from Douarnenez (Brittany) at 1300 hrs local time on Wednesday 8th May...

The first event on the IMOCA Globe Series calendar for 2019, the Bermuda 1000 Race, will set sail from Douarnenez (Brittany) at 1300 hrs local time on Wednesday 8th May. On the programme, a 2000-mile solo race course finishing in Brest, via the Fastnet and the Azores. Eighteen sailors representing six nationalities will be lining up, including a number of rookies, who will be making the most of the event to gain their first important solo experience aboard an IMOCA. Whatever their ambitions in the event, all of the competitors will be attempting to complete the race to clock up some precious miles in order to be selected for the 2020 Vendée Globe.

Few sporting events can boast that the number of entrants has tripled from one year to the next. That is however the case for the Bermuda 1000 Race, which last year attracted six IMOCAs for its maiden edition (five of which were sailed solo and one double-handed). Organised within the framework of the Douarnenez Grand Prix by the Sea to See company in collaboration with the IMOCA class, this year, the event will bring together eighteen boats, or in other words almost as many as for the last Route du Rhum. Ten of them will before that have taken part in the Pom’Potes Challenge, speed runs organised off Douarnenez from 4th to 6th May.

Among the eighteen registered for the Bermuda 1000 Race, seven sailors will be taking part in their very first IMOCA solo race, including two who will be on very good performing foilers, Sébastien Simon and Giancarlo Pedote. Three other newcomers will be setting sail on IMOCAs built for the 2008-2009 Vendée Globe: Maxime Sorel, Clément Giraud and Miranda Merron. The Belgian skipper, Denis Van Weynbergh will also be discovering his boat, which is none other than Nandor Fa’s old monohull. That will also be the case for the British sailor, Pip Hare, the new owner of the legendary Superbigou. “We are pleased to be welcoming these new projects,” declared Gwen Chapalain, organiser of the Bermuda 1000 Race. “It is going to be interesting to see what these sailors can do in the race, as they lay down the first foundation stone for their Vendée Globe campaign. Tomorrow, it will be these men and women, who will be writing the latest pages in the history of solo round the world sailing.” Jacques Caraës, the race director for the Bermuda 1000 Race and the next Vendée Globe, is also pleased to see these newcomers arriving. “The race is going to be very important for them, but also for the Race Directors. We will be able to see how far they have come, how they behave and if they are in with a chance,” explained Jacques, who will be assisted in his work by Hubert Lemonnier and Guillaume Evrard.

Apart from Miranda Merron and Pip Hare, two other women will be competing in the Bermuda 1000 Race, Sam Davies and Alexia Barrier. We will therefore be able to see four of the six women currently preparing for the 2020 Vendée Globe. Only Clarisse Crémer and Isabelle Joschke will be missing. We will also see four competitors who took part in the 2016-2017 Vendée Globe (Fabrice Amedeo, Romain Attanasio, Arnaud Boissières, Stéphane Le Diraison) and five others who raced in the 2018 Route du Rhum (Yannick Bestaven, Manuel Cousin, Boris Herrmann, Ari Huusela and Damien Seguin).

The Bermuda 1000 Race will bring together an international line-up with six nationalities represented: 11 French sailors, three British women (Sam Davies, Pip Hare, Miranda Merron), one from Belgium (Denis Van Weynbergh), a German (Boris Herrmann), an Italian (Giancarlo Pedote) and a Finn (Ari Huusela). This is all very pleasing for the IMOCA class for whom internationalisation is one of the priorities.

A varied race course, a pit stop allowed, a time limit in place

The eighteen sailors will do battle on a 2000-mile race course, which will be announced before 2000hrs on Monday 6thMay at the latest, depending on the forecast weather conditions. The race will start from Douarnenez Bay at 1300hrs CET on Wednesday 8th May with the boats finishing in Brest around a week later. Several options are possible as far as the course is concerned. The most likely course will be a loop around the Fastnet and a waypoint off the Azores, before they make their way back to the finish. The Race Directors have given themselves the possibility of sending the boats off in one direction or the other. It may also be the case that the waypoint be moved away from the Azores, or that there will be two loops forming a sort of triangle between the Fastnet and la Coruna. Whatever happens, we can expect a varied race course with plenty of manoeuvres to carry out.

To offer the competitors every chance of completing this course, the boats will be allowed to carry out a pit stop or moor up and receive assistance. “We have taken into account that this is the first race of the season, and that the boats still need to be fine-tuned. We don’t want to ruin the chances of any competitor when only minor repairs are necessary,” added Jacques Caraës. The Notice of Race states that any pit stop must be declared to the Race Directors and may not last les than four hours or more than 24.

In addition to that, a time limit has been determined based around the time of the first boat. “That will force the competitors to keep up a certain pace and get into race mode and not continue as if this was a delivery trip to clock up the miles with less sail up,” stressed Jacques Caraës.

An important event to clock up the miles

The Bermuda 1000 Race is one of the big three races in the 2019 Globe Series along with the Rolex Fastnet Race and the Transat Jacques Vabre, but it is the only one to be raced solo. We should add that this IMOCA World Championship has been set up around a programme of solo and double-handed races, which are also being used as a way to select sailors for the 2020 Vendée Globe. If more than thirty competitors complete the registration requirements for the solo round the world race, which is likely to be the case according to Jacques Caraës, the skippers finally selected will be those who have clocked up the most miles in races on the Globe Series calendar.

That is the case for the Bermuda 1000 Race, with 2000 miles to be added. These are very precious miles, particularly for those who did not compete in the Route du Rhum or who did not complete the race. This is the case for nine sailors in the Bermuda 1000 Race (Sébastien Simon has however been automatically selected for the next Vendée Globe, as he will be sailing a brand new IMOCA in this race). The selection process, where clocking up the miles is so important, partly explains the success of this event. “The class’s decision to set up this system was a good one, as it helps strengthen the circuit and bring together a lot of competitors in the different races, including the Bermuda 1000 Race,” confirmed Gwen Chapalain.

Whether we are looking at rookies or more experienced sailors from the circuit, the eighteen racers are bound to learn a lot during this race which has been given a weighting of 2 in the Globe Series. We can look forward to an exciting battle. To finish, we should say that after his great performance in the Route du Rhum (5th place), if he wins, Boris Herrmann could take the lead in the championship.

The sailors registered for the Bermuda 1000 Race: