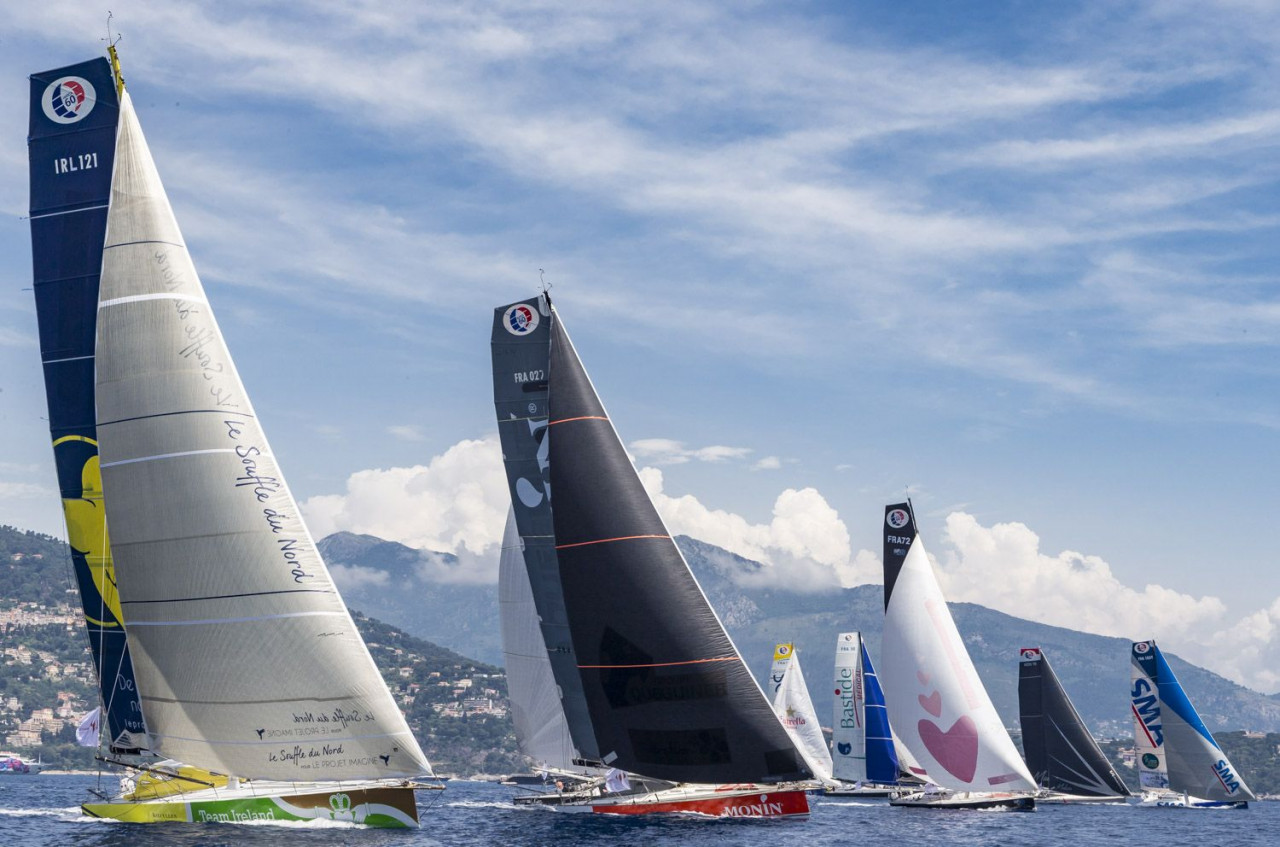 Monaco 3rd June 2018. At precisely 1.00pm today the gun was fired for the first Monaco Globe Series by Yacht Club de Monaco President, HSH Prince Albert II, from the elegant motor-yacht M/Y Pacha III (1936), on which were members of the royal family there to support Pierre Casiraghi competing with Boris Herrmann on Malizia II.

Earlier, the Yacht Club de Monaco President greeted skippers at a brunch in honour of Irishman Enda O’Coineen, who competed in the last Vendée Globe, here in the Principality to support his compatriot Joan Mulloy paired with Thomas Ruyant at the helm of Kilcullen Team Ireland.

The nine 60-footers are off on a double-hander, unassisted non-stop race, the first stage of the new IMOCA 2018-2020 world championship. Organised by the Yacht Club de Monaco, the meeting is a chance for participants to gain the maximum number of points towards qualifying for the Vendée Globe 2020.

An east-south-easterly breeze filled the mainsails providing a unique spectacle at the start. As they sped away at nearly 12 knots heeling on a port tack, the whole fleet set the tone in the first few minutes of racing. Leeward of most of the competitors, SMA skippered by Paul Meilhat and Gwénolé Gahinet were in the lead closely followed by the Monegasque boat Malizia II.

Isabelle Joschke and Alain Gautier on Monin also played a winning hand, bearing away to leeward at the start. A good decision allowing them to get up speed and take the lead.  But it’s too early to make any predictions at this point. One thing is certain, what comes next promises to be fast-paced as the fleet attacks the windiest section during the night, with a storm forecast for Corsica with gusts and possibly hail. “The conditions forecast will require many manoeuvres, so it’s going to be physically tough,” commented Pierre Casiraghi. Note: the positions of all the boats are tracked every 30 minutes and published on a map of the course: http://bit.ly/2JdTu4i

In permanent contact with competitors, Race Director Guillaume Rottee will adapt the almost 1,000nm course as required depending on the weather conditions.  Currently, the fleet will head for the Strait of Bonifacio down Corsica’s west coast, a zone they should reach around 5.00am early Monday morning. Then there is a long descent to the Gulf of Mondello in Sicily, passing in front of Circolo della Vela Sicilia, Challenger of Record of the 36th America’s Cup and organiser of the Palermo-Montecarlo. The 18 sailors then set course for south Sardinia and not Mahon in the Balearics. After an ascent toward Cagliari they then head back to the Principality to the finish expected sometime in the morning  on Friday 8th June.

Behind the scenes on the pontoon

Shortly before the start, skippers were busy fine-tuning their rigs and taking time out to talk about their expectations. “I really couldn’t wait to get here,” said Stéphane Le Diraison, at the helm of Boulogne Billancourt, “It’s looking good. We know the strengths of the other competitors, and the Mediterranean is a playing field that gives everyone a chance – the race is really open.”

While some pairs are well-oiled machines, it is not the case for everyone, like Manuel Cousin sailing with Alan Roura: “We’ll find out during this race, but we know each other having sailed against each other and I have total confidence in our potential.”

Just arrived on the circuit, Joan Mulloy is sailing here with Thomas Ruyant on Kilcullen Team Ireland. “Thomas is an excellent sailor and I am going to learn a huge amount from him. I am super-happy to be here on the start!”

28.02'Fighting Spirit' Alexia Barrier Fi…On a perfect Sunday morning, 28th Februa…25.02Sam Davies: What it really meant to…When there are 33 skippers in a Vendée G…23.02Miranda Merron: The privilege of sa…Some Vendée Globe and IMOCA sailors are …22.02Ari Huusela and STARK awarded as th…Finnish Vendée Globe skipper and his mai…20.02Manuel Cousin : "You have to live y…That was the maxim that drove Manuel Cou…18.02Miranda Merron : "I’m pleased and p…“I was in a good mood most of the time. …
All news and videos
News