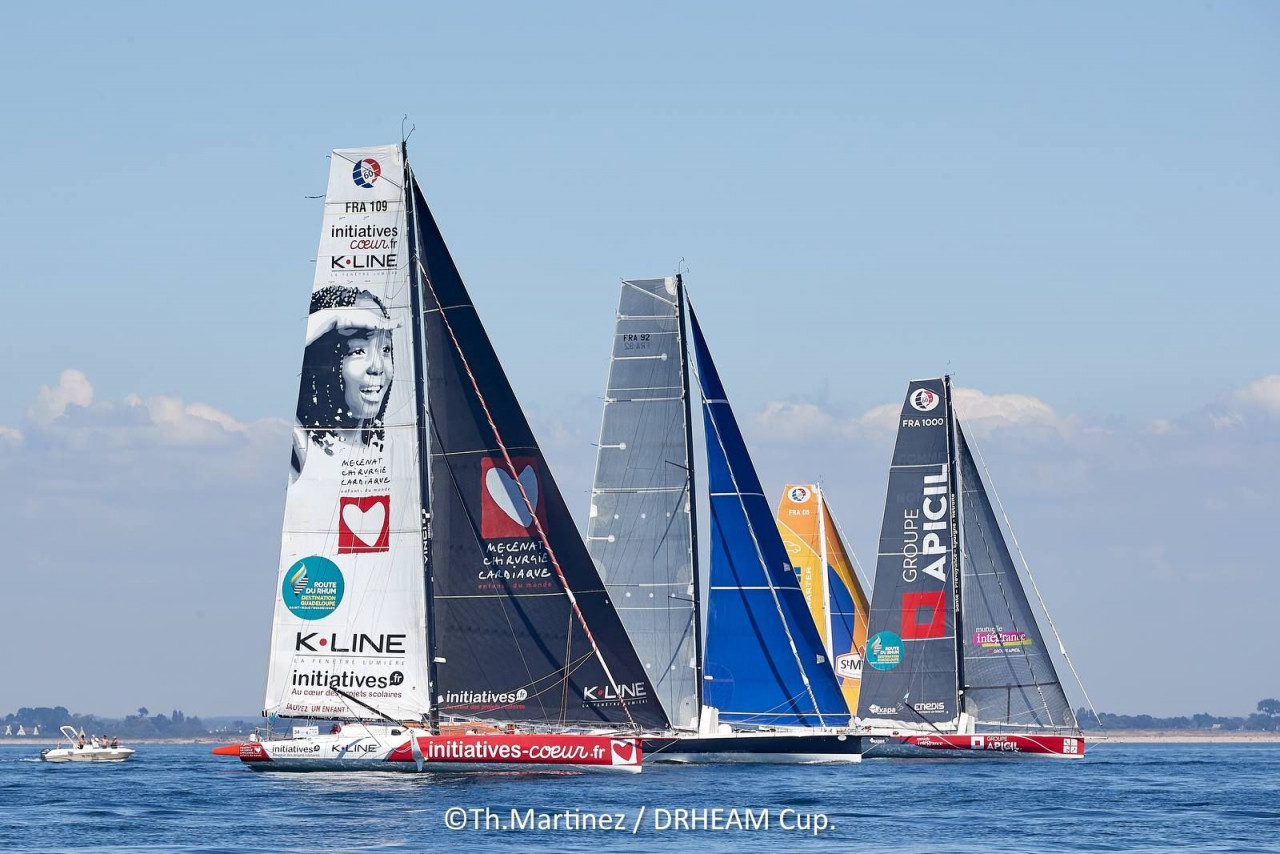 We were expecting conditions to be tough during the second edition of the DRHEAM CUP Destination Cotentin, which rounded off this weekend in Cherbourg. This turned out to be the case and it came with the added bonus of a female double, which is a first in IMOCA’s long history. Ultimately, the final podium rewarded the tenacity of sailors, the quality of their options and their solid pre-season preparation. As such, Sam Davies (Initiatives Coeur), Isabelle Joschke(Monin) and Yann Eliès (Ucar-StMichel) secured a fine podium where the lack of parity came as a rather nice surprise...

Conditions were tough, due to a frequent absence of breeze at the start and end of the race, though conditions were also more boisterous at times, particularly as the fleet rounded Fastnet in 25 knots of wind. As a result, the sailors had to play around with whatever wind they had, contend with seas that were sometimes rough and keep an eye on any shipping, which is always a threat in this zone. In the end, it was Sam Davies who secured her first fine victory in IMOCA, a result which augurs well for her participation in the Route du Rhum, Destination Guadeloupe. It’s a victory to be applauded and noted in IMOCA’s archives since solely Ellen MacArthur had won a singlehanded IMOCAevent up to that point. That was some 16 years ago during the Route du Rhum 2002. Watch out though as Sam has warned that this female double “is a first and not the last!”

After a great battle in the climb up to Fastnet, Sam Davies and Isabelle Joschke had to contend with calm conditions in the English Channel and were virtually neck and neck as they closed on the finish line. Ultimately, it was Sam who took the win, crossing the line after 3 days 20 hours and 14 minutes of racing, just 13 minutes ahead of Isabelle Joschke. Sam Davies: “I’m very proud. It’s the first singlehanded IMOCA race I’ve won. I led the way for most of the race and I won the prologue too so I couldn’t have hoped for better! At the end, negotiating the calms, I wasn’t frightened. I remained fairly relaxed and I’d mentally prepared myself”. It came as a great satisfaction for Sam, who has been rewarded for her efforts during her major winter refit, which has visibly taken her boat to a whole new level in terms of performance.

For her part, Isabelle Joschke was competing in her first singlehanded race on this boat and she was delighted by her performance and proved that she is a force to be reckoned with: “I was slightly apprehensive about setting sail in this competition and I just had to hope that I was able to manage everything all on my own. All in all, everything went well and I’m pleased with the way I manoeuvred. I’ve really turned a corner by competing in this race and taking second place as it confirms the fact that I’m more than capable of manoeuvring an IMOCAon my own in what were pretty calm weather conditions.” For Yann Eliès, who rounds off the podium: “The light airs proved to be more complicated, as this type of weather is not by boat’s strong point. I’m happy with this exercise and it was good to tick this race off the list in my preparation for the Route du Rhum. It’s great news to have these two women giving the guys a thrashing. It’s sometimes said that sailing is a ‘male’ sport and we suffer from this image. Samantha Davies and Isabelle Joschke have proven that the reverse is true, so congratulations girls!”

For Damien Seguin (Groupe Apicil), for whom the DRHEAM CUP was his first singlehanded IMOCA race, the results have been positive on the whole: “I’m happy with my race and I feel like I’ve done a good job. It wasn’t easy. Conditions were extremely varied. Above all though, I felt comfortable on the boat”. Damien finished 4th ahead of Romain Attanasio and Alan Roura, who was just finding his feet on his boat after she was recently equipped with her first foil. Alan was able to test La Fabrique’s new level of performance, which appears to be running very well and posting good speed on her foil.

The last third of the fleet to make the finish in Cherbourg comprised Stéphane Le Diraison (Boulogne Billancourt),Manuel Cousin (Groupe SETIN) and Erik Nigon (Vers un monde sans SIDA). The first two, whose tough negotiation of the Raz Blanchard cost them dearly,ended up being outpaced by their predecessors. As for Erik Nigon, for whom this was his first singlehanded IMOCA race, he’s happy to have been able to trial the boat and get a handle on what a race of this kind entails, particularly in the breeze, where he correctly anticipated the situation and manoeuvred in line with normal procedures.

A very successful Seconde edition, gathering 76 boat in total and who pleased the IMOCA skipper as they both enjoyed the race and achieve their goals !

Next meet: the Trophée Azimut on 23 September in Lorient

The fleet of IMOCAs present in Normandy have since set a course for Brittany, save for Manu Cousin who is staying behind for a few extra days to carry out some PR operations for his sponsor. The next IMOCA event will take place in Lorient on 23 September 2018 and this will be an important final test match prior to the Route du Rhum, Destination Guadeloupe.