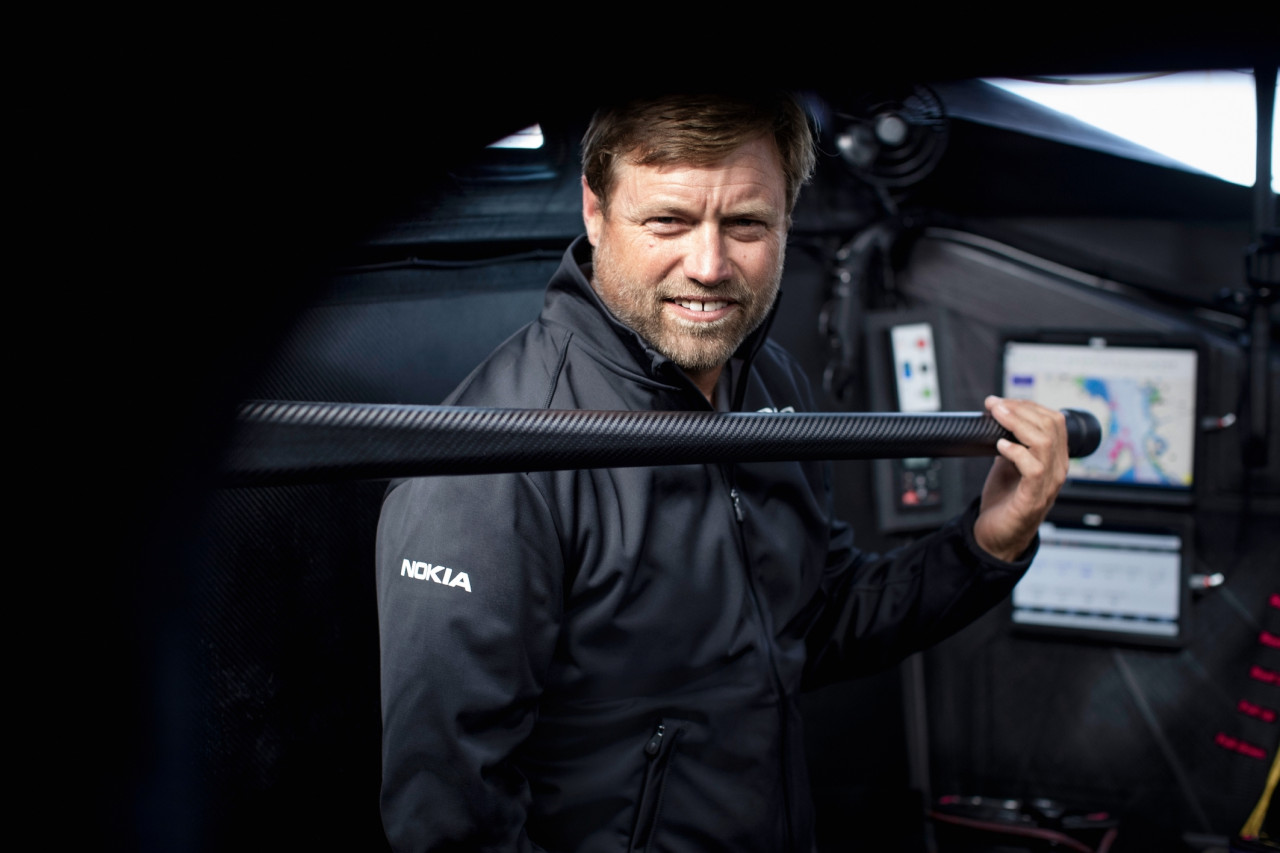 Alex Thomson is on the shortlist of almost everyone’s favourites for the Vendée Globe and while his rivals were battling it out in the Vendée-Arctique-Les Sables d’Olonne Race, he was out in the Atlantic completing a 2,000-mile qualification sail in his VPLP-designed flyer.

He came back to the dock happy with the way the boat sailed on its first big offshore venture since losing its keel after a collision during last year’s Transat Jacques Vabre. “She was going good,” summarised 46-year-old Thomson who has finished third and second in the last two Vendée Globes.

“We had some questions from the last period of sailing we did – that was obviously the Jacques Vabre – and so we had a little mission to go and find out some stuff,” he explained somewhat enigmatically. “And we found out some good stuff and then put a plan of action in place.”

The boat is now back in the shed for what the team describes as “her final service and some structural reinforcement”and will be re-launched with her new V2 foils – a refinement of the V1s with the same shape, design and fitting the same bearings – ready go sailing at the end of August.

Reflecting on the qualifying sail, Thomson said the enclosed cockpit has been a big step forward. “The most important part was that it works as we designed it,” he explained. “It’s quite simple really – you want to be in a place where you are fully protected, where your senses aren’t dulled, so you have everything you need to be able to manage the boat – like you would have done if you were outside – and everything is nice and close. I can pretty much go to sleep with my feet on the grinder and I can navigate from there, so my area of movement is tiny.”

Thomson’s design and engineering team have done extensive work to understand the forces that caused his keel to fail in mid-Atlantic last November. This occurred after a massive deceleration following what he believes was a collision with a whale, with the impact centered at the top of the keel. The keel structure has now been significantly beefed up to cope with a collision of that nature and Thomson has no concerns about the extra weight that has been added.

“It has cost us about 60 kilos in weight in the keel structure in additional reinforcement, but we feel that’s how it should be,” he said. The boat has also been fitted with a “whale pinger” in the keel bulb, supplied by Future Oceans. Thomson believes this will reduce the chances of hitting another one, something he wants to avoid for both the sake of the whales and his boat.

The British skipper, who retired in the closing stages of the 2018 Route du Rhum after dominating the race until that point, is quite open about why he did not take part in the Vendée-Arctique. He said the team simply was not ready to race and a solo qualifying sail was the best way for him to use the time. He followed the Vendée-Arctique Race carefully but he feels it is going to have little bearing on the Vendée Globe itself.

“The Vendée Globe isn’t like that,”he said. “The Vendée-Arctique flattered everyone to a degree by having lots of stop-starts. Generally the boats will slowly get away from each other in the Vendée Globe and go into a stretched out peloton-type thing,”he added.

But having watched the Vendée-Arctique from afar, Thomson has no doubt who the top skippers are going to be on the round-the-world course. “Some boats are faster in some circumstances and some seemed to be in others,”he said. “LinkedOut (Thomas Ruyant) seems to be a weapon going close to the wind but doesn’t seem to be as good downwind. Charal (Jérémie Beyou) seems to be a bit more rounded and seems to just eek out a little bit more than everybody else at some points, or at the important bits. And obviously Apivia (Charlie Dalin) is right in there."

“I think these three are clearly the favourites,”he added. “It’s hard to see how many of the other new boats really get much of a look in, simply because they haven’t done the miles.”

In the next few months, Thomson will continue to plough his own furrow and will not be taking part in Le Défi Azimut or the scheduled IMOCA training sessions at Port-la-Forêt. Thomson believes the best use of his time is to continue his own preparation, just as he did in the build-up to the last Vendée Globe. He said he feels more confident than last time about being apart from the rest of the fleet and not knowing exactly how his boat will fit into the running order.

“The only time we have ever lined up was in the Channel at the start of the Jacques Vabre for six hours and we were rocket fast,”he said. “We don’t really know where we are and they don’t really know where we are,”he said of his rivals. “But we haven’t tried to stay on the outside at all. People might think that, and I understand why they might think that. We would love to have competed in the Vendée-Arctique if we were ready but we just simply weren’t ready.”

Thomson has been aiming at Vendée Globe glory for a long time. He says his motivation to win is just as it ever was, but he is approaching this year’s race concentrating on trying to make sure he completes the course in the expectation that if he does, he will be at or near the front of the fleet.

He is feeling confident because the team has been operating at a high level for some years now. “We started with this boat where we left off last time and we weren’t in bad shape last time,”he said. “All anyone ever wants to talk about is the race – that’s all they ever want to talk about, but the reality is the race is finished before you start.”

Up ahead is more sailing after the boat comes out of the shed. “Hopefully we’ll get some reasonable miles in offshore before we head in – that’s fairly critical for us I think,”explained Thomson. “Everybody is in a position where they haven’t got the miles really – we got hurt by that. I kind of feel like we are back to where we were in 2016 with our team, having the capsize in the build-up, but the difference this time is everyone else is our position too.”

Thanks Alex and we wish you all the very best for the rest of your build-up to the Vendée Globe and for the race itself.