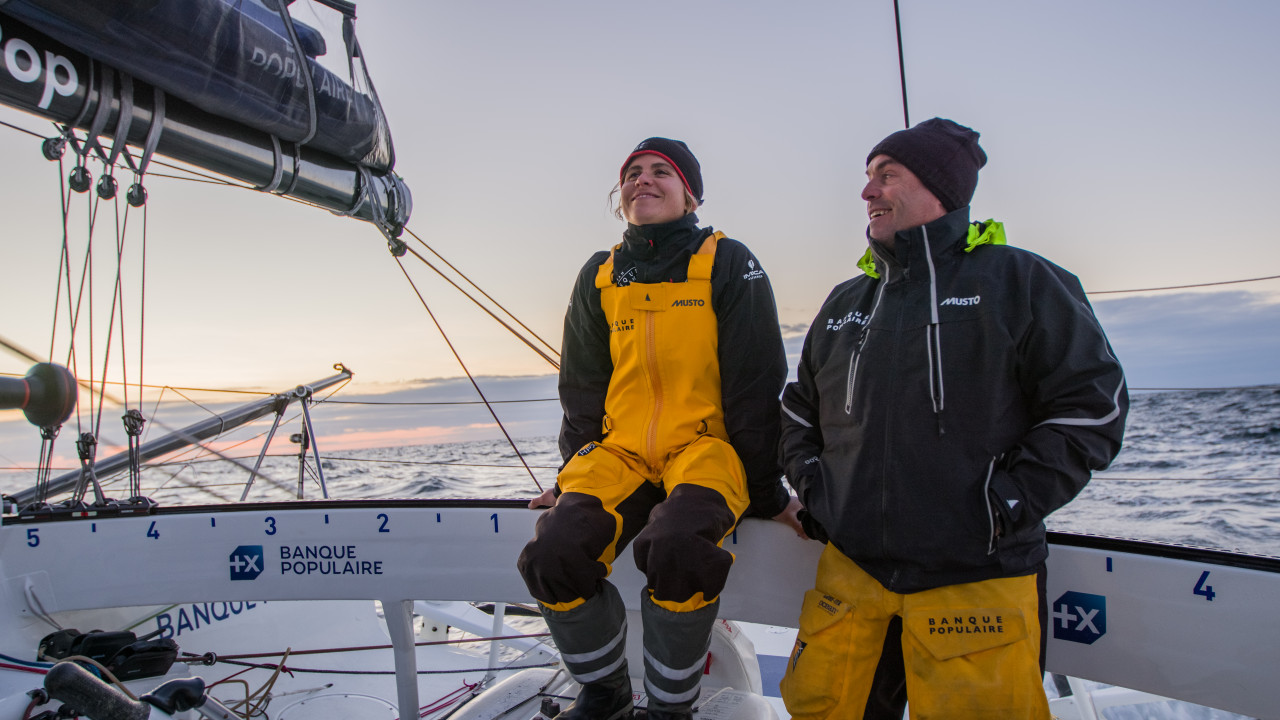 The first boats are now crossing the International Date Line, the imaginary line at a longitude of 180 degrees, which marks the start of the voyage back towards Les Sables d’Olonne. The 27 IMOCAs still in the race are continuing to battle it out at various levels, but all with the same goal of crossing the finishing line.

The result they have so far accomplished in this Vendée Globe is largely down to their own efforts, but also to their remarkable teams back on dry land. All of the vital features ensuring the success and development of their project reveal the team aspect of solo racing. At the head of these teams, there is often one single person, a leader capable of combining race performance with technical management and relations with partners.

“I am the control tower.”

The background and the precise role of team managers vary according to the teams, their size, budget and organisation. Among the dozen tasks they carry out, one is shared by everyone – they are the business leader entering into contact with “the rest of the world.” Anne Combier, project leader for thirty years, is the link between Yannick Bestaven and the Race Directors, the technical team, the press officer, doctor and sponsor. According to her, the team manager is rather like a control tower. “The team manager is the right-hand man for the skipper, but here, we have several right-hand men. Firstly, there is Jean-Marie Dauris, who is the technical and sporting director, Stanislas Delbarre the boat captain, Antoine Connan the engineer, who is available around the clock, Caroline Muller who takes care of communications, etc. My role at the start was to be the managing director of the project taking care of of everything to do with the business, whether that involved the finances, accounts, the relationship with sponsors, the preparation of the finish, the administrative work, etc. I can do lots of things, but I have a lot of experts around me. I approve a lot of details. That may concern the purchase of a sail or an article for communication purposes, and I think that all the team managers who have been doing this work for years also carry out these responsibilities, but I do not know whether the same is true when we look at newer teams.”

Benjamin Dutreux, considered to be an outsider in the Vendée Globe, has one of the newer projects and his organisation is rather different. With a boat from 2007 that he refers to as Grandpa and with a limited budget, the OMIA - Water Family team runs this project like a family. On the one hand, there is the technical side managed by Thomas Cardrin and on the other, “all the rest” managed by Benjamin’s best friend from school, Alice Potiron. “My role involves a lot to do with the technical aspects and logistics around the boat. I coordinate the members of the technical team. We are not a big team with for example during the winter refit, three of us and a few extras helping us to prepare for the Vendée Globe, including friends and trainees who came along to help us. My role throughout was to ensure that everyone had something to do and that the work was done well. Alice takes care of all the rest,” explained the boat captain. As for Alice Potiron, she takes care of the overall coordination of the project. “Setting up a project is rather special. I have to ensure that everything falls smoothly into place with our financial partners and the Water Family charity that we have supported since 2017-18 and for whom I also manage the Vendée branch. I also manage all the other partners that support us, communications, logistics and lots of other key elements required to ensure the team works well.” However, the skipper from the Island of Yeu is never far away. “Benjamin is in overall charge of the project. He set it up and has taken on all the different facets of the job of a team manager as he coordinates everything.”

Under pressure at every level

For the sailors, racing means pressure. It is also like that for the team managers. The only people able to understand the constraints imposed by the boat and the demands of those ashore, they have to juggle with everything to satisfy requests as best they can. Finishing the race, avoiding damage, helping with daily repairs, and even winning… all of these factors imply a certain pressure depending on the goals at the start. Ronan Lucas, Head of the Banque Populaire team was already present in 2016 alongside Armel Le Cléac’h. After a winning project four years ago, the goal for the 2020 Vendée Globe was very different. The pressure is therefore not the same. “I don’t mean we don’t feel any pressure, as there is the pressure to finish and that is very important, but the cards have not been in our hands since the start from Les Sables d’Olonne. We did what we could to prepare the boat and Clarisse. But wanting to complete the Vendée Globe is not the same thing as wanting to win it. If you are aiming to win, the pressure on the skipper and on his team is permanent, as with each mile the frontrunner loses, we worry and wonder what has been happening on board and if there has been a problem. We tend to imagine the worst scenario. This year it’s different. Clarisse has had very little damage since the start. Of course, as soon as she has a small problem, we fear that it might be more serious, but we don’t feel the same pressure as when you are not allowed to lose the slightest mile.”

Psychological help throughout the race

Alone for more than forty days, the sailors have become increasingly tired as the days go by and with all the manoeuvres they have had to carry out. They are no longer able to feel any positive energy. To help them through this, they can count on their teams. Available 24 hours a day and 7 days a week, they are on stand-by to reassure the sailors, who sometimes are unable to keep a clear head when faced with tricky circumstances, as we saw during the search and rescue of Kevin Escoffier on 30th November. In fact, the team managers for the boats sent to help during that night were just as much in contact and just as stressed as the sailors on their boats. The event really shook the skippers at sea. “The event which shook us the most during the race was Kevin’s rescue. We all felt a lot of stress until Jean picked him up. After that our role was to “rebuild” Yannick, as he was completely overwhelmed and shaken. It took him 24 hours to get over it. He regained his trust in the boat too, as a boat sinking leaves its mark,” explained Anne Combier.

The team managers are also the link between the boat and dry land. Depending on the character of the skipper, they need to adapt. Some enjoy being alone and do not need to communicate with their team, unless there is an emergency or a problem, while others, like Benjamin Dutreux on the contrary enjoy getting news from ashore. “I think we talk to him at least five times a day. He is not really someone who is a solitary figure. When racing that is fine, but if there was no race, it would be more complicated. He needs to remain in contact with dry land to know how everyone in the team is and if the partners are happy. We tend to leave him alone in his race, but it does him good and we don’t want to hide anything from him. He is a business manager, so is stubborn and determined,” added Alice Potiron and Thomas Cardrin. From small teams with just three people to bigger teams with fifteen, the link to people ashore is a key element ensuring the well-being of the skipper and contributing to his performance.