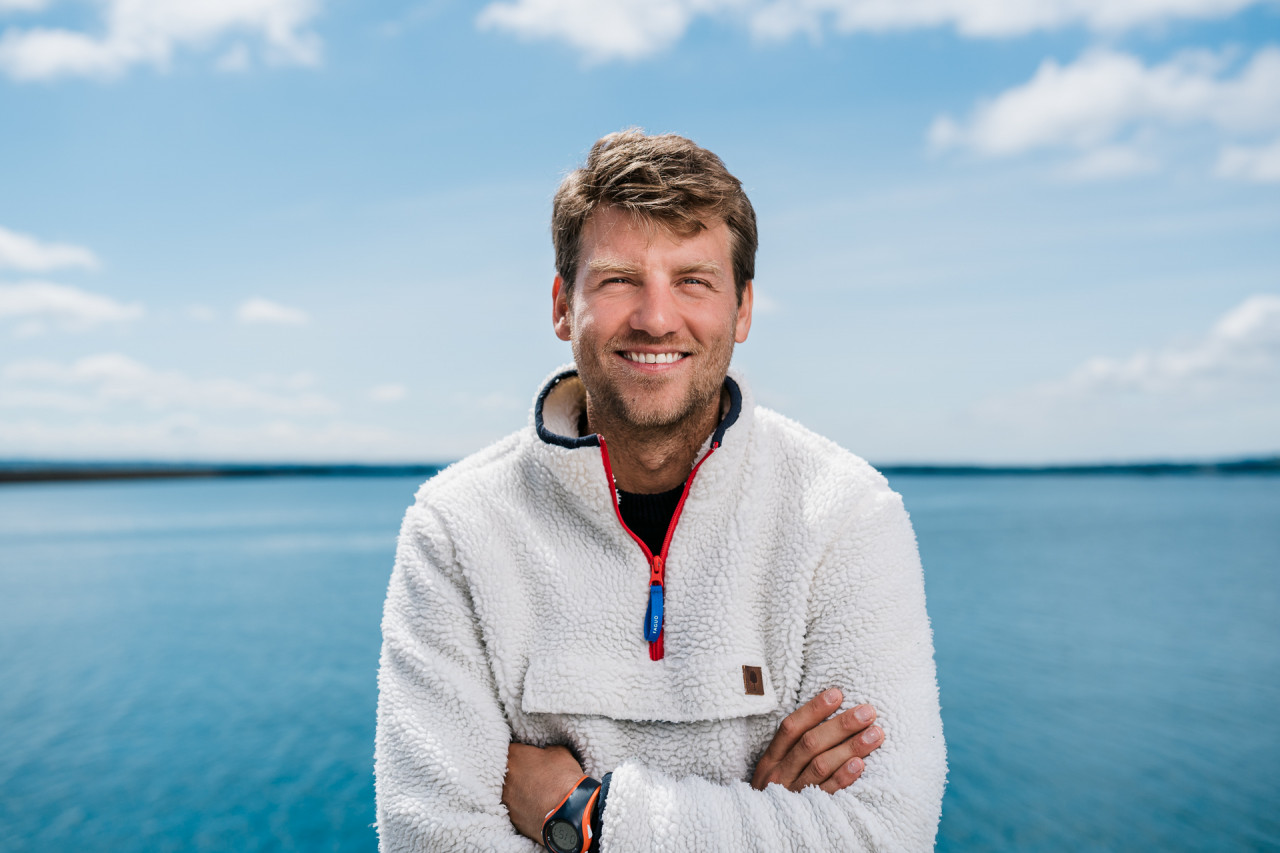 It’s easy to see why the international construction services company, Monnoyeur, decided to partner with the relatively unknown former Mini sailor Benjamin Ferré, and help him in his Vendée Globe campaign for 2024.

The 31-year-old, originally from St Malo, is bursting with enthusiasm and passion for his new sport – he only started sailing six years ago – and he has a great way of sharing his love for the sea and his new boat.

As he put it succinctly, after we returned to the dock at La Base marina in Lorient after the speed runs in the Défi Azimut-Lorient Agglomération: “I am the happiest guy in the world being able to navigate with this boat.”

But Ferré is not just a dreamer; he is also a sailor with real potential and with a great future in the Class. He came third in the 2019 Mini-Transat, having already completed a previous transatlantic voyage using only a sextant for navigation. Then he burst onto the IMOCA scene finishing fourth in his first race, the Vendée Arctique.

It was a superb performance in an old VPLP-Verdier daggerboard boat that won the 2012/13 Vendée Globe in the hands of François Gabart, before enjoying an eventful life as SMA with Paul Meilhat, and finally completing the Vendée Globe again in the colours of Banque Populaire in 2020/21 with Clarisse Crémer.

Ferré was delighted with his performance in that race, when he and fellow newcomer to the Class, Guirec Soudee (on Freelance.com), went their own way in the early stages. For his part, Ferré was demonstrating his preparedness to do his own thing, something he had already shown in the Minis.

“For sure I was surprised because my first objective was to finish,” said Ferré, talking in the cockpit of Monnoyeur-Duo for a Job, arguably the most competitive of the daggerboard division in today’s IMOCA ranks. “When you spend 72 hours leading the race ahead of some very big names, it was just unbelievable. But the great thing for me was that, over the year leading up to that race, so many people had trusted me and it was a way for me to thank them…so I was glad, not for the result, not so much for me, but for them.”

A key feature of Ferré’s emergence on the IMOCA scene is his close friendship with the legend that is Jean le Cam. Ferré and Le Cam have a mentor-student relationship and Ferré says he regards Le Cam and his wife Anne as like a second set of parents. He has spent weeks living with them and he loves to make the point that the younger generation of sailors can learn an enormous amount from more experienced older navigators like Le Cam.

“I am 31 – Jean is 62 – exactly double my age,” explained Ferré. “I really think that for our generation, most of the time we are used to saying the older generation made mistakes and we are going to do better. But I think to do better you need to get the experience of the older generation and that’s what I try to do with Jean. It’s amazing because it’s really a story of transition and learning because I learn from him, but I hope he learns from me also, with my enthusiasm and my own way of thinking.”

After his eye-catching debut in the Articque, it was Le Cam who reminded his protégé that fourth place in a relatively short race was all very well – the big goal remains the Vendée Globe and that continues to be Ferré’s focus. The Route du Rhum-Destination Guadeloupe will be his fourth race in an IMOCA and his goal will be to finish it and to learn more about his boat in the process, with the Vendée Globe always in the back of his mind.

“There are so many things that I need to improve – sailing the boat, physical preparation, mental preparation, sleeping, meteo – and at the end there is a performance,” explains Ferré. “I say I really know the boat when everything is OK, but I really don’t know it when something goes wrong. I am still at the beginning – I still have two years to learn about the boat, but two years is tomorrow! I am at the beginning, but I try to learn fast.”

In Monnoyeur, Ferré seems to have found the perfect sponsor, a powerful multi-national company that is happy to let him be himself as a sailor and as an individual keen to share his journey in a natural and uninhibited way. And they are ready for what could be a rough ride in a sporting discipline when setbacks can be soul-destroying.

“When they signed me they told me, for sure, you are going to have some good races and we will be there for those. But, for sure – and maybe you are too young to know this – you are going to have some bad ones, but we will also be there for those too. For me it’s crazy to have a sponsor like this – I think nobody can dream of better than this,” he said.

Ferré is also proud to be representing his second partner, the charity Duo for a Job. This links immigrants with mentors with the aim of helping them to find work, an important contribution that fits well with Ferré’s socially responsible outlook.

Coming into the IMOCA class is a daunting challenge for any young skipper – whether they finish in the top-five in their first race or not. But Ferré is keen to point out that some of the top names in the Class have been welcoming and helpful to the young newcomer, who has benefitted from some training sessions alongside the likes of Charlie Dalin and Thomas Ruyant.

“I was surprised because, for me, I did nothing before arriving in IMOCA,” he said. “But they are all really nice to me and that’s really cool. They see a new face and a young one and they know there is no real competition between our boats, but still I was surprised how nice they are and that we are able to discuss things and talk.”

While Ferré exudes charm and is clearly at ease hosting guests aboard his boat, he remains a natural single-hander and says he likes nothing more than to be on the ocean on his own. “When I am on a boat, I enjoy being on my own and not communicating with anyone else,” he said. “Just to be on the sea is what I loved at the beginning – not really the racing, but just to be solo on a sailing boat and on this kind of boat, it is just amazing for me.”

For the skipper who now divides his time between Paris, Port-la-Forêt and Lorient, the goal in the Défi Azimut 48 Hours solo will be just to complete the course. Then his focus will switch to the Route du Rhum – his third solo transatlantic and his first in an IMOCA.

“It’s the biggest race of the year and it’s a way of preparing for the Vendée Globe. So I don’t really care about my position – I just want to do my best,” he said.