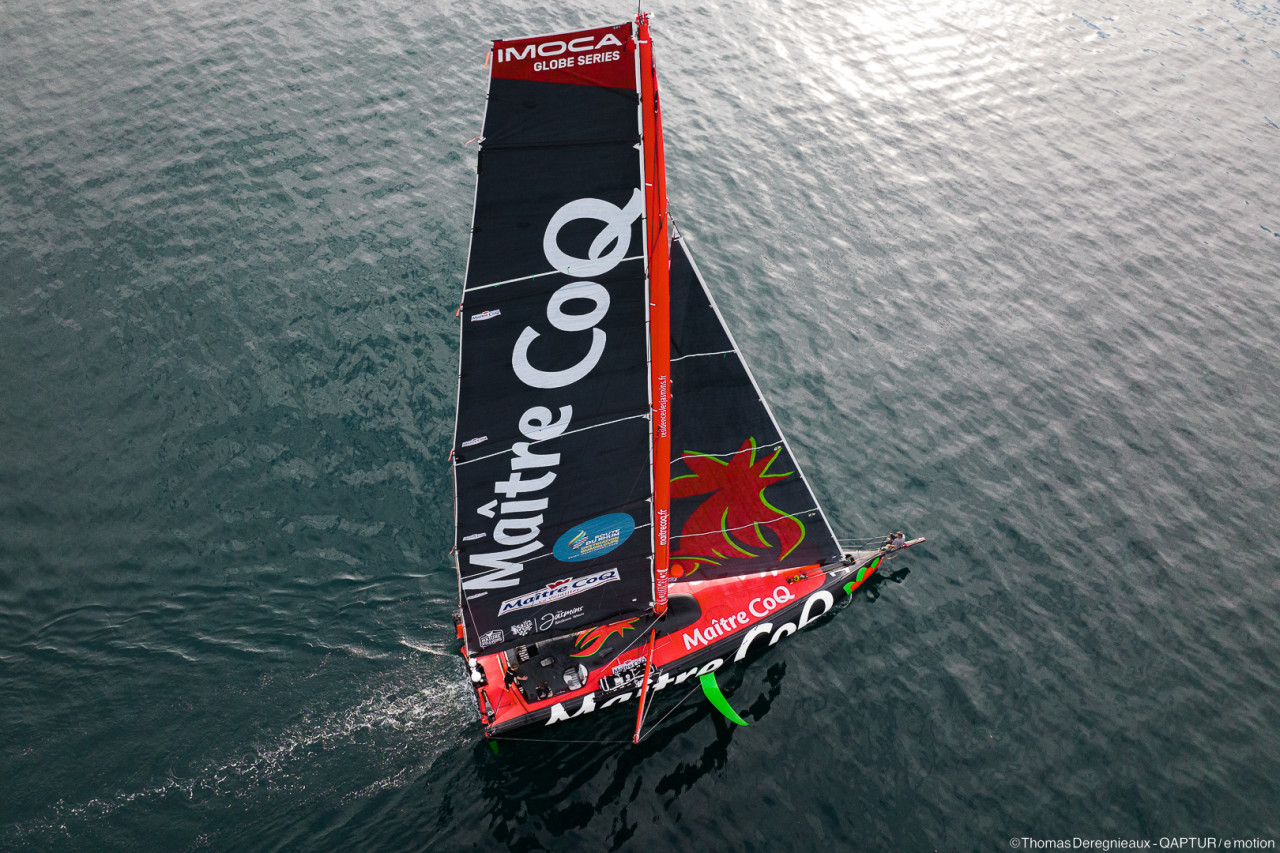 One of the best examples is Yannick Bestaven. He took over the Maître CoQ sponsorship from Jérémie Beyou prior to the last Vendée Globe, and has now forged a strong partnership with the company, which has produced his first new ocean racing machine since his successful stint in Class 40s.

The new Guillaume Verdier-designed Maître CoQ V is based on the molds of 11th Hour Racing Team-Mālama. It emerged from its build shed at CDK Technologies in Port La Forêt a bit later than Bestaven may have planned, but it is going to give the 2020/21 Vendée Globe winner a potent platform to defend his title.

Speaking to the IMOCA Class, Bestaven, 49 who is based in La Rochelle, paid tribute to his sponsor, the French poultry foods producer that is taking part in the Vendée Globe for the fourth time in 2024.

“Maître CoQ is really committed to sailing,”said Bestaven, who showed superb consistency of performance in the deep south during his first full Vendée Globe on board the 2015 VPLP-Verdier designed Maître CoQ IV. “They also support the Figaro class with the Solo Maître CoQ and they’ve been an IMOCA partner for a long time.”

An engineer by training and a successful entrepreneur and businessman whose company, Watt & Sea, has developed hydro-generators that are fitted to many IMOCA yachts, Bestaven says the sponsorship is based on far more than just financial backing.

“What I like about this company is the values they carry,” he said. “It’s a family company. I feel at home here. It’s the first time I’ve had a partner with so many employees who follow me when I’m at sea, so that motivates me too. There is a real internal programme to bring the project to life, both internally and externally. It’s an interesting culture.”

Bestaven did not set sail on the last Vendée Globe as one of the favourites for overall victory. But his tenacious performance – that saw him establish a good lead after Cape Horn only to lose it and recover – produced the first victory on corrected time after the closest finish in the history of the race.

Straight-talking, unpretentious and modest, winning the greatest solo race of them all has not changed Bestaven. Nor has it dimmed his passion for sailing that has sustained him through a career lasting more than 20 yeas that has featured wins in both the Mini and Class 40 divisions.

You might think that having won the Vendée Globe, Bestaven could struggle to get himself back on the global racecourse, but not a bit of it. “No, it wasn’t difficult to motivate myself,” he said when asked about his desire to do it all over again. “I immediately wanted to go back. It’s not an easy race and you have to prepare for a long time in advance. The motivation is up to each individual and I think my motivation is in the sailing.”

He is absolutely clear that the key objective for the new boat – which features modifications to its rudder and the latest foil thinking from Guillaume Verdier – is the 2024 Vendée Globe, when he will be attempting to defend his title against the likes of Charlie Dalin, Kevin Escoffier, Paul Meilhat, Thomas Ruyant, Louis Burton and Beyou (amongst others).

But in the immediate term, the focus is on the steep learning curve with the new boat and the short preparation time for the Route du Rhum Destination Guadeloupe, as Bestaven and his team try to qualify and be ready for the solo transatlantic classic that starts from St Malo in early November. Bestaven will not be taking part at the Défi Azimut-Lorient Agglomération because he plans to be at sea doing his Route du Rhum qualification.

He says his participation in the Route du Rhum will not be about trying to win but simply completing the course. “We will go step by step, with the level of preparation we have – little by little,” he said. “The main thing this year will be to get to Guadeloupe, more than to perform initially and then, above all, to prepare well for the solo round the world race in 2024.”

As far as the technical side of his new boat design is concerned, Bestaven gave little away. “We’ve been working mainly on sailing this boat, that was designed for a crew by 11th Hour Racing Team, in single-handed (configuration),”he said. “I have changed some architectural things that allow me to sail better on my own. Otherwise, there are a lots of things in common with 11th Hour Racing Team-Mālama, which is a pretty good boat.”

The Vendée Globe champion is older than some of his main rivals, but he does not feel that age is becoming any sort of barrier to his continued participation at the highest level in solo ocean racing. He cites the career of round the world record holder Francis Joyon as an inspiration and example to follow in this respect.

“When I see someone like Francis Joyon, I tell myself that I am still young and that I still have time to do lots of things!” he said.