Boris Herrmann: “This time we are not in it to win it.” 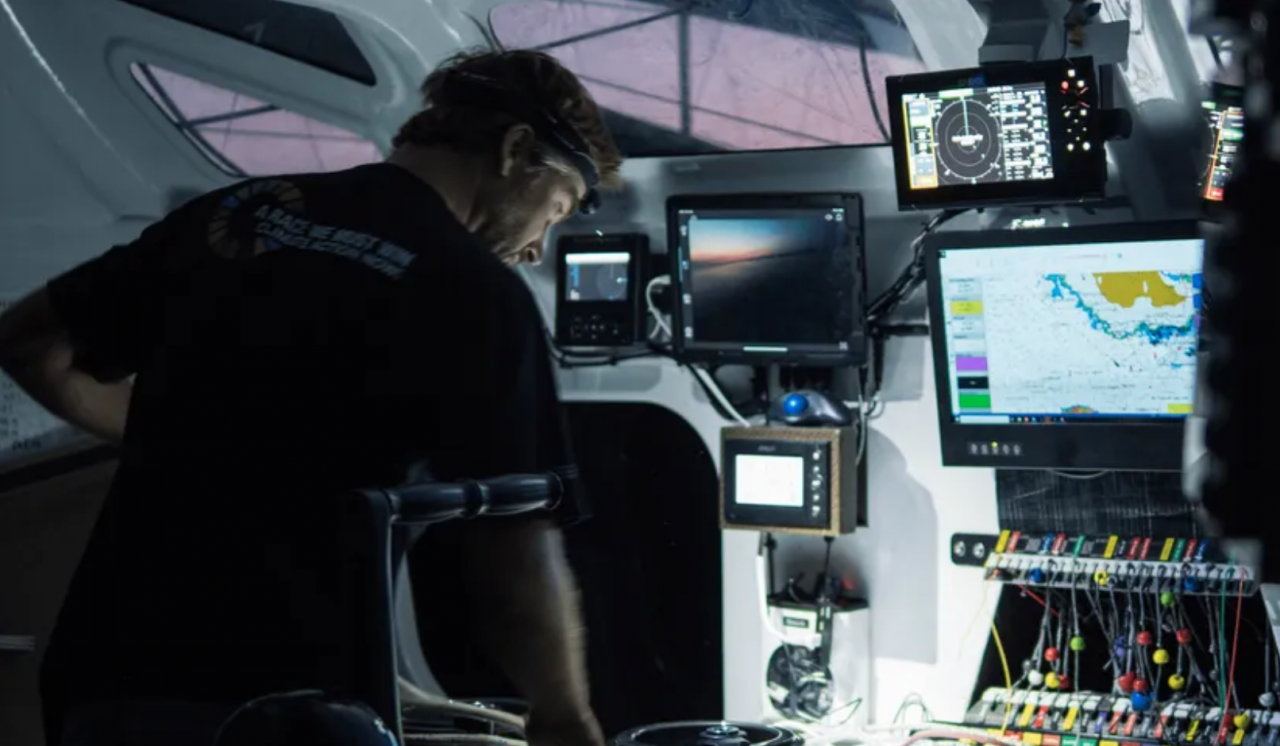 For Boris Herrmann, the popular 41 year old German solo ocean racer who took fifth on the last Vendée Globe, managing the expectations of the hundreds of thousands of fans he has at home now, and a big media following, is all part and parcel of this, his second Route du Rhum-Destination Guadeloupe.

Herrmann left at the start of his Vendée Globe with a hard core following but very quickly his storytelling and his performance became national news. Towards the end if his race he was on all the major news and sports channels and was greeted as a hero on his return. His book telling the story of his race was at the top if bestseller lists for weeks.

Now with a brand new VPLP designed Malizia-Seaexplorer just launched mid -July there could easily be a belief shared among the legions of new found ocean racing fans that the new boat should be the perfect passport to a podium finish straight off the bat.

“In my progression curve four years ago here I had already done two years racing with the boat, two Transatlantics, then I was at 90 per cent. Now I am at 40 per cent. So, people ask me what my expectations are and I explain that ‘yes I am in a race, yes I want to compere as best as possible but I am not going to be competitive, I don’t know the boat well enough, I am not really in race mode.” Cautions Herrmann. “But that is great. It comes down to is the beauty of this sport. This is a true adventure, I go out there and have no idea about my boat. I mean…. ‘what the hell!’ what are we all doing? None of us have really have sailed our new boats in 40kts. We don’t know what will happen, what will break, who will do what.”

For those with proven, fast boats who are doing their last races with them before their new IMOCAs are launched for next season they have a big advantage according to Herrmann, “That is different from all the others like Charlie Dalin and Thomas Ruyant who have had their boats in 50kts, racing round the world. They can be in full race mode and they are going to win it. We are not in it to win it, we will be doing the best that we can of course. But the media don’t understand that, they say ‘but if you can’t win it you will be frustrated. Thomas Ruyant and Charlie have the pressure of being favourites and if they don’t win they will be disappointed. For me there is an emotional upside. I have no pressure, I am not a favourite. If I get to the other side it will be a great victory for me and the team. And then on top of that if we are better than, say, 15th I am happy with it and I take it. The only thing on the side is my old boat, I want to be ahead of it.”
And while he is still learning his boat he knows that long term he wants to be able to push longer and harder than the last race when his sheer consistency and regularity kept him near the front.

“ In the Vendée Globe the course of history was to my favour.”He points out , “ But in four years it might be the opposite, it might be the sort of weather when it is a rich get richer race and you never come back. And on this Route du Rhum race, a middle distance race it is pedal to the metal, it is flat out, no looking back. If you are 50 miles behind on the first night it is very rare that you do anything good, that you can come back.”
His is one of five IMOCA teams who have to arrive in Guadeloupe and turn round fast to sail back to Alicante to prepare for The Ocean Race which starts on 15th January 2022.

“Yes it is a tight schedule that determines that we are not in full race mode like we were here four years ago.”He acknowledges. “Right now we have had a bit too many technical problems to be fully confident, I have to confess. But the boat really is impressing me a lot, but it is rough on me to sail fast, a step up from the last boat, but it is quite demanding on you, the motion, the noise, the sensation and it is a big adventure. And, hey, still these boats are crazy. It is exciting. And what we have is a boat which is not going to break. I would bet anything that this hull and structure is bulletproof. I am very confident in it. The other systems and stuff we will have to learn to make to reliable over time. “

Herrmann makes the point he is preparing long term and is in no hurry, “For me this sport is so complex. And for me since February last year it is a race to the Vendée Globe 2024. And in this long term cycle I still wont start at the same level as Charlie Dalin for example. I am still not at the top of the game and that, for me, might only be in 2028. This is a very long term thing. And for me my family is important and so am I myself, I need to have time to regenerate after the Vendée Globe, to be motivated, to be well focussed, to have the partners behind me and be feeling ready to go in the sense that there is not too much burned earth behind me. I am happy with my wife, my kid is at home I spent some time at home which is important emotionally to stay powerful and focused for a longer time.”

And being a big celebrity in Germany? “It has given a great boost to sailing in Germany and it is lovely to see so many people passionate and following it in Germany but I am not a big celebrity. The funny thing was German tourists coming to Lorient to see Malizia, wanting photos and autographs, every day German tourists in Lorient to see the boat. It is really amazing and we had a few thousand people at the boat launch in Hamburg. And credit to our team for really sharing our story and all that gives me energy it does not add pressure. That is the great that is can catch the imagination. We need to remind that this is always an adventure. We need to speak honestly about it. I feel like many other competitors don’t really speak openly about it, it is a race. We don’t know what they are doing”

He is very happy with the new boat, it is delivering everything he asked for.

Herrmann concludes, “This is a very good boat for the Vendée Globe, it is very good for the overall campaign. I don’t foresee broken stringers or a delamination after a cold front. We have a monolithic very strong hull, a little heavier but when we are up on the foils we perform very much like the pack. We are seeing sensational performances downwind and upwind, a few knots quicker than the old boat, the ergonomics are so much better than the old boat. There are so many good things about this boat.”

Compared with the other six new boats on show in Saint Malo right now, Herrmann’s has a distinctive high volume coach roof aft. The common supposition the added space is for the crewed The Ocean Race. He says, “The aft ‘cabin’ is for the class rule, it is not specific to The Ocean Race, it is something I was thinking about on the old boat lacking volume on the topsides for the capsize test. Normally it is a dead space and in this case it helps the aerodynamics, it creates an endplate. And for the mind it is good, I have a feeling of space, I have light, I have a ceiling, I love it. I can be in different places. I am so looking forwards to the Vendée Globe it will be a different life.”