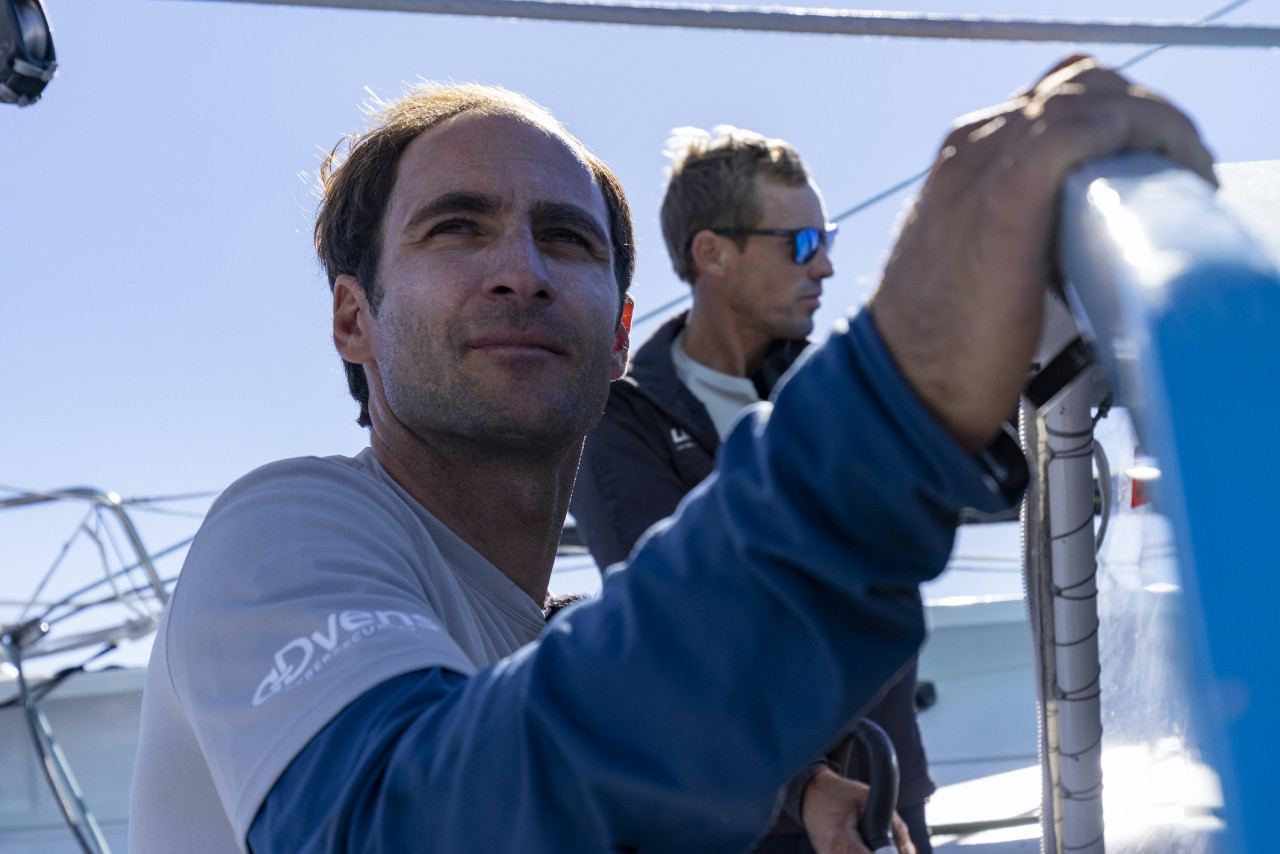 New foils, a new spinnaker, a new J2 and a re-vamped ballast system are just some of the ways that the team at LinkedOut have optimised their IMOCA flying machine for this Transat Jacques Vabre.

After an intensive training schedule in the build-up, the team is full of confidence going into the race and the word on the dockside in Le Havre is that the combination on board of Thomas Ruyant and Morgan Lagravière is proving a real strength.

That’s just as well as they take on the likes of in-form Charlie Dalin and Paul Meilhat on APIVIA and Jérémie Beyou and Christopher Pratt on Charal at the front of the IMOCA fleet on the 5,800-mile racetrack to Martinique.

Lagravière, 34 who hails from the Indian Ocean island of Réunion, told the Class that he and Ruyant compliment each other well, with the former focusing on strategy while Lagravière zeroes in on sailing performance.

“For sure I’d love to win,”said Lagravière for whom this will be his fourth start in a race that he finished in third place alongside Eric Peron on Des Voiles et Vous! in 2017. “Thomas and I have exactly the same point of view, the same frame of mind and that’s the reason why we are so strong together.”

The former skipper of SAFRAN knows that there are many elements that have to be right to win, having had to retire twice from the Transat Jacques Vabre, once with structural problems and once after hitting a rock. “There are many keys to success in this race,”he said. “You have to be fast all the race; you have to be together with your crew all of the race and you must not break your boat – that is the most important thing. I’m not sure what the main point is,” he adds laughing, “but we have to do what we’ve trained to do.”

During training at Port-la-Forêt with APIVIA, the LinkedOut team has seen Dalin and Meilhat go quicker upwind in medium conditions, but their own boat has shown real pace reaching and the team hope it will be a match for Apivia going downwind VMG.

With world class 420 and 49er campaigns under his belt, a strong record in the Figaro and a current passion for kite foiling, Lagravière has brought a fresh approach to his first foiling IMOCA campaign, to the extent that the LinkedOut team believe they are real contenders for the podium in Fort de France at the very least.

Lagravière himself says he and Ruyant have always been competitive in training but there is still more to come. “All the time we have been competitive against the other boats – our boat is really strong and with Thomas it feels like a good partnership. But compared to Apivia and the other top teams, we are still improving – at each training session we have improved together and improved the performance of the boat,” he said.

Asked who they need to beat to get into the coveted top-three, Lagravière, mentions Apivia and Charal but also Corum L’Epargne (Nicolas Troussel and Sébastien Josse) with its new foil package and Arkéa Paprec (Sébastien Simon and Yann Elies). “Maybe Bureau Vallée (Louis Burton and Davy Beaudart) with the old L’Occitane boat,”he said. “There are many, many boats that can do well in this format.”

The charming Frenchman who now lives near Lorient is a busy man. Once this Transat Jacques Vabre is over he will be back in France ready to re-join Charles Caudrelier and Franck Cammas as a helmsman on board the Maxi Edmond de Rothschild with the Gitana Team, as that team prepares for another crack at the Jules Verne Trophy in January.

Gentoo Sailing Team Skipper James Harayda had a solid first solo race in Lorient at the 48HR Défi Azimut. James finished a creditable 19th in a highly competitive fleet containing many of the best solo sailors in the wo…