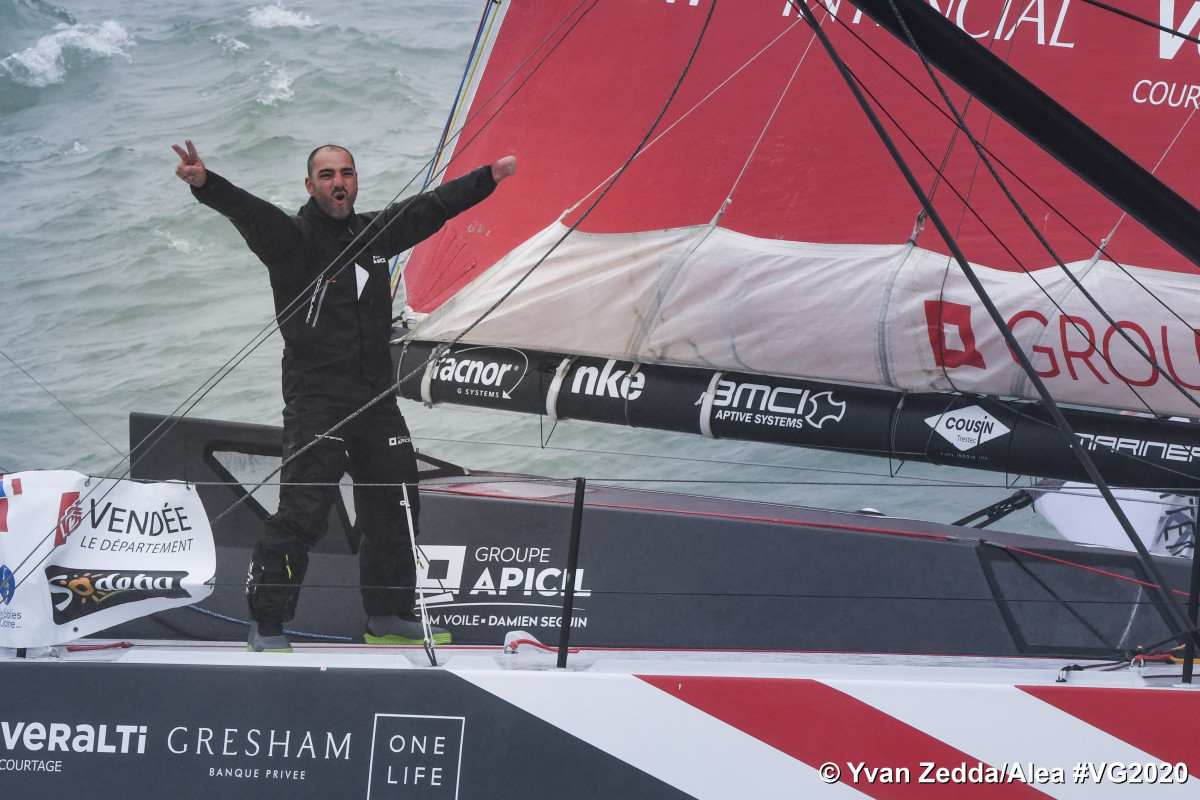 Damien Seguin crossed the finish line at 11:18:20hrs UTC today, in a south-westerly breeze of 20 knots to become the sixth skipper to arrive at Les Sables d’Olonne. His race time is 80d 21h 58min 20s. His delta to winner Yannick Bestaven is 18h 13min 34s

On his 2008 Finot-Conq design which was formerly Comme Une Seul Homme, Seguin is the first skipper to finish on a non-foiling, daggerboard IMOCA.

His has been one of the stand-out performances of this Vendée Globe. However, Seguin now has to wait for his final position in the rankings to be decided. This will depend on exactly when Jean Le Cam finishes, given the 16 hour 15 minute bonus he was awarded by the International Jury to compensate for time lost during his dramatic rescue of Kevin Escoffier at the end of November.

Despite being a newcomer to racing IMOCAs, and a Vendée Globe rookie, Seguin put in a powerful performance right from the start. The double Paralympic 2.4mR gold medallist, and winner of the 2016 Tour Voile, has achieved a remarkable race. He showed his mettle from the very start, performing at a level above that of many more experienced competitors with newer boats.

After less than 24 hours at sea, Seguin climbed into third place, before taking the lead from Jean Le Cam at noon on the second day. Later in the race he was fourth around Cape Horn, less than 400 miles behind the eventual winner, Yannick Bestaven, and well ahead of most of the newer and more powerful foiling boats. He even moved up to second place for a time on the South Atlantic return leg.

Strategy is often just as important as speed for success in this race and a telling statistic is that Seguin is among those who sailed the shortest overall distance.

This performance is all the more impressive given Groupe APICIL is a 13-year-old boat without foils that failed to notch up significant successes with former owners. Yet Seguin remained solidly with the peloton group.

Problems he had to overcome include a two-centimetre gash in his arm, inflicted when using a knife only 17 days after the start. Pilot issues and significant sail damage also featured large in Seguin’s race. After entering the Pacific Ocean he lost his biggest downwind sails – a significant blow, especially for a non-foiling boat. Yet this was not apparent from his performance on the water and we only learnt of these problems at a much later stage.

The return north up the Atlantic presents plenty of potential pitfalls, yet Seguin repeatedly negotiated these like a master. He held his fourth place for thousands of miles, before climbing almost to the lead on January 12, just 9.5 miles behind then leader Charlie Dalin. Nine days later, after another shuffle of the leading pack, Seguin was back to third on the leaderboard, barely more than 100 miles adrift from the leaders.

On paper there’s no way a first-time contender sailing an older out-classed boat ought to have been anywhere near the leading pack. That Seguin spent so long with the top competitors speaks volumes about his attitude and abilities, not to mention his potential in future Vendée Globes.

After negotiating the doldrums, despite not being able to maintain the pace of the foiling boats, he minimised losses by taking a shorter inside line around the Azores high pressure system than his foiling competitors. He then gybed north towards the strong south-westerly winds of a giant Atlantic low, still barely more than 300 miles off the lead after 23,000 miles of racing.

Finally he nailed the layline to the finish at a distance of more than 400 miles, taking a smooth trajectory in a building breeze, while blasting towards Les Sables d’Olonne at an average speed of 17.3 knots over 24 hours. It was fast enough for Seguin to maintain his advantage on closest competitor on the water, Giancarlo Pedote’s five year old Prysmian Group.

Damien Seguin, who was born without a left hand, is unquestionably one of the great revelations of this Vendée Globe. It is no longer a question of knowing whether a sportsman or woman with disabilities can complete this toughest of all sporting endeavours, but whether he or she can one day win. Seguin is clearly a sailor to watch very closely next time.