Damien Seguin & Yoann Richomme, aiming to be the first of the non-foilers 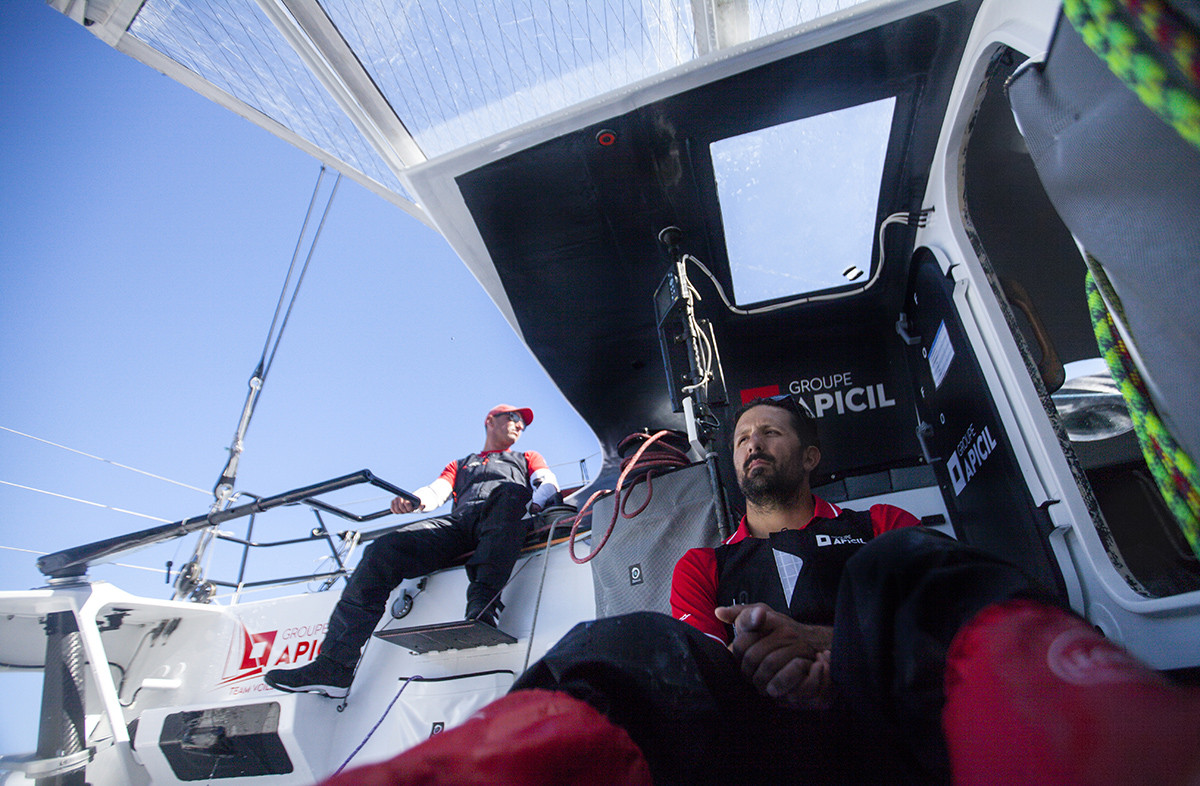 Between now and the start of the Transat Jacques Vabre, which begins in Le Havre on Sunday 27th October, the IMOCA class has decided to share with you some portraits of the unusual, unlikely and surprising pairs that have come together for the double-handed transatlantic race. To start this series, we look at a pair that has had a lot of practice.

Damien Seguin and Yoann Richomme (Groupe Apicil) will set off for their third Transat Jacques Vabre together after competing on a Class40 on two occasions (2011 and 2013). The two men who know each other very well, rightly have some high ambitions and can legitimately aim for first place in the unofficial category of IMOCAs with straight daggerboards.

Last year in the Route du Rhum, Damien Seguin took a good sixth place. For the Transat Jacques Vabre, Damien (who was the first disabled sailor to join the IMOCA class) wants to be the first non-foiler to the finish . For that reason, he has chosen a top class co-skipper with whom he works very well, Yoann Richomme.

Twice winner of the Solitaire du Figaro (2016 and 2019) and winner of the 2018 Route du Rhum in Class40, Yoann is an excellent sailor and a good friend of Damien. Together they have raced together twice in the Transat Jacques Vabre in Class40 (2nd in 2011, 7th in 2013). “On each occasion, things worked out well,” said Yoann. “That is what led me to want to set off again with Damien this year. We get on well together and we are very much at one in terms of racing, as we both always want to do our best. Like Damien, I am aiming for the 2020 Vendée Globe. This Transat Jacques Vabre is therefore good experience for me, as it will allow me to clock up the miles to qualify for the solo round the world race.”

“We complement each other well out on the water and are both capable of pushing beyond the limits never complaining about the hard work. It may hurt both of us a lot, but we remain in a good mood. There is obviously a good reason why I thought of Yoann for this race,” Damien Seguin told us. “He is a very friendly person with whom you can talk about anything and everything. That is something that isn’t easy to find and that’s why I decided to give it a go for the third time with him. We get on very well. We’re true friends, which is very important when you set sail double-handed on a boat.”

“Ending up first in the boats with daggerboards”

Damien Seguin and Yoann Richomme are both determined competitors, who share the desire to give it their all and never ease off. “Both of us arecapable of pushing that bit too hard and never complain. We put up with the pain,” confirmed Damien.

Aboard Groupe Apicil, a Finot-Conq designed boat launched in 2007, the two men know that it is going to be tough to rival the more recent IMOCAs. “Our main rivals will be the best boats with daggerboards,” explained Damien. “There’s going to be Jean Le Cam and Nicolas Troussel, Stéphane Le Diraison and François Guiffant, as well as Clarisse Crémer and Armel Le Cléac’h and some of the sailors with foilers like Alan Roura (with Sébastien Audigane) and Arnaud Boissières (with Xavier Macaire). We are likely to find ourselves doing battle in this group of boats. We’re going to have to work extremely hard most of the time, as our boats are very similar in terms of performance.” For Yoann Richomme, the goal is clear – “Ending up as the first boat to the finish with daggerboards.”

Dalin, Beyou, Ruyant: three men on a quest for glory

Roll up, roll up, suspense straight ahead! Tonight will be crucial for the leaders of the Vendée-Arctique-Les Sables d’Olonne. Charlie Dalin, Jérémie Beyou and Thomas Ruyant will be the first to tackle a vast expanse of …

Charlie Dalin on Apivia has had to bide his time for a few days on the righthand side of the course, but it has all come good for him in the last 24 hours as he now leads the Vendée-Arctique-Les Sables d’Olonne Race once…