Getting down to the nitty-gritty! 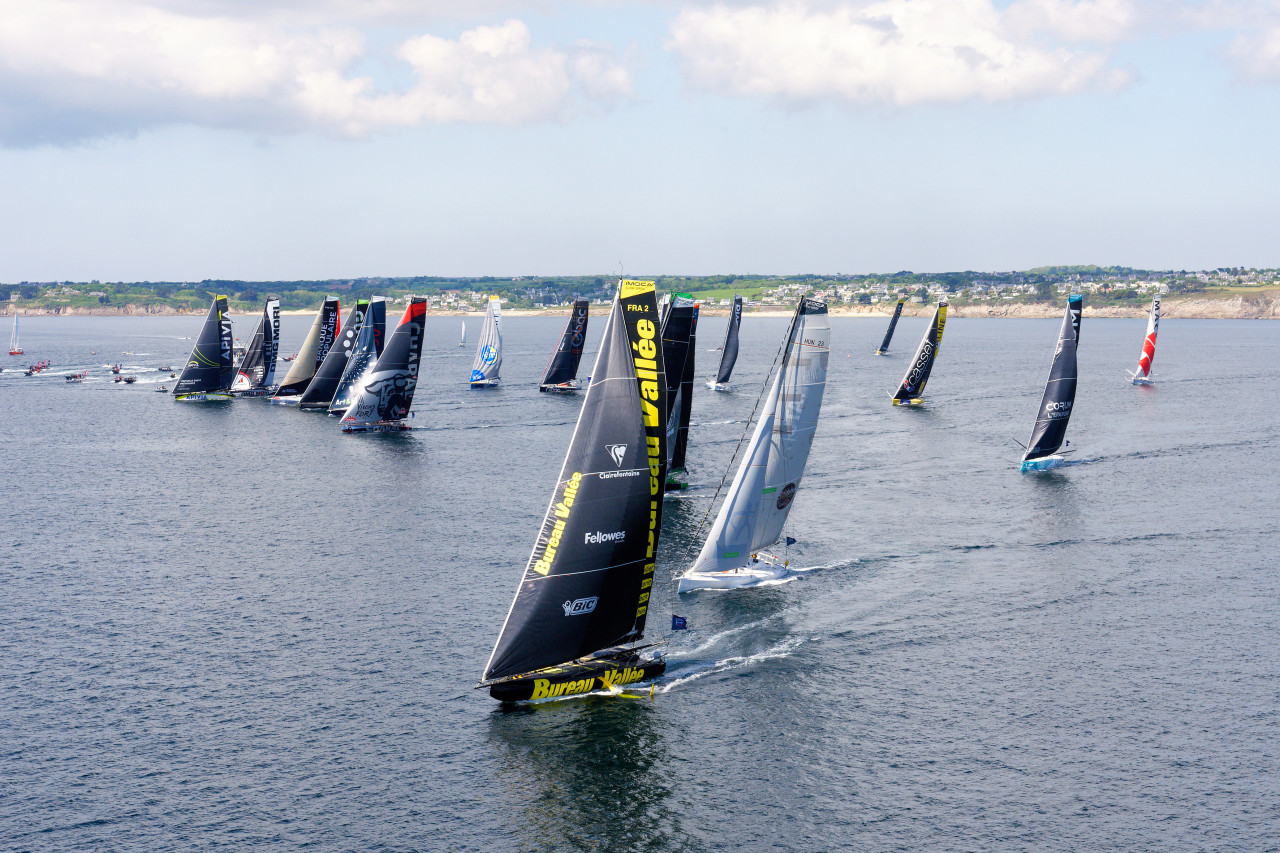 On Sunday 8 May, at 14:40 hours local time, in a slight delay to the schedule, the fleet competing in the 3rd edition of the Guyader Bermudes 1000 Race set sail from Brest in north-west Brittany.

The 24 solo sailors in the IMOCA class got off to a gentle start, propelled along by a W’ly wind of 6 to 8 knots. An erratic breeze is set to complicate play for the opening miles, necessitating a series of manoeuvres to make the Trophée Département Finistère waypoint, which the leading boats are due to negotiate tonight. Within this context, there may be some surprises in store, with the daggerboard boats potentially holding out on the foilers!

“The start will likely be fairly complicated with a light and very shifty breeze,” announced Christian Dumard yesterday. The weather consultant for the Guyader Bermudes 1000 Race wasn’t wrong. Indeed, the Race Committee initially had to delay the start procedure before releasing the entire fleet from a single start line in the early afternoon, with a 40-minute delay in relation to the original schedule. Though Louis Burton (Bureau Vallée), positioned at the end of the line, was unquestionably the quickest out of the starting blocks, the fleet was tightly bunched as it rounded the Saint- Mathieu headland and then headed offshore towards the virtual Trophée Département Finistère mark some 100 miles to the west.

“The first tack will remain pretty light and hence a bit tricky. The sail choices will be key. It’s set to be a bit of a headache with some randomness added to the mix. Despite that, the goal will be to quickly move up to the head of the fleet or, at the very least, stay focused to post as clean a performance as possible. It’s a given that in solo sailing, it’s always the person who makes the fewest mistakes who comes out on top. Furthermore, we know that on a course like this, with the current forecast, there’s plenty of opportunity for error,”comments Jérémie Beyou (Charal).

Variety and technicality on the menu

This sentiment is echoed by Louis Burton, he too awaiting an intense, comprehensive and tricky race. “We’re going to go through our entire sail wardrobe in principle. It promises to be sporty as well as tactical, with various transitions along the way, which won’t always be easy,”explains the sailor from Saint Malo, who highlights the many weather-related uncertainties due to colour the first few miles of the course, as well as the final stretch, especially the section after the Gallimard waypoint to the north-west of Cape Finisterre. “Whilst the situation is still not very clear two or three days from now, there is bound to be a quite a lot going on out on the water. It’s going to be thrilling and I think that’s going to be the case for pretty much all the boats, with or without foils. We’ll certainly be able to validate lots of elements,” added the skipper of Bureau Vallée. Confirming the work carried out over the winter and narrowing down the jobs list at the end of the event are clearly key for the vast majority of the competitors in this Guyader Bermudes 1000 Race, the first of four events, which make up the 2022 schedule for the IMOCA Globe Series.

“We’ll be able to make our first assessment about how well prepared the different boats are and how they rank in relation to the others. The course and the conditions will be the perfect environment for learning since we’re really going to get a taste of everything: light airs, breeze, transitions, ridges of high pressure and fronts rolling through… the whole works,” enthused Thomas Ruyant (Linkedout). Within this scope, downtime will likely be relatively rare. “We’ll have to be able to get a bit of sleep in the midst of all that. It won’t be easy. The name of the game will be to avoid burning out from the get-go and then keeping a clear head right the way to the finish as we don’t yet know how the second half of the race will play out,”continues the sailor from northern France. Indeed, though the situation looks fairly clear on the climb up to Fastnet with a steady breeze, even becoming a little bracing on the approach to the Irish lighthouse, the situation further down the track is less clear. The reason for this is quite an active front and a band of smaller secondary depressions whose intended destination is less certain. One thing that is more certain however is that the first boats should make landfall in Brest by late Thursday. Watch this space.

Quotes from the skippers

Nicolas Troussel (CORUM L’Epargne):“We only launched a short while ago. This Guyader Bermudes 1000 Race is a major first for this year’s racing season. I’m certainly feeling a little stressed as we ready to go. It’ll be important to be fully focused to get back into the match and avoid making too many errors. The start will be a bit complicated with not much breeze. We’ll have to contend with just about every sailing condition, so we’ll need to be vigilant and put pedal to the metal at the right times. There are sure to be some slightly complicated sections and a fair few manoeuvres to make. The primary goal is to sail a comprehensive race, get a good feeling aboard and continue raising my game. The priority is to do things right. In terms of the result, we’ll see how things go as the race progresses.”

Éric Bellion (Commeunseulhomme Powered by Atlavia):“I’m pleased to be making my IMOCA comeback. I have slightly mixed emotions. I’m very happy and very focused at the same time. I have a good boat, with a good team. I’ve come back to the fray because it makes me happy and now I want to do well. I think we’re really going to have fun. We’ll be able to play around a bit in the light conditions with our daggerboard boats, which is really great. It’s not as if the foilers are going to oust us. On a personal level, I’m going to do what I can. I’m not putting any particular pressures on myself. I want to feel proud of my achievement at the end. To do that I want to finish the race, boost my confidence and learn lessons along the way.”

Arnaud Boissières (La Mie Câline):“We haven’t done a lot of sailing yet, but the boat is ready for action. It’s time to go for it now, to demonstrate what she has under her bonnet and show that I can keep up with her. The upcoming course is very technical and the conditions are forecast to be varied. I think we’ll be very tired after four days but it’s great to hit the racetrack. This is what it’s all about, to compete against others and see what we’re made of. We’ll have to be able to extract ourselves from the light airs at the start. The current may help us out a bit initially. We’ll have to select the right sails and my focus will be on trying to stay out of the red. I’m keen to do well. If I don’t do well, it’ll be my own fault and nothing to do with the boat. That obviously adds a bit of pressure, but I’m looking forward to setting sail!”

Quotes from the partners

Mélanie Kerguenou, Director of the Bermudes brand:“We’re delighted to be contributing to the dynamics of a sport we’re heavily involved in, as well as the dynamics of a region. We know how big a presence and what a driving force the Armor-lux group is in the Finistère region and in Brittany as a whole. We are also very proud to be associated with the IMOCA class, a class whose values we wholeheartedly share in terms of performance, technicality and environmental responsibility, since we too are committed to reducing our carbon footprint in the textile domain. We wish all the sailors a wonderful race. We’re thrilled at the prospect of this crazy race and the sizeable line-up. We’re also thrilled that the race is increasing in scale.”

Christian Guyader, President of Guyader Gastronomie:“For this third edition of the Guyader Bermudes 1000 Race, we’re playing host to a very fine line-up as the countdown for clocking up miles for the Vendée Globe has well and truly begun. The 24 participants are excited to be rekindling their ties with competition and with singlehanded racing. The format here, which combines speed runs and a long 1,200-mile sprint, is very appealing and conditions are shaping up to be diverse and varied so we can expect a fantastic race. The next four days will be intense for the sailors and thrilling for those on land!”

24.01World first hydrogen IMOCA yacht construction announced by Phil Sharp and OceansLab…Phil Sharp, one of Britain’s most competitive and successful ocean racers, has today announced the build of a new zero emission IMOCA ahead of the 2024 Vendée Globe.…23.01Foot injury prevents Boris Herrmann from Participating in Leg 2, Yann Eliès to replace him…Famous French sailor Yann Eliès will be sailing aboard Malizia - Seaexplorer during the second leg of the round-the-world race, as Boris Herrmann sustained a foot injury during Leg 1. Briton Will Harris will take over the role of skipper for this part of the race.…22.01GUYOT environnement - Team Europe: Focus on the next leg…When GUYOT environnement - Team Europe still had almost 300 nautical miles to go to the finish of the first leg of The Ocean Race, the race at the top was already over with the arrival in Mindelo on Cape Verde.…18.01Canada Ocean Racing finish the Royal Ocean Racing Club Transatlantic Race.…Racing double-handed, skippers Scott Shawyer and Alan Roberts finish the first race in Canada Ocean Racing history. Finishing with a time of 9 days 12 hours 57 minutes 53 seconds places the duo as 2nd in IRC super zero & Monohull Line honors.…17.01Welcom on board HOLCIM-PRB!…The Onboard Reporter of HOLCIM-PRB, Julien Champolion, takes you to the heart of the first hours of particularly tough races in Gibraltar.…03.01Boris Herrmann relaunches Malizia -Seaexplorer with new foils…New year, new foils, new round-the-world challenge: we have relaunched our Malizia – Seaexplorer IMOCA yacht after an intense three-week refit. In that short period of time, the technical team was confronted with major challenges and, pulling off a tremendous effort, managed to turn the situation around to finish the boat in time for The Ocean Race.…
All news and videos