GUYOT environnement - Team Europe: Focus on the next leg 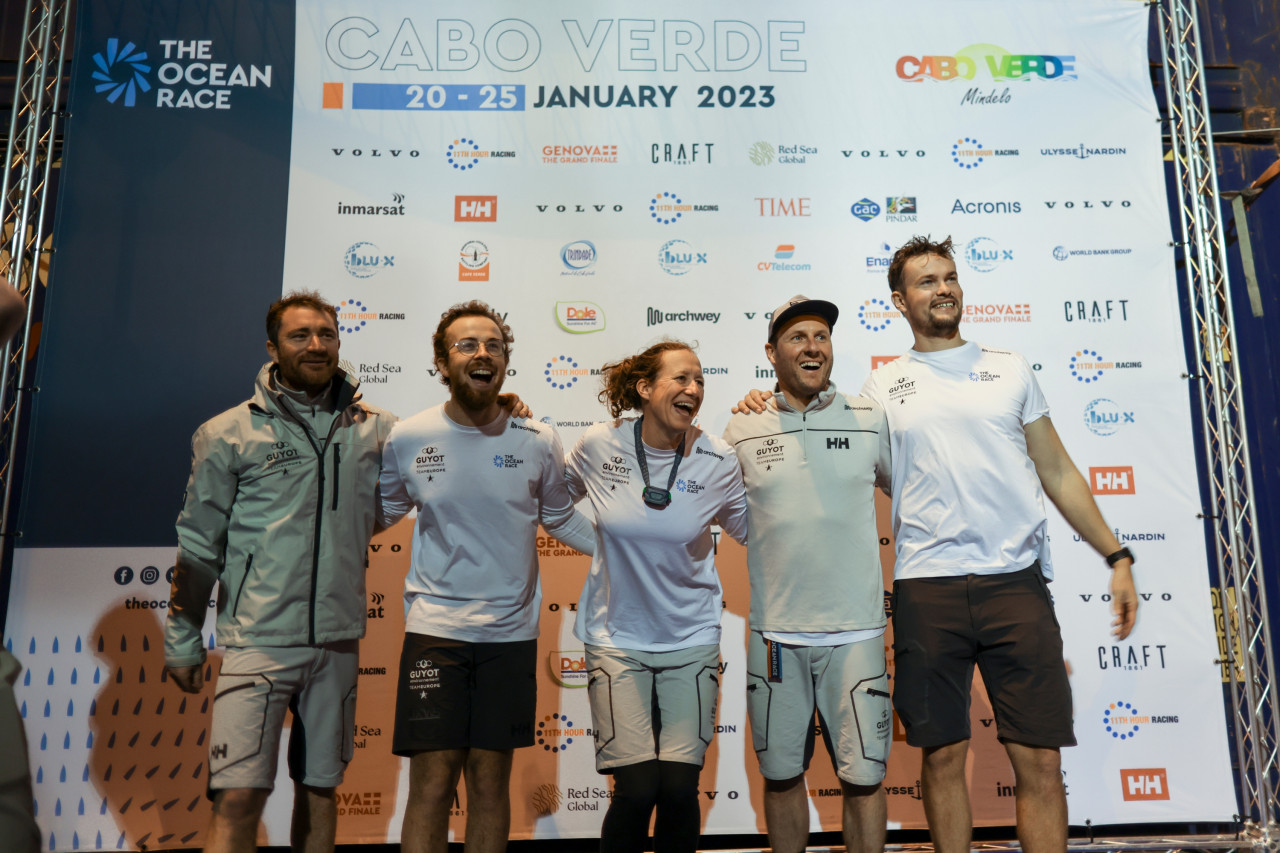 When GUYOT environnement - Team Europe still had almost 300 nautical miles to go to the finish of the first leg of The Ocean Race, the race at the top was already over with the arrival in Mindelo on Cape Verde.

The Holcim-PRB team under Kevin Escoffier and 11th Hour Racing with Charlie Enright had impressively dominated the action of the first 1900 nautical miles of this race around the world, taking the first two places in that order. Team Malizia skippered by Boris Herrmann followed in third place.

The european campaign of skipper Benjamin Dutreux and co-skipper Robert Stanjek could not close the gap to fourth-placed Team Biotherm (Paul Meihat) despite great fighting spirit - too many nautical miles had been lost due to repair work on the sails, outrigger and jockey pole. Problems with the electronics and the autopilot meant further performance losses. Moreover, the risk of sailing through the Canary Islands had not paid off. And so the crew with Dutreux, Stanjek, Annie Lush, Phillip Kasüske and onboard reporter Charles Drapeau used the remaining hours of the leg to work on spirit. At 2:20 am (local time), the team finally passed the finish line after a race time of 6 days, 12 hours, 20 minutes and 37 seconds and immediately turned their eyes to the tasks ahead.

With the leaders uncatchable, the team's task was to keep the spirit high. This was achieved with some distraction and food for the nerves. Benjamin Dutreux chatted over the radio with the captain of a Brazilian freighter and told him about the race. The crew also honed their manoeuvring skills, Annie Lush pulled out some sweets from the depths of her bags, which Phillip Kasüske described as a "boost for morale". And Robert Stanjek, like everyone on board, was happy to have a cold beer ashore.

After crossing the finish line, it was time to analyse the situation and to focus on the next leg to Cape Town/South Africa, which will start on 25 January.

"The leg was long and hard on morale. We didn't get into the race well, then sailed well on the first night and were even in the lead. With the stormy conditions we had to take some damage and the others got away. It was not easy to deal with the situation when we were clearly behind. But we managed to talk to each other and tell ourselves that this is just the first leg. We will have another 150 days together in this race. We have only sailed six. So there is still a lot to come," said skipper Benjamin Dutreux.

Already in the last hours at sea, the crew set about preparing the yacht for the coming leg. Because there is not much time in Mindelo to repair the damage.

"The pit stop in Cape Verde will be a big challenge for us. There is a lot of work to do. Benjamin and Annie, who will be disembarking in the next leg, will do a lot of the work that needs to be done. This will allow Robert, Charles and me to relax a bit more," Phillip Kasüske reported and added: "We improved for the future and I think this is what the race is all about, the team who progresses the most will win at the end."

Annie Lush, who has sailed two Ocean Races around the world, made the stresses of the first week clear: "To be honest, it was brutal. It was tough for us all the way to the Strait of Gibraltar. We had some damage and decided to stop to repair it. The result at the finish is of course disappointing, we also made some unforced errors. That's just the way it is in the Ocean Race. I have also had to accept defeats on legs in the past. But we know how to do better in the future. We have been working on this on board for the last few days. The team is in good shape. We still have some work to do, but not too much."

Robert Stanjek also already looked ahead: "I mean, we we had a moment where we realized, okay, we're out of the game now and we defined some new goals and we were actually practicing different things. That was always our strength in the previous year when we won the ocean race europe, showing a steep learning curve. And this is something which I'm proud of. The team is always turning mistakes into lessons learned and I think we're going to come back strong from this.“