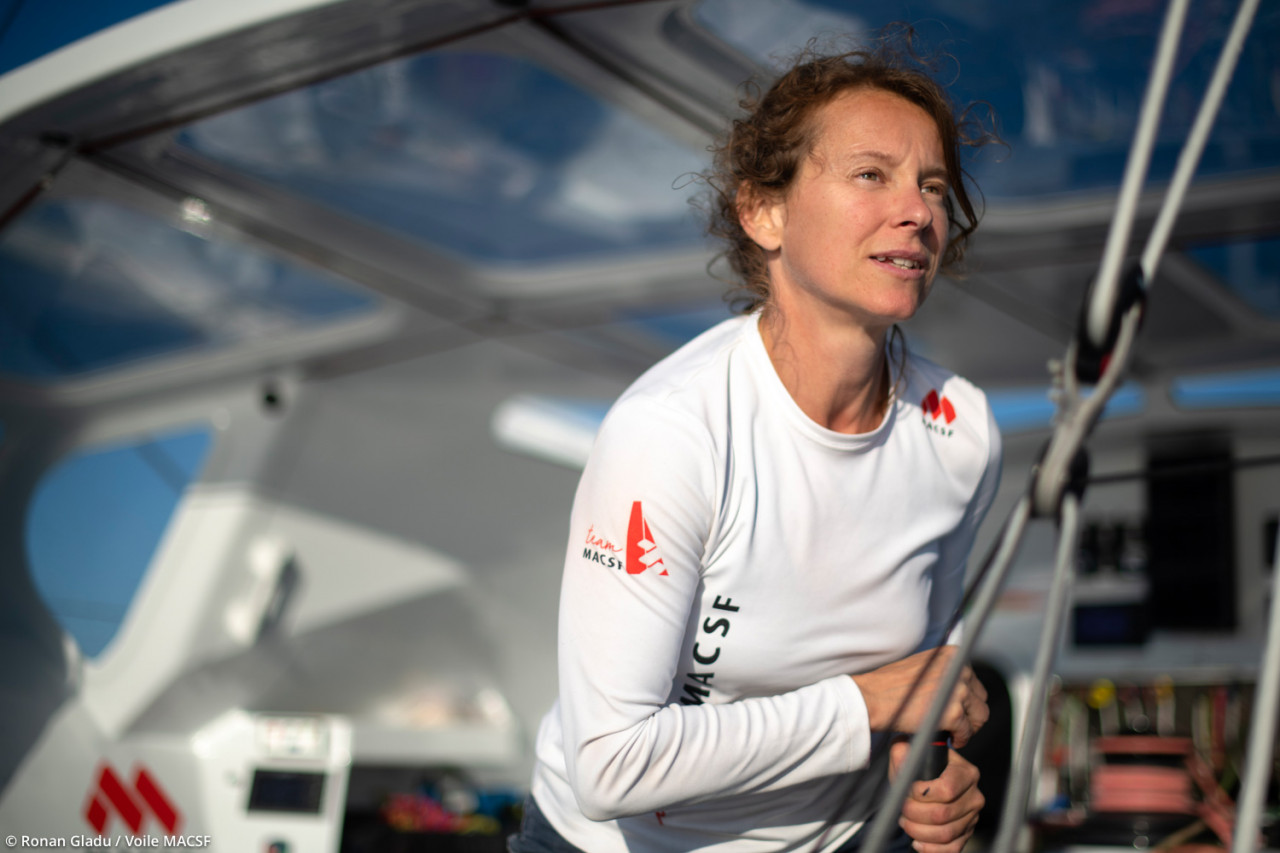 The Franco-German skipper Isabelle Joschke says the new Vendée-Arctique-Les Sables d’Olonne race is the perfect warm-up for the Vendée Globe and she is looking forward to setting sail on July 4th.

Joschke, aged 43 and based in Lorient, was able to re-launch her eye-catching red, white and blue IMOCA, MACSF, in late March and has completed a couple of weeks of test and practice sailing since then. But now she is focusing on the new race that has been created to make up for the cancellation of the Transat.

“I must admit that is it frightening to think that it could be difficult conditions,” she said of the 3,600-mile course that will take the fleet up to the Denmark Strait between Iceland and Greenland. “But it is a very, very good thing that we have this race before the Vendée Globe. I actually look forward to this."

“I know it will not be nice when we go north – it will be cold – but I really need to experience this before the Vendée Globe, so I think it is the perfect race,” she added.

Joschke reckons the sea conditions and temperatures near Iceland could be similar to what she is expecting to find in the Southern Ocean and approaching Cape Horn. “So for me, it is good,” she said. “I don’t like to be cold, but I will take all the clothes I need and all the solutions I have to stay warm and eat enough and not lose too many calories. So it will be very good training.”

She estimates she will be at sea for 12 or 13 days – long enough to settle into a proper offshore routine. “It’s not very long. It could be longer,” she said. “But it’s long enough to practice sleeping properly. On a very short race you can cope with just two hours sleep-a-day. On this race that will not be possible. It’s long enough, like the Transat, so that you have to take care of yourself to be fit even on the last day.”

Joschke’s campaign suffered a big setback last year when her Transat Jacques Vabre ended in the early stages when she and Morgan Lagravière ran aground. That was supposed to be a major test of the boat – the old Safranoriginally launched in 2007 – in its new configuration with VPLP-designed foils, a new rig and a new coachroof among many other modifications. In February she completed a 20-day solo loop in the Atlantic, sailing out to Madeira and then heading west before returning on an Atlantic Low. However Joschke is still keen to get as many miles under her keel in MACSFas possible.

Her first experiences of the new turbo-charged monohull have underlined to her that life on board will not be easy. “I must admit,” she said with commendable honesty, “it is not always a pleasure to sail on a foiler. It was much more confortable before. It was good for me – on my practice sail in February – to know what I am going to experience this winter. It’s fun when the boat goes fast but when there is a sea, and you don’t need to have big seas, it is very uncomfortable. When you are in the boat you have to hold on all the time – it can be dangerous.”

Joschke says finishing the Vendée Globe will be a big success for her campaign which is managed by Alain Gautier, but the competitive former Mini and Class 40 sailor is also eyeing a top-10 finish.

She says that she found the lockdown difficult to cope with at first but then realised it gave her a great opportunity to catch up on rest and sleep. Like many soloists she believes she has pushed herself hard for years and the lockdown was a chance to re-charge her batteries. “I thought, ‘Ok now you have to stop. What can you do? What is the priority for your preparation for the Vendée Globe?’ The first thing was: ‘Ok, let’s rest. Now you can rest and you must, so just be happy to be able to do that,” she said.

As far as the Vendée Globe is concerned, Joschke feels confident the race will take place on schedule. However she is trying to be flexible so that if new arrangements are put in place she will be ready to deal with them, much like changes of circumstance on board during a solo race. “The challenge is to be able to adapt to the situation as it changes,” she said. “Maybe we will not know for certain that we will go until a few days before.The important thing is to stay ready, keep ready and to accept it if something else happens.”

Joschke is well known for being an advocate of gender equality and she is pleased that she could be one of five or six female skippers in the next Vendée Globe. But she says there is no reason why the fleet should not be 50-50 male and female. “So long as we don’t have this there are questions that we can ask ourselves and about our society’s mentality,” she said. “Sailing is not a male thing – there is not gender to it. If there are less women, it is because less women dare to go into it and, if that is the case, we have to ask why? So, for me, we still have to work on changing society.”