Kevin Escoffier: ready to take up where he left off on his new PRB 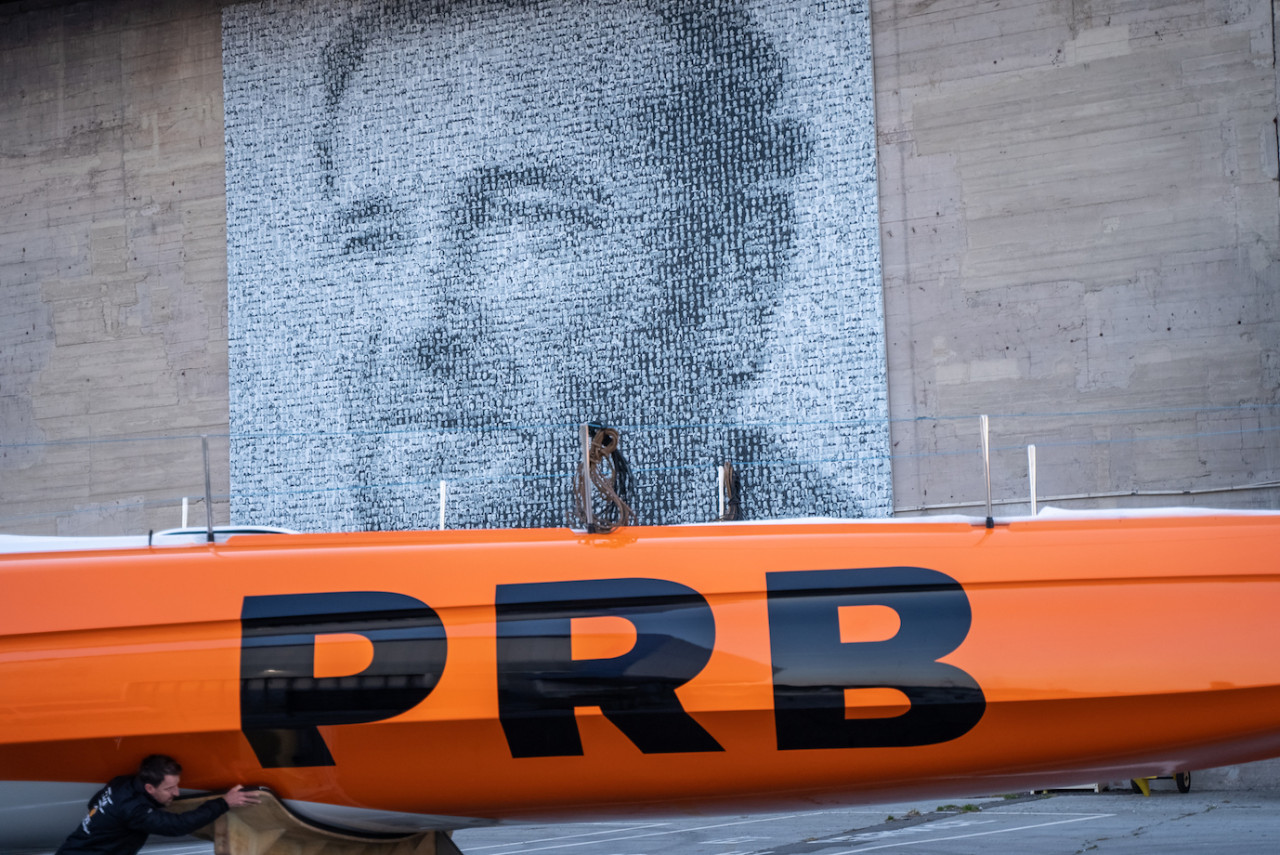 The interesting thing, when you talk to Kevin Escoffier about his new boat – due to be launched on May 7th in Lorient in the iconic colours of PRB – is the element of continuity in his thinking.

Of course almost everyone who knows anything about IMOCA knows about the drama in the southern ocean in the last Vendée Globe, when Escoffier’s old PRB broke up and sank, leaving her skipper to be rescued after a night in his life-raft by Jean le Cam.

That was an incredible story of great seamanship and survival and Escoffier has dealt with the attention it brought him with patience and humility. But as he looks back, he does not see that as a watershed moment in his career. Instead he focuses on what he had been achieving up until then in the IMOCA Class; he views his new boat as the opportunity to build on those successes and to continue the learning process that was already underway.

In this context, Escoffier reminds us that, alongside Nicholas Lunven, he raced the old PRB to second place in the 2019 Rolex Fastnet Race, behind Jérémie Beyou and Christopher Pratt on Charal; he was then second again, also with Lunven, in the 2019 Transat Jacques Vabre, behind Charlie Dalin and Yann Eliès on APIVIA. And then he was running in third place after three weeks in the Vendée Globe when disaster struck.

“You know, when I arrived in the IMOCA Class in 2018, I think we achieved one-and-a-half great years,”  the 42-year-old skipper from St Malo told the IMOCA Class this week, “with second in the Transat Jacques Vabre, second in the Fastnet and I’m sad that the Vendée Globe finished like it did. But we were third on the water, so I want to continue on this competitive side and with a new boat that will be able to be ahead.”

And the Jules Verne and Volvo Ocean Race winner expanded on what he learned on that Vendée Globe. “It was only my second single-handed race and people could imagine that sinking a boat could affect my confidence,”he said. “But me, I would say the opposite. To be fair, the first three weeks in the Vendée Globe with the old boat gave me confidence to be able to sail at the front of the fleet single-handed.”

Indeed Escoffier at the helm of a new boat is a mouth-watering prospect for the IMOCA Class, as he begins the long build-up to the next Vendée Globe in 2024 when he will start as one of the favourites in a super-strong field. This has been a unique process with the PRB team picking up a 2020 Guillaume Verdier design that was already in build for an American owner and then finishing it off, albeit with substantial modifications to the bow and the cockpit. It looks like a smart strategy which Escoffier reckons has saved his sponsor around €1.5 million compared to what they might have spent starting from scratch.

But with new boats for rival skippers hitting the water in rapid succession this year, and even more next year, you have to wonder whether this hybrid creature can truly be termed “new generation,” or is it a sort of halfway house between the last generation and the next? Escoffier is absolutely clear in his mind that this PRB flying machine will be at the leading edge in 2024 against all the other new designs.

“For me, it is a brand new boat,”he said. “I don’t want to say it is a ‘half-generation one,’ because we have done a full new design, even if it is a hull that was originally designed in 2020. We’ve done a full new bow – we changed 4.5 metres of the boat forward – and Guillaume Verdier has designed 23 bows recently and finished with this one – so we have been working a lot.”

Escoffier continued: “We have changed the cockpit to make it easier for single-handed sailing (the boat had originally been conceived as an entry for the fully-crewed Ocean Race) and we have done the foils – it will be a very all-purpose boat and I am very happy with it. We have seen in previous Vendée Globes that you need a reliable boat, you need to know it very well and it depends on how hard you push it. I think with the boat we’ve got now, we will have one of the five fastest boats in the next Vendée Globe.”

Reliability is another fascinating subject with Escoffier, who is regarded as one of the very best all-round talents on the water – a sailor who can race at the front but also turn his hand to repairs of all kinds on board. With this project, he and his new PRB shore team have been working hard on reliability even before anything has gone wrong or the boat has even got wet.

“I have built three IMOCAs and three Ultimes and I know that, even if you do everything you can to have a reliable and good boat, you will have issues,” he explained. “The question is not whether we will have issues, the question is how you deal with the issues and how to make good choices. We have been working a lot on all the systems on board, to be able to not only solve issues alone on the boat, but also to be able to check them everywhere. Already I have been thinking about how we will be able to solve problems in the future.”

Escoffier is proud to have, as he puts it, the “honour” to be representing PRB, the longest running commercial sponsor in IMOCA history, with 30 years of unbroken support of great sailors on the Class, among them Isabelle Autissier and consecutive Vendée Globe winners Michel Desjoyeaux and Vincent Riou, who has been taking a keen interest in the new project. Escoffier recalled that the PRB president Jean-Jacques Laurent had informed him, even while he was still on Le Cam’s boat in the southern ocean, that the sponsorship would continue with a new boat.

“When you have a big issue like that (sinking a boat), I can tell you, you can look forward and imagine the future because there are people like Jean-Jacques that trust you and they trust you even in your worst moment,” said Escoffier. “So if there is one guy I would like to thank it is him. For the team overall, there are plenty of people who have been working on the boat that I trust, that are pushing very hard to produce the best possible boat, but I won’t say one name because I don’t want to push one person instead of another. But I am very, very proud of the job we have done, not only with the boat but with the team we have assembled.”

The first goal of the racing programme is the Vendée Arctique in June, but Escoffier says that his participation in that race will depend on how the early sea trials and testing goes with the boat. If there are teething problems, the new PRB’s debut on the racecourse may be delayed until the Défi Azimut-Lorient Agglomération in September. Then the big target will be the solo Route du Rhum-Destination Guadeloupe, starting from St Malo – Escoffier’s home town – in early November.

Another question is The Ocean Race, especially given the fact that this boat was originally intended for that contest. Escoffier has great memories of that epic challenge, having taken part twice as part of Charles Caudrelier’s Dongfeng Race Team that won it in 2017-18. He is not ruling out his own IMOCA entry, but the main focus continues to be on the next Vendée Globe for the first few years with this boat.

“We don’t have many opportunities to go sailing in the southern ocean on these boats, and I think it would be a great opportunity to learn the whole boat and to race with a full crew,” said Escoffier. “By doing the Volvo Ocean Race, I learnt that it’s the best way to learn a boat, and to push the potential of a boat. But it will depend on PRB and depend on a co-sponsor coming in with us and when that happens.”

You have to wonder whether this articulate and easy-going sailor – a married father of two – feels pressure to continue his high-achieving results, as he rejoins the IMOCA fleet. But Escoffier says expectation among the French and international sailing public is not a problem for him. “I hope it will be a good time (in this boat) and that people will be expecting things from me but, you know, the person who puts the most pressure on my results is me,”he said. “It is me that is looking for a good result when I go sailing, because I am living for that – I am happy if people have expectations of me, but in the end it’s me, not them who is putting the pressure on…”