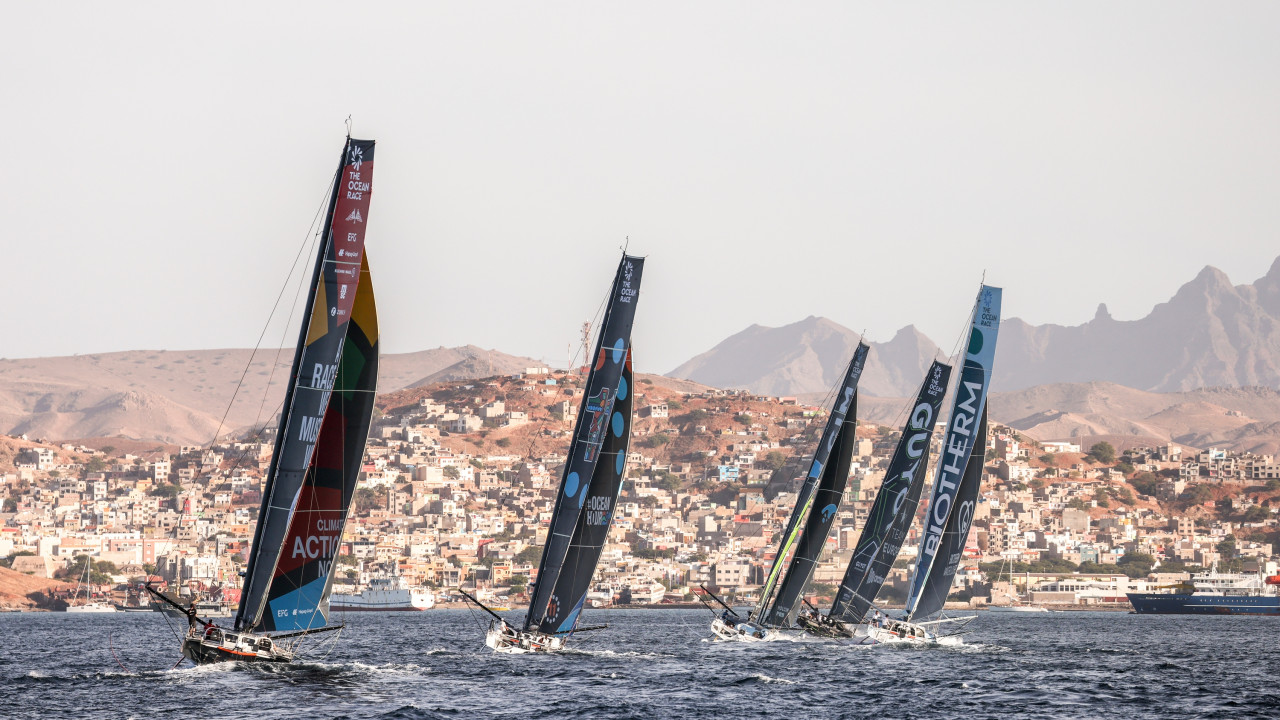 After being buffeted by strong trade winds for the duration of the short stopover, the waters off Mindelo, Cabo Verde were relatively calm on Wednesday for the start of Leg 2 of The Ocean Race.

The short stopover marked the first time The Ocean Race has visited west Africa and this island chain despite it featuring in the race course for all 14 editions as a tactical consideration on the leg from Europe down to the south Atlantic Ocean.

Crowds flocked to Ocean Live Park to welcome the VO65 and IMOCA fleets or arrival this past weekend, regardless of the hour, and aided by the entertainment and concert programme that kept the OLP hopping late in the night throughout the stopover.

Out on the race course on Wednesday, teams had a short lap of a reaching course to navigate before heading out to sea, destined for Cape Town, some 4000 nautical miles -and two weeks - of racing away.

It was Robert Stank’s GUYOT environnement - Team Europe and Charlie Enright’s 11th Hour Racing Team who burst off the line with speed, just ahead of Biotherm and Holcim-PRB, with Team Malizia last across the line.

On the reach out, GUYOT environnement held off Holcomb-PRB to lead around the mark and on the return through he start line before heading out to sea, Stanjek and his crew showed good boat handling through the manoeuvres to lead the fleet out to sea.

A short time later, it was Holcim-PRB with 11th Hour Racing Team to windward and in better wind, leading GUYOT einvironnement - Team Europe, Biotherm and Team Malizia. But the racing is extremely close and the deck will surely be shuffled a few more times overnight.

The wind was in the 7-10 knot range from the northeast throughout the start period, but is forecast to ease overnight, a far cry from the 25 knot trades that have been a feature since arrival.

The light winds mean it will be tactically difficult race over the first days, something already playing out with teams deciding how far south to position themselves compared to making miles to the west.

“It’s a big challenge. We have to manage the wind shadow from the islands, which means we need to get south, but then the doldrums are very big and normally being further west would be safer,”said Sebastien Simon, who is joining GUYOT environnement - Team Europe for this leg.

“It is a big doldrums at the moment. We’re not sure where to cross yet. It will be shifty and interesting for sure.”

For the winner of the opening leg, Team Holcim-PRB, the interest is in seeing the boats and sailors in different conditions from leg one.

“I’m sure we will see different characteristics of the boats and the sailors too,” said skipper Kevin Escoffier. “But the mindset for us is the same - pushing hard, always!!”