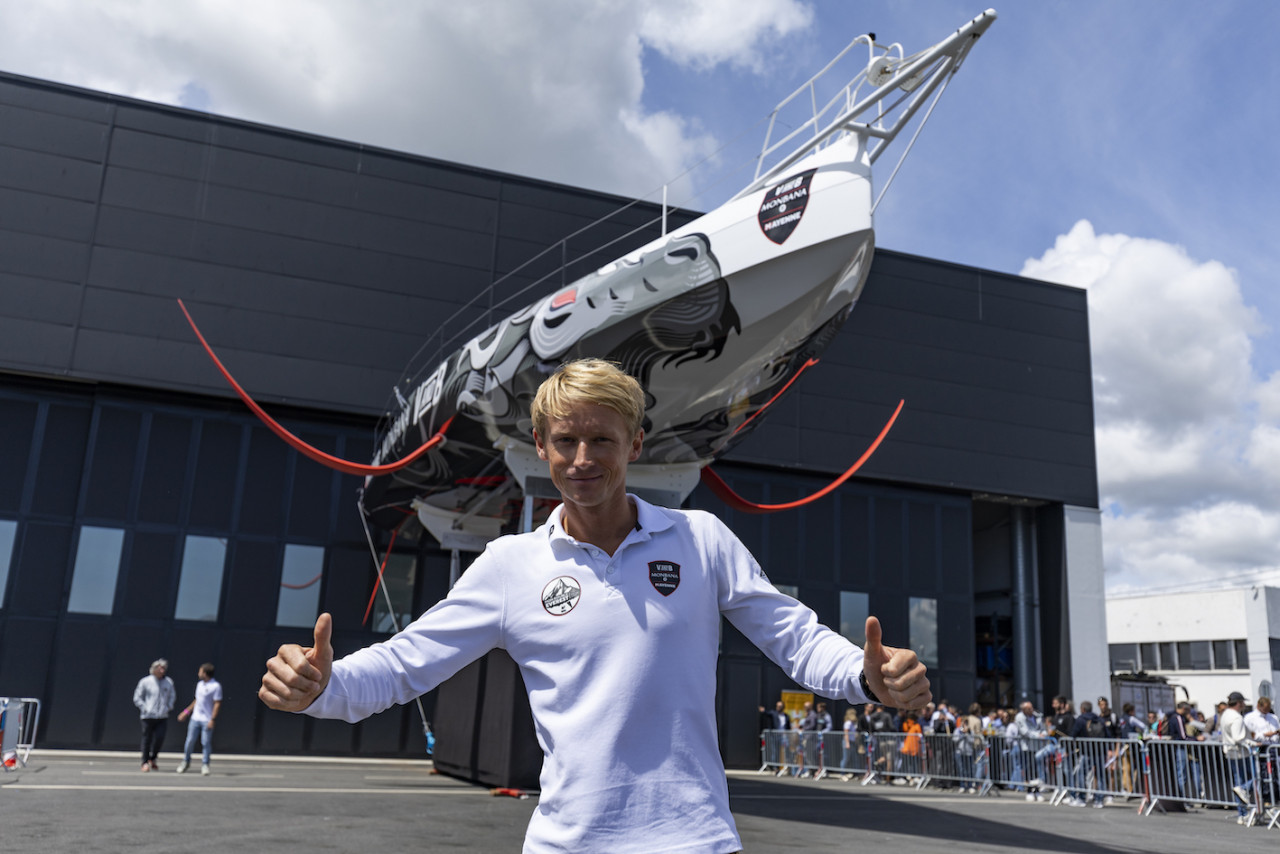 So far he has not had that opportunity because he has not had the boat under him to show what he can do. But the Breton skipper from Cancale, who finished 10th on debut in the Vendée Globe in 2021 in a VPLP-Verdier daggerboard design from 2007, now has the machinery he needs to make an impression at the top end of this increasingly competitive fleet.

Sorel is regarded as one of the IMOCA Class’s complete professionals in everything he does – sailing, communications and management of commercial partnerships. He has no qualms about stating clearly what his goals are as his new boat, V and B-Monbana-Mayenne, comes out of the shed at MerConcept in Concarneau for the first time.

“Our project has changed in scope,”he told the Class. “With my former V and B-Mayenne, I wanted to finish races. Today I’m aiming for performance. It’s very motivating to have a boat that can race at the front. We are up against boats with much higher budgets, but we also know that in a Vendée Globe there is not necessarily a link between budget and performance.”

And this is where Sorel and his team, which includes his brother, Jérémy, in the head management role, have been clever. They have a new boat that is a sistership of Charlie Dalin’s current Apivia, that was originally designed in 2018 by Guillaume Verdier. But they have taken that and modified the bow to increase buoyancy when sailing fast downwind and added new foil designs. The combination could be potent and could benefit from all the experience that Dalin has accumulated in the hull already. “The boat is a sistership of Apivia, so there are a few technical differences,” summarises Sorel. “If the architects have optimised the plans, it remains the same boat overall.”

The new V And B-Monbana-Mayenne, which includes sustainable solutions using bio-sourced resins and flax for various components, is hitting the water for the first time during what can only be described as the golden age of IMOCA and Sorel is very happy to be part of it. “It’s very motivating to be part of a class which is full of ambition,” he said. “I think it’s one of the most dynamic classes of boats and can offer so much racing at this level of competition. The IMOCAs are Formula 1 boats and the teams are real racing teams.”

The first goal is to complete this autumn’s Route du Rhum-Destination Guadeloupe to qualify for the Vendée Globe, but Sorel says his new “Dragon of the Oceans” will not be ready to sail at maximum performance until next year’s Transat Jacques Vabre (TJV). After that the plan is to race in the Transat CIC and the New York-Vendée in 2024, before setting off on the Vendée Globe.

The sailor with boyish looks, steely blue eyes and a shock of blond hair, who won both the TJV and the Rolex Fastnet Race in Class 40s in 2017, still makes the point that you have to finish the Vendée Globe. But he doesn’t mind admitting that the very top end of the fleet is now his goal, even though that is going to be a very busy echelon in a class with 14 new boats coming on stream ahead of the next solo round-the-world classic.

We asked him whether he thinks he can win the 2024 edition. “The Vendée Globe is not a race like any other, it is a non-stop single-handed round-the-world race,”he said. “Our goal is not to win it, but first of all to complete it. In the last edition we were top-10; today we are aiming for top-5.”

Sorel runs one of the most effective communications campaigns in IMOCA with his old partners, the wine and beer retailer V And B, the Department of Mayenne now joined by the chocolate manufacturer Monbana. Together they support his efforts not just on the ocean, but his commitment to the charitable association Vaincre La Mucoviscidose (Overcoming Cystic Fibrosis). This is symbolised by the enormous dragon motif which has been executed in stunning style on his new sails in black, grey and red, following on from the theme established on his old boat.

The former consulting engineer, who is committed to raising awareness and funds for the charity – he recently climbed Mt Kilimanjaro in aid of it and is even planning an assault on Mt Everest next year – is proud of this aspect of his new boat, which has been promoted with a spectacular pre-launch video.

“We experienced a very strong adventure with our partners and the association Vaincre La Mucoviscidose during the Vendée Globe,”said the skipper, who started sailing at the age of eight and who idolised Michael Schumacher as a child. “With this experience we knew we wanted to grow the project and start again with an ambitious project. Monbana, a third partner, came on board to complete the budget and together we dared to build a new boat. It is very motivating for all of us to start again with such a strong project.”

Sorel added that if this team has the broken rules in any department, it is in the execution of the graphic design on the new boat’s hull and sails. “Our dragon required no less than two months of work, with stencils, hand-painting and a team of 10 painters, plus three people in design, working with a world famous designer (Yann Legendre)!”he said. And we will be able to see this very soon because this new IMOCA will hit the water in Concarneau on Monday 27th June.