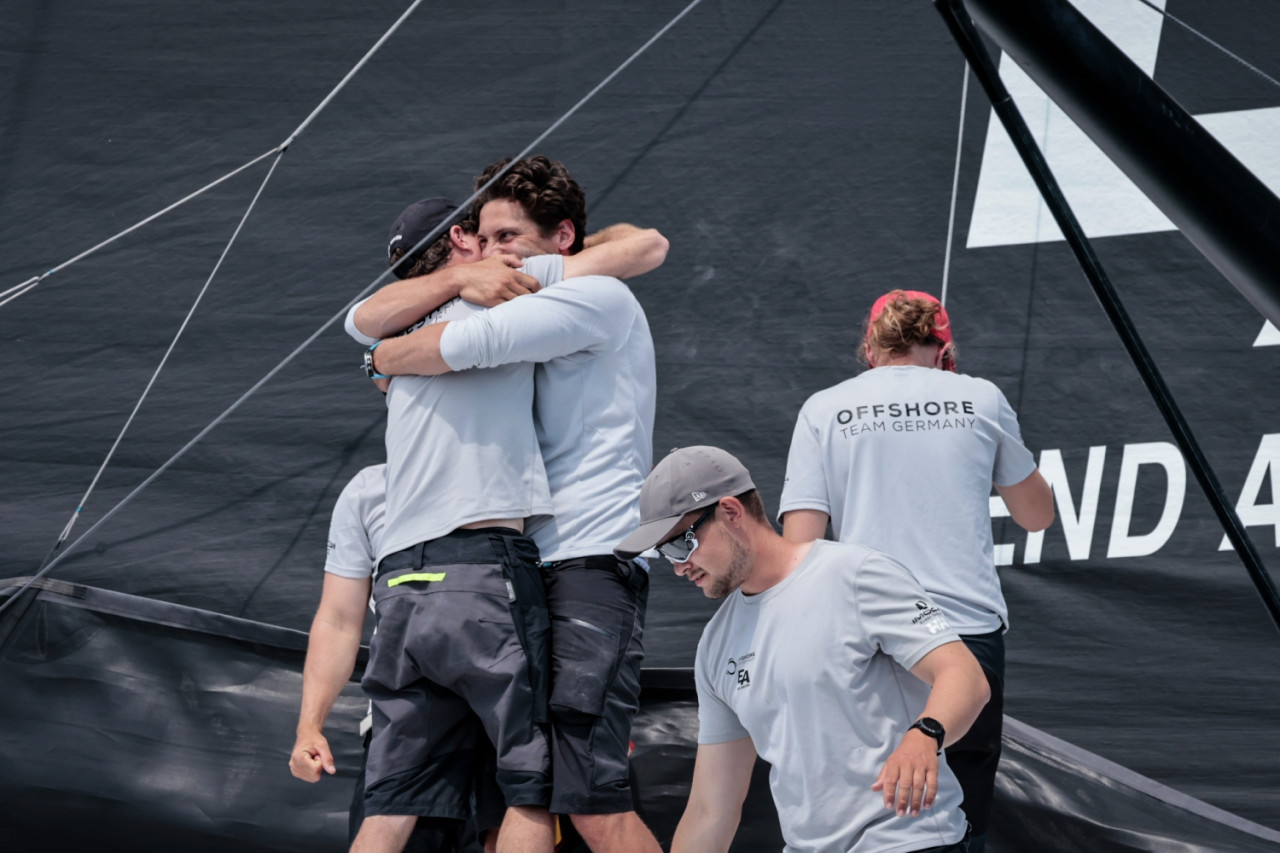 The celebrations are still on hold because the final podium has yet to be decided in the inaugural edition of The Ocean Race Europe, but Robert Stanjek’s Offshore Team Germany crew have one hand on the trophy after a masterful performance in Leg 3.

This was not an easy 578-mile passage from Alicante to Genoa with light, variable and sometimes non-existent winds, but the German crew liked their northern option from the start and they made it pay, big-time.

Stanjek, with the French soloist Benjamin Dutreux on strategy, saw the opportunity to go north of the Balearics and worked the breeze along the Spanish and French coasts and it paid them back handsomely.

They built a big lead over the other four IMOCAs, who went south of Ibiza and Majorca and, although they were pegged back in the closing stages, they ran out comfortable winners, ahead of Thomas Ruyant’s team on LinkedOut and Charlie Enright’s crew on 11th Hour Racing Team.

“I am very happy with how we have delivered so far – whatever the outcome this is a great event for us and now we have to find the re-set button. It’s two days of rest and then we take it from there,”said a delighted Stanjek on the dockside in Genoa as he looked forward to the deciding coastal race on Saturday.

Offshore Team Germany go into that battle – inevitably another very light wind affair – on 14 points. They are just one point ahead of LinkedOut and two points ahead of 11th Hour Racing Team, with three points available for the winner on a racetrack that is likely to suit the German boat that has daggerboards but no foils.

We asked Stanjek to describe the four-day trek from Alicante. “It was not our intention to split from the fleet because we know that the element of risk management (with the weather) in the Med at this time of year is a bit difficult,”he said.

“Actually we had quite a conservative approach, but all our routings were taking us to the north of the Balearics, so we were quite confident about sailing up the Spanish coast to the north. Then all of a sudden we found a nice lane with nice pressure which lifted us from the fleet very fast and within – let’s say four or five hours – we had a massive split with the rest of the IMOCA fleet. And from that time on we were aware that we were sailing two different races – they had a race and we had our own race.”

Stanjek said that even though his 2011-vintage Owen Clark-designed IMOCA had opened up a big lead, as it dived in and out of the French coast off Hyères, it was never easy. “It turned out that we had the better route and it was quite thrilling in the end with all the shut-downs of the wind, but anyway we made it – it was a fantastic race,”he said.

The performance of this crew, that also includes the Briton Annie Lush and German sailor Phillip Kasüske, has surprised many, given that this is Stanjek’s first race in IMOCAs. His background is not in the Figaro circuit, but Olympic sailing in the Star class. But he reckons the combination of talents and backgrounds – Lush was also originally an Olympic sailor before going onto The Ocean Race – gives the team unique strengths.

“I am finally very happy to sail my own first race (in the Class),”said Stanjek. “My philosophy of a good team was always to combine good, precise Olympic sailors with offshore experience, and I think I managed it very well. It is very obvious that we go into details, and everyone brings good ideas to the table, and we have no egos in the team – everyone is listening to everyone else and it is a very flat hierarchy.”

Dutreux has been enjoying the challenge of The Ocean Race Europe and fully-crewed IMOCA racing, and said this last leg was incredibly intense that required the team to fight to the end. “Three offshore legs and three different winners, the game is very open in IMOCA,”he said. “It’s crazy and there is something for everyone and that is great.”

“We’ve had weather conditions that have allowed us to show off the strengths of our boat and that has allowed us to be in the game. We know we don’t have the same boat characteristics (as the others), and that we don’t necessarily have to go to the same place on the water, and that went well,”he added.

The single-hander who finished ninth in the Vendée Globe, was impressed by the way the team handled the exhaustion. “On stages like this one you get through to the human element and people start to get very tired,”he said. “When you’re on your own, you don’t exchange information and you tend to put everything on yourself. Sometimes we didn’t agree and that’s when everyone comes back to their role; mine was to say ‘we’re going there, we’re doing that.’ And it’s not always obvious.”

Kasüske, whose background is in Finn sailing, thoroughly enjoyed what was also his first experience of offshore racing. “It was pretty interesting,” he said. “I learnt so much. The life on board for four days is pretty amazing. You get into a nice rhythm, even with the little sleep you get. It felt like a big adventure more than a race – it was a great experience which is so different to the inshore racing I’ve done.”

Whatever the result on Saturday, this has already been an outstanding debut by the German team who will now focus on an entry in the Transat Jacques Vabre with Stanjek teaming up with another – as yet unannounced – sailor before the focus shifts to next year’s Ocean Race. For that contest the boat they call Einstein – which has its own way of moving through time and space (!) – will have foils fitted.

“Our main goal is to get to the starting line of The Ocean Race,”confirmed Stanjek. “And therefore, of course, we will put foils on the boat. We have waited on purpose for a long time because we wanted to wait until the result of the Vendée Globe, but it’s time this winter to put the boat on foils.”