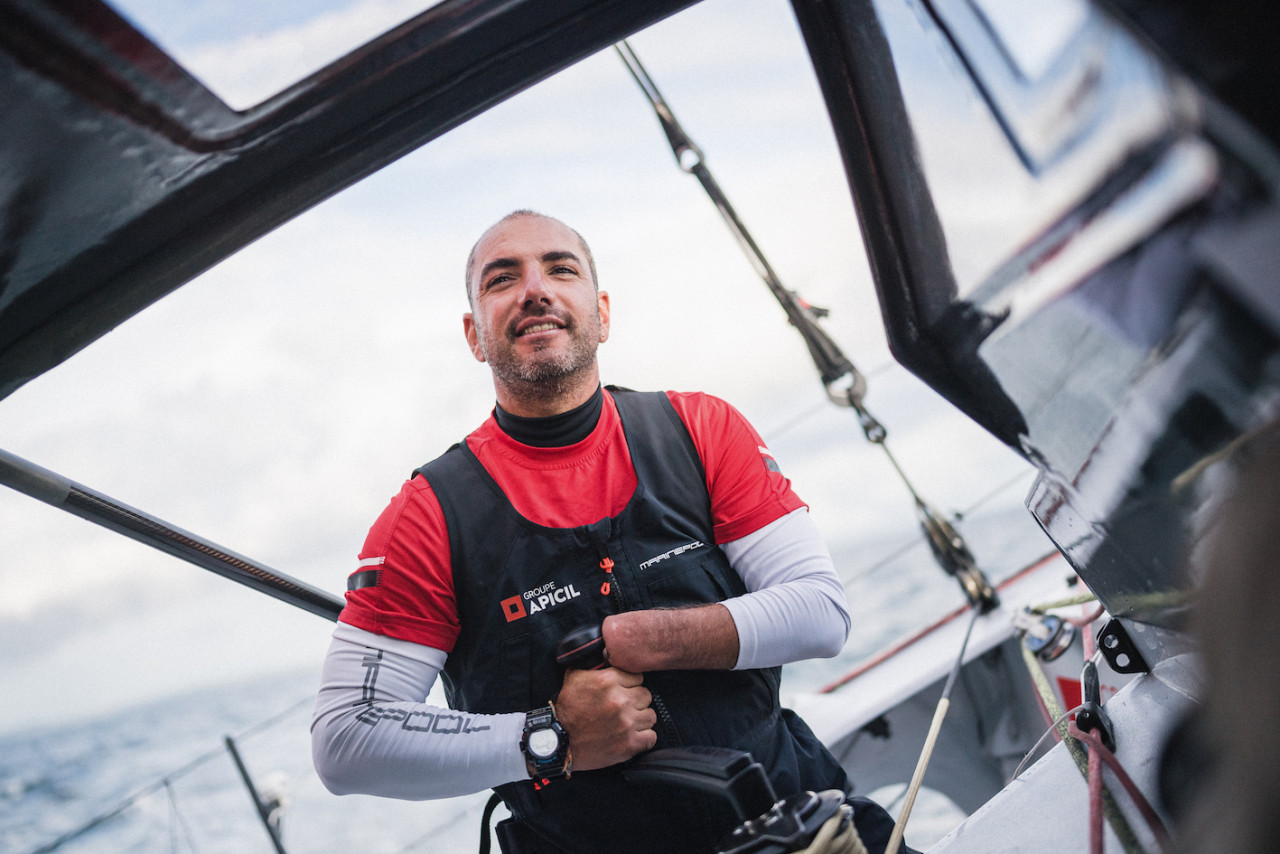 During this epic Vendée Globe, various sailors are making names for themselves and are reaching fans of the sport in all corners of the globe. But perhaps none more so than Damien Seguin who was born without one hand and who has been sailing a remarkable race that has surprised even his own team.

A 41-year-old married father of two kids, Seguin cut his teeth in the sport as a highly successful Paralympic sailor, winning three medals including two golds. Then he moved into solo and double-handed ocean racing and his progress has been dramatic through three Transat Jacques Vabres and two Route du Rhums.

But at the helm of the red and grey Groupe APICIL, an old 2007-vintage Finot/Conq-designed IMOCA, no one – apart from Seguin himself perhaps – imagined that he could consistently run with the front group in this race, or hold the leading position among the older daggerboard boats.

Yet Seguin – sailing with his customary intensity and joie de vivre – has accomplished both these feats and has been one of the most consistent performers at the head of the fleet. Currently he is racing in fifth place, as the leaders continue to head north off the Brazilian coast. He is just over 50 miles behind the new leader, Charlie Dalin, and is two places and 65 miles ahead of the next non-foiler, Benjamin Dutreux on OMIA Water-Family.

With 4,400 miles to go, Groupe APICIL is in good condition and Seguin is in high spirits and up for the final battle to the line off Les Sables d’Olonne. There is every chance that he could finish on the podium, while a top-six finish is easily within his grasp. These are two outcomes which represent an extraordinary feat of competitive seamanship for a man who is determined to show that, even with his disability, he can compete with the best able-bodied solo sailors in the world.

The highly experienced offshore racer Yoann Richomme is among those who know Seguin best, having sailed with him off-and-on over the past 10 years before helping him to prepare Groupe APICIL for this race. Richomme is quite honest about the fact that his friend’s performance has surprised even him. He points out that Seguin’s project does not have a big budget and he did not have many people helping him modify his boat and prepare it before the start of the race.

“The goal within two months before the start was really to finish this race,” Richomme told the IMOCA Class. “I can tell you there was no other objective. Of course Damien was going to try and do his best but, for us, it was all about reliability – we weren’t expecting him this high in the ranking.”

Richomme has been seriously impressed by Seguin’s ability to match – and stay ahead of for long periods – the most experienced sailor in the non-foiling division. “It is one thing to be close to the leaders…”he said, “but another thing to be ahead of Jean Le Cam, who is the reference in the non-foiling boats. And in that sense Damien has done really well for sure. I’m impressed and really happy to see this – it’s been incredible to follow his progress and I’m really happy to have shared the preparation of this race with him.”

Richomme offered a fascinating insight into how Seguin sails. He says the Frenchman, who is based in Port-La-Forêt, has not adapted the hardware on his boat to himself but has adapted himself to the hardware. The only exceptions being the cockpit coffee grinder winch, which has a custom-made slot for his left forearm, and a small gizmo Seguin has developed to help him empty the contents of packets of freeze-dried food.

“He can do most things like anyone else; he has found ways to do them, but when you sail with him you don’t even notice he’s missing a hand,”said Richomme. He says an important aspect of his disability is that Seguin’s left arm is complete to his wrist, which means he has been able to learn to use it to grapple with sails or ropes very effectively.

The key is his own ingenuity in finding ways to get jobs done that able-bodied sailors can accomplish without a thought. “For example,” explains Richomme, “he can tail a halyard, as if hand-over-hand. He does a half-turn around his wrist and, when you are with him, you can barely see it when he is doing it. That is a good example of how smart he is with what he’s got. It is hard to see a difference compared to a sailor with two hands."

“He just works it out, with little movements or little timings,”Richomme added. “He might put the boat into a slightly different position or maybe he slows it down a little bit more, but not that much because he is very competitive.”

It is that competitiveness that has come to the fore in this Vendée Globe when we have seen Seguin push day-after-day. Richomme says his friend can often get himself into the “red zone” with exhaustion because he works so hard on his boat. “But he is a fun personality to be around,”he said. “We laugh about his handicap and about everything else in the world – he always has a good attitude and he is very positive.”

Through his sailing exploits and his own charity Hands & Feet, Seguin tries to set an example to others with a disability like his about what can be achieved, by just getting out there and getting on with it. He often tells the story of how his parents never bought him shoes with velcro fastenings, but gave him ones with laces like everyone else. The young Seguin had to discover how to achieve what everyone else could so effortlessly do, but he found a way to get it done.

Richomme has no doubt that, whatever happens between now and the finish, Seguin has already made a lasting impact through example, especially with young children. “I’ve been sailing with him for 10 years now and I’ve been really impressed with the message he gets across and how it is seen by other people – he is becoming a legend, a real legend within the sport. He is gaining a status through this race that he hasn’t had before. And that is great because I have seen the work he does outside of it and all the positives he has brought to people’s lives, just by being an example,” he said.

Seguin does not do it alone though, and Richomme mentioned his wife, Tifenn, who is the mother of his two kids but also supports her husband’s sailing in every way she can. While he gets on with his racing, she handles the sponsorship side of his campaigns, oversees his communications and helps to run the team. Once this race is over, Richomme is expecting Seguin to move quickly to try to secure a newer foiling IMOCA for the next Route du Rhum. “That’s what he wants,”said Richomme. “He is heading that way, for sure.”

Richomme himself, a highly decorated solo racer with two Figaro wins to his name – the last in 2019 – was planning to take part in this Vendée Globe, but decided to put his plans on hold. Instead he has chosen to skipper a multinational crew of young sailors in the inaugural Ocean Race Europe which sets sail in May, and The Ocean Race in 2022-23.

His boat – the former VO65 which won the last Volvo Ocean Race in the colours of the Dongfeng Race Team – has been registered under the name of the Mirpuri Foundation, a non-profit organisation that is committed to using sailing to highlight the environmental crisis facing the worlds oceans. Among Richomme’s crew will be the bowman from Dongfeng, the young Australian solo racer Jack Bouttell.

Richomme says that once The Ocean Race is over, he is fully intending to get back into the IMOCA Class in the future and hopes to be on the startline of the next Vendée Globe in 2024.