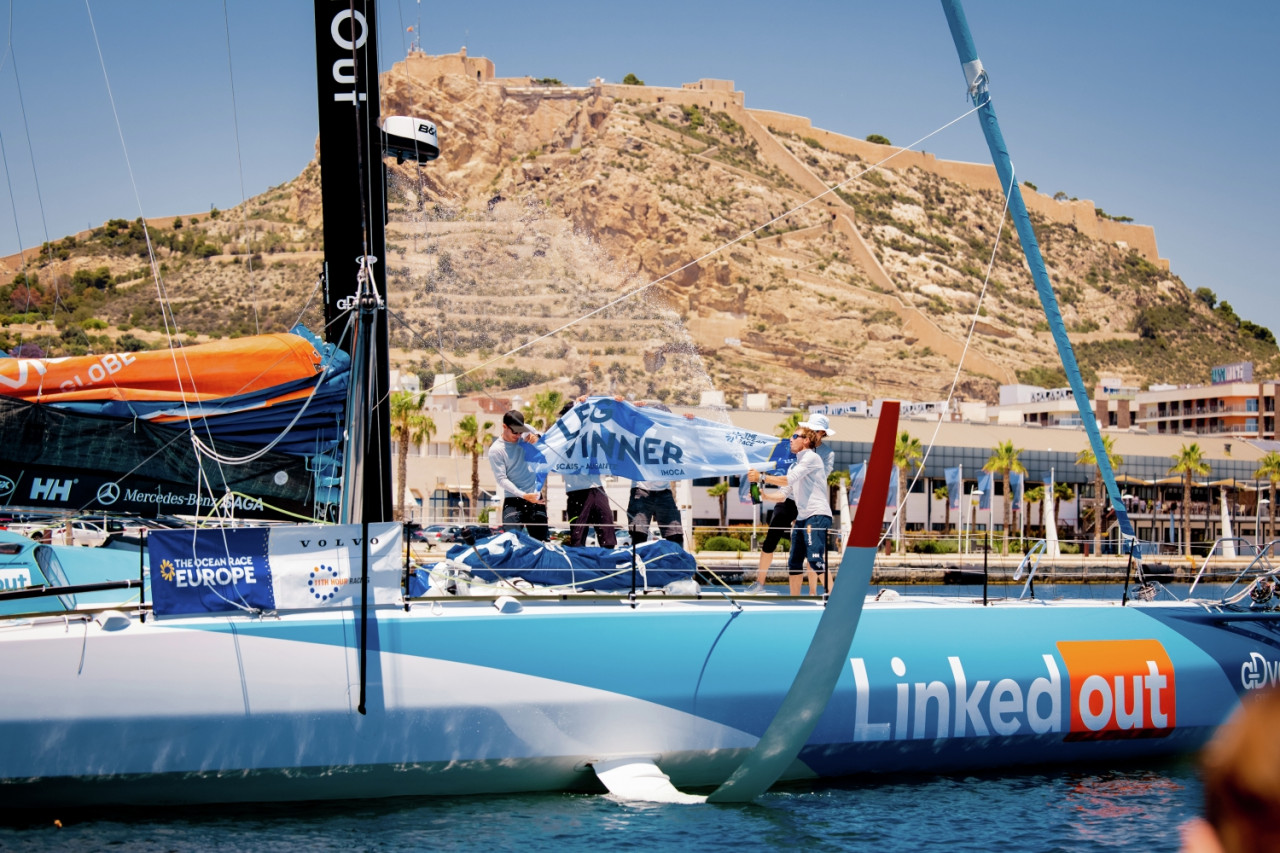 After two of the three offshore legs in the inaugural staging of The Ocean Race Europe, three IMOCA teams are now tied on points at the top of the leaderboard, with just one more offshore leg to Genoa to come, and then what looks like being a decisive coastal race.

The second leg from Cascais in Portugal to Alicante in Spain was dominated from start to finish by Thomas Ruyant and his team on LinkedOut, as the French skipper hunted down a long-awaited first victory on his blue and white IMOCA.

Going into Sunday’s leg start to Genova – there is no coastal race at Alicante – Ruyant leads Offshore Team Germany and then 11th Hour Racing Team by virtue of his superior placing in this leg, with CORUM L’Épargne in fourth place and Bureau Vallée 3 in fifth.

This was a fascinating test for IMOCAs, much of it not suited to their design characteristics, and it came as no surprise that the first finishers were the IMOCA sailors’ friends in the VO65 fleet, who relished the light upwind conditions that followed a tough beat through the Strait of Gibraltar.

The stage suited Offshore Team Germany, which has daggerboards but no foils, and 11th Hour Racing Team which was able to get back into it with only one foil on the starboard side, after re-starting following damage as a result of a collision shortly after the start last Sunday.

Ruyant was delighted to get to the top step of the podium after his sixth place in the Vendée Globe and third in the first leg of this race from Lorient to Cascais.“It’s the first time I’ve crossed the finish line first on the IMOCA circuit,”he said on the dockside in Alicante. “It’s great. I’m really proud and it rewards the work of the whole team behind the project. Here from the start, we were in the lead and we didn’t let up until the finish.”

Ruyant is relishing the challenge of fully-crewed racing in the IMOCA class and has made no secret of his desire to win The Ocean Race Europe, the first event in the new IMOCA Globe Series championship. “This is a small victory because it’s one round of the whole competition and it’s not over yet,” he said. “We’re going to try to keep the good energy we had on the water for the rest of the competition. We’re doing all this to have these moments of victory,”he added, “I’ve been sailing this boat for two years and it’s a boat that designed to win. I know that, but we haven’t succeeded yet.”

LinkedOut was fast going downwind in the early stages of the leg and then led the fleet through the Strait, pounding into headwinds gusting to 35 knots. Ruyant and his crew, that includes the French stars Morgan Lagravière and Clarisse Crémer, then picked their way adroitly through the minefield of light winds as they made their way along the coast of Spain towards Alicante.

It was never a forgone conclusion and once again the IMOCAs finished in a tight bunch, with the first four crossing the line in just over an hour, after three days at sea. On the final night the LinkedOut team were nervously watching CORUM L’Epargne, which went inshore of the Traffic Separation Scheme off Cartagena in search of more wind. But the move did not pay off, dropping Nicolas Troussel and his crew from second to last.

“When CORUM L’Épargne went inside us, we were a bit nervous because at that moment it wasn’t exactly like the weather forecast,”recalled Crémer. “We were afraid that the same thing as the first leg was going to happen(when LinkedOut lost out in the final stages). In the end it was pretty tense and very close with Offshore Team Germany and 11th Hour Racing Team – they could have come back, so we were a bit scared and there was a little bit of pressure on board,”she added.

The comeback by 11th Hour Racing Team apart, the other outstanding performance in this leg was by Robert Stanjek’s crew on Offshore Team Germany. They made the best use of the conditions to grab second place and few could have predicted they would now be sitting tied with two other teams at the top of The Ocean Race Europe leaderboard.

Stanjek’s crew sailed well in the early stages and were threatening LinkedOut as the crews headed east after exiting the Strait. But she then fell into a hole in the wind, just a few hundred metres from boats around them that sailed on unaffected. “After getting through the Strait we worked away in the light stuff and got into a good position,”explained Offshore Team Germany crew Annie Lush.

“I think we were probably first on the tracker at that time but then we just got stuck underneath the fleet – we must have been 100 metres away from the wind everyone else was in, while we ended up in a massive hole. It was pretty crazy because we were next to a lot of other boats – I guess we ended up stuck between two breezes. We had to get out and it wasn’t coming to us.”

The stoppage saw Offshore Team Germany drop from contending for the lead to last place and the leg looked to be over for them. But a smart decision to get close inshore off Cabo de Gata, where they picked up a favourable shift, propelled them back into contention. “That was a really big win for us,”explained Lush. “We ended up with a really big lift and some leverage on the fleet. It was amazing – it was like ‘this is our last shot’ and it worked and we ended up suddenly back in the fleet.”

The German boat did well despite losing data from her wind instruments during the transit of the Strait, which meant the crew could not use the autopilot and had to hand-steer in 90-minute rotations from there to the finish. Lush says this race has been far more taxing than she could have imagined and this relatively short second leg was a real tester.

“Oh my God,”she said, “it was such a long leg, there were so many parts to it. I can’t even remember them all. It seems a long time ago that we were in 40 knots going through the Gibraltar Strait. But we are very, very happy to be able to mix it up with the others – there are moments when they take off, but there are other times when we have an edge, so it’s cool.”
The performance of the foilers will have given everyone in the IMOCA Class further food for thought about upwind and light wind sailing in the latest IMOCA designs. But Crémer, for one, does not think this race – with its unusual course configuration – is likely to be overly-influential in the design race as the class continues to develop.

“I don’t know,”she said, when asked whether people might think again about foiling. “Every time you sail you learn new things and you have new conclusions and you try to move forwards. Maybe this race is going to help us, as IMOCA sailors, to make evolutions on our boats, but I’m not sure it is going to be decisive for the years to come. But of course sailing like this is the best training you can dream of, so that’s why we are here.”