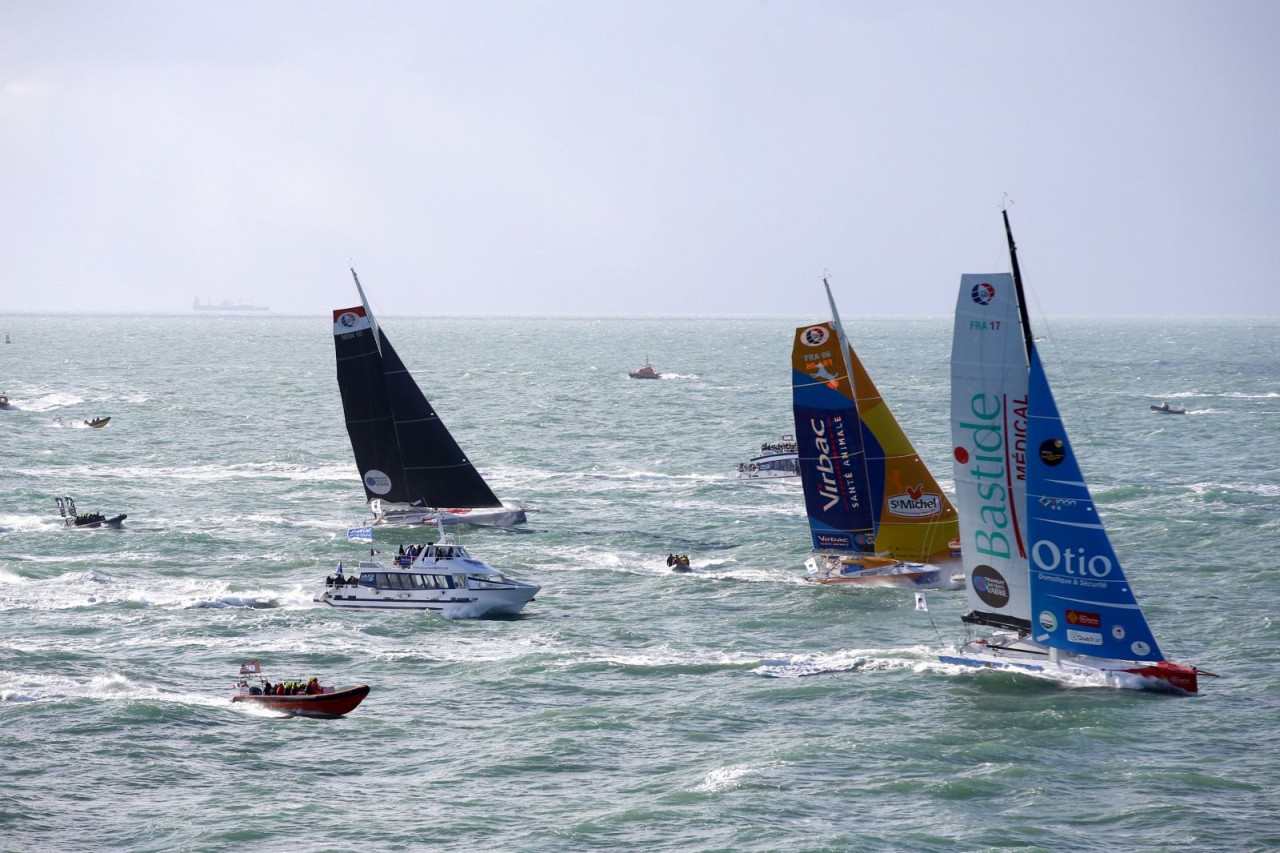 After setting sail on Sunday 5th November from Le Havre in strong winds, the thirteen IMOCAs taking part in the Transat Jacques Vabre are already engaged in a fascinating battle.

After setting sail on Sunday 5th November from Le Havre in strong winds, the thirteen IMOCAs taking part in the Transat Jacques Vabre are already engaged in a fascinating battle. It is no surprise that the foilers are performing particularly well, starting with "Des Voiles et Vous!" StMichel-Virbac and Malizia II. But two boats with straight daggerboards are putting up a good fight -  SMA and Generali. Will they be able to keep up when sailing in the downwind conditions that prevail in the first part of the course to Salvador da Bahia? We’ll be watching closely over the next fortnight...

The menu for this year’s Transat Jacques Vabre was as forecast beginning with a lively start with a fast, yet tricky passage down the English Channel in strong winds, rough seas and fast currents. In this initial phase, Paul Meilhat and Gwénolé Gahinet (SMA) quickly got out in front, rounding the buoy anchored off the cliffs of Etretat and then the Cape de la Hague at the tip of the Cherbourg Peninsula in the lead. They were closely followed by three IMOCAs with foils sailed by Boris Herrmann/Thomas Ruyant (Malizia II), Morgan Lagravière/Eric Péron (Des Voiles Et Vous!) and Jean-Pierre Dick/Yann Eliès (StMichel-Virbac).

Already into the swing of things

“It was quite impressive rounding the tip of the Cherbourg Peninsula during the night. The seas were breaking over the boat and there was a lively 8-knot tidal current added to the wind, which was up and down, making it a bit stressful. There was no time to take it easy, as we needed to be on the attack all the time,” Jean-Pierre Dick explained this morning (Monday). After the NW tip of the Cherbourg Peninsula, Paul Meilhat and Gwénolé Gahinet were unable to ward off the attacks from the foilers during the long reaching tack, which allowed the fleet to make their exit from the English Channel. The double-handed crews taking part in the Transat Jacques Vabre therefore had a busy start to the race in rough and wet conditions, meaning they soon got into the swing of things.

The calm before the storm

The atmosphere had changed on Monday morning, as the crews went through a ridge extending from an area of high pressure and the wind dropped off. The sailors were able to take advantage of a well earned rest, as they await the arrival of a very powerful front with some demanding upwind sailing ahead, before the wind swings quickly around to the NW.

Before dealing with thissudden change, the four frontrunners were led by "Des Voiles et Vous!", closely followed by SMA, StMichel-Virbac and Malizia II. These were the competitors that were expected to do well and they are living up to expectations in this early part of the race. It is going to be interesting to see how they deal with the front that is coming up and that should enable us to see whether SMA can keep up the pace set by the IMOCAs with foils, when they open up their sails. We should add that three of the “mixed doubles” got off to a good start in the race: Louis Burton/Servane Escoffier (Bureau Vallée), Isabelle Joschke/Pierre Brasseur (Generali) and Tanguy de Lamotte/Sam Davies (Initiatives-Cœur) were all ready to pounce before having to deal with the front, as were Kito de Pavant and Yannick Bestaven on Bastide-Otio. The suspense is likely to continue during this voyage to Brazil and we can look forward to a very fast race, as the trade winds appear to be well established.

28.02'Fighting Spirit' Alexia Barrier Fi…On a perfect Sunday morning, 28th Februa…25.02Sam Davies: What it really meant to…When there are 33 skippers in a Vendée G…23.02Miranda Merron: The privilege of sa…Some Vendée Globe and IMOCA sailors are …22.02Ari Huusela and STARK awarded as th…Finnish Vendée Globe skipper and his mai…20.02Manuel Cousin : "You have to live y…That was the maxim that drove Manuel Cou…18.02Miranda Merron : "I’m pleased and p…“I was in a good mood most of the time. …
All news and videos
News