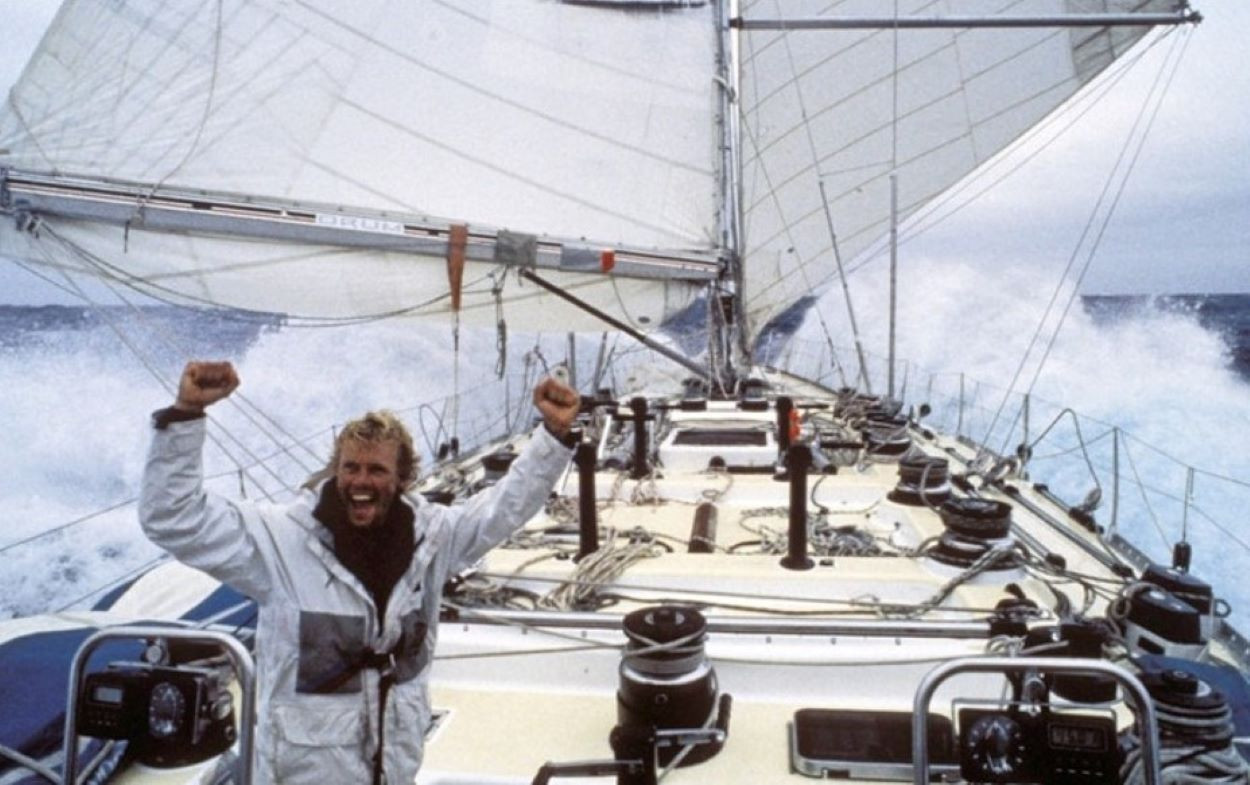 In part five of this series, IMOCA and The Ocean Race shine a spotlight on the OBRs (On-Board Reporters) who are responsible for taking photos, filming videos and writing texts in seemingly impossible conditions, to give the outside world an insight into life on board.

Though their presence aboard each boat has been compulsory for the past 10 years or so, we discover that several sailors have actually combined the post of crew and reporter since the first edition.

In September 1973, a young journalist, sent as a cameraman by the ORTF (French Radio and Television Broadcasting Office) to cover the first Whitbread Round the World Race, stepped aboard the French boat, 33 Export, skippered by Dominique Guillet and Jean-Pierre Millet. At 26 years of age, he went by the name of Georges Pernoud and admitted that he knew nothing about sailing. The interminable first leg between Plymouth and Cape Town was no picnic for the future creator of the legendary Thalassa television documentaries about the sea in all her guises.

In the book he went on to write after this experience, ‘Une équipe, un bateau: 13 000 kilomètres dans la course autour du monde à bord de 33 Export’ (One team, one boat: 13,000km in the round-the-world race aboard 33 Export), he admits: “At no point did I find my sea legs. I spent sixty-five long days aboard, four of which I was throwing up everything I could. I also did some night watches with the crew and there I discovered some passionate and fascinating men. Heading off to sea, is essentially about taking a risk…” With his 16 mm camera, Pernoud filmed the daily life of the sailors, the multiple sunsets and some rough weather manoeuvring, ‘processed the film’ and took the rushes back to Paris after making landfall in South Africa.

He felt unable to continue the adventure in the Roaring Forties and the Furious Fifties, admitting that he was frightened when the weather deteriorated. His images were broadcast on the “24 heures à la une” programme and showed shaggy-haired young sailors reminiscent of The Beatles, manoeuvring the boat with the simplest of apparatus, helming under a cobbled-together parasol in the cockpit and smoking in a saloon that was in a worse state than a teenager’s bedroom. These were images that didn’t showcase the intensity of this race around the planet, a race that would go on to become an absolute must and attract the world’s top sailors.

Like a lot of sailors, Dominique Pipat started out on a 420 dinghy and a Corsaire, but he did not present himself as a sailor, preferring to be a “pictures man,” who was both curious and free. Nevertheless, the mechanical sports enthusiast and born adventurer quickly won over the likes of Tabarly, Gabbay and Poupon. At 30 years of age, Pipat adapted quickly, knew how to be discreet, captured life on board like never before, whether there was five or 50 knots of breeze, and had a real ‘eye’ for a great shot.

Armed with his camera, he competed in the entire Whitbread race of 1981-1982, doing the first two legs on Eric Tabarly’s Euromarché and the next two on Alain Gabbay’s Charles Heidsieck III. “I made four 52-minute films back then for Antenne 2 and Les Carnets de l’Aventure,” he recalled. “At each stopover, I returned to Paris to edit the films day-and-night, before heading back to the boat. I shot on 16 mm negatives”.In contrast to today, where the OBR is not allowed to participate in a manoeuvre, Pipat could lend a hand to the crew, which notably comprised some young 20-year-old sailors like Jean Le Cam and Yves Le Cornec.

Dominique Pipat: “With Gabbay, you were on watch or you were not aboard”

“Eric (Tabarly) wanted me to film whatever happened, but I did stow my camera away in risky situations,”he added. “He said to me: ‘you’re not bothering me because you don’t take up any more room than a winch and because you bring back images for communications.’”We were jostling for first place with Ceramco, skippered by Peter Blake. We blew out seven or eight spinnakers, but that was par for the course for Eric! However, with Alain Gabbay, during the Auckland-Mar del Plata leg via the Horn, which we won, I was part of the watch system. I did some manoeuvring and I only filmed when I wasn’t on deck. With Gabbay, you were on watch or you were not aboard. With a crew nicknamed “les gaziers” (or “the average Joes”), he blew away the competition, especially in the breeze under spinnaker. It was full-on at times. I didn’t know the boat’s limits, but I trusted the skipper and the crew. I had a ball filming it. I had no fear. It was quite incredible.”

When you ask him if he was a trailblazer for the OBRs, Pipat turns the words over in his mind, saying that he’d never considered the matter. “There were certainly few images from on board,”he said, “but I’d come from the Atlantic record campaign with Eric in 1980 on Paul Ricard (they broke the epic time set by Charlie Barr in 1905, Pipat bagging a 7th gold for his film). There weren’t many of us that’s for sure. The cameras weren’t well-protected. I used the American all-terrain Bell & Howell models, which were entirely mechanical and hailed from the Second World War landings; they were rustic but reliable. Our most modern battery cameras soon gave up the ghost, busted by the moisture!”

A kite ancestor to the drone for photographing the VO60!

This discreet Englishman, who lives in Cowes on the Isle of Wight, is not just a photographer; Rick Tomlinson is a professional sailor who competed in three Whitbreads. “I’ve always sailed offshore and I began taking photos on the Maxi, Drum, belonging to musician and singer Simon Le Bon,”recalls Tomlinson. His photos were then published in Yachting World, Seahorse Magazine and Voiles et Voiliers. “I then went on to crew on The Card in the 1989 Whitbread,”he added. “I devised a kite to move the camera away from the boat whilst she was underway – obviously, drones weren’t yet a staple back then…”

In 1993, he crewed in another Whitbread on the VO60 Intrum Justitia helmed by Roger Nilson and then Lawrie Smith, but this time his “official” title was photo and video manager. “They were the first boats to have Satcom aboard so we could send images back to shore. A digital camera didn’t exist at that time and I had to process the film aboard using chemicals to get a negative, which I then scanned on a Macintosh laptop before sending it via Inmarsat,”Tomlinson explained.

Imagine developing your films using the C-41 process, namely three successive waterbaths at 37.8 degrees, which cannot withstand a variation in temperature of more or less than 0.2 degrees. Then drying them on a V060 that is heeled over and fully powered-up, in a soaked sail locker which has to be absolutely pitch black. That’s exactly what Tomlinson was up to, when he was not on deck. “At that time, for reasons of fairness between those who had decided whether or not to have a media reporter aboard, you had to choose between photo and video equipment, or the equivalent weight of the equipment in the form of lead pigs,”he said. “Most of the crew favoured the lead option! However, our navigator Marcel Van Triest and I pushed hard to have this equipment aboard the boat.”

On Intrum Justitia, Norwegian Knut Frostad was the youngest member of the crew, with two Olympic selections to his credit. A few years later and after four participations as crew, watch leader and then skipper, Frostad became CEO of the Volvo Ocean Race and decided to make the presence of an OBR compulsory on every boat. He went on to manage the event from 2008 to early 2016.

The selection process for the post of OBR is seriously hardcore, because you need to be a good, tough and agile sailor, a photographer and a camera operator. Finally, you must also have a knack for writing. “Even if we’re off watch, there’s still plenty to do,”explains Martin Keruzoré, who was aboard Dongfeng Race Team, the winning boat in the last edition in 2017-18. “Each day – and this is the most important part of the job – you have to tell a little story, send a short pre-edited article to race organisation via satellite, along with eight-to-10 photos, plus plan a live broadcast with the skipper or a crew member,”he explained.

And that’s not all. The OBR contributes to the thankless tasks of life aboard too. “We have to clean the boat like the others, bail water, prepare meals and stack (shift gear to windward) – but only our own stuff, as we cannot assist the crew, by hauling a line or a turning a handle…we cannot participate in any manoeuvre. In essence, we can be a bit of a drain aboard the boat. As a result, it’s important to remain discreet and not to get in the way, but if we offer one of the guys a cup of coffee at night, it’s generally appreciated. The idea is to pull your weight, integrate and win over the crew,” Keruzoré said.

It’s worth adding that it’s important that you don’t suffer from seasickness, that you’re as toned and flexible as a cat, to slip into the aft section of the living pod, and that you can maintain your gear, which isn’t always a fan of water and salt. Like the top racers, the best OBRs are quickly identified. A good example is Frenchman Yann Riou, a former offshore racer and a member of the performance cell in the Groupama team back in 2010. Riou is the go-to OBR after his three Volvo Ocean Race participations, not to mention his drone pilot specialism. And for any budding young racing and image enthusiast who thinks that getting a ride in The Ocean Race and on an IMOCA for the next edition of the race would be a privilege and a fantastic opportunity, a strong stomach is a prerequisite given the staggering performance of the latest foilers.