Troussel is out as the leaders fly south… 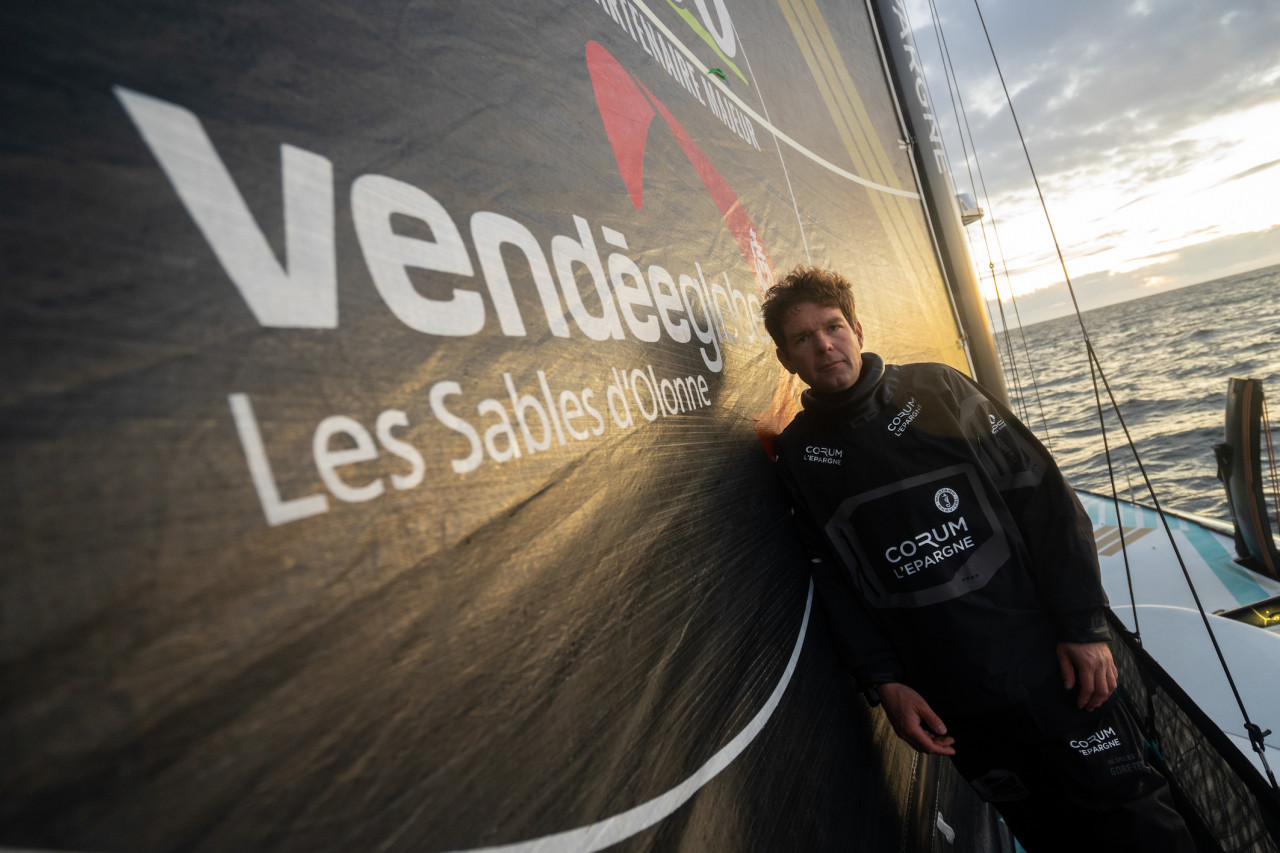 It easy to make the mistake of thinking the leaders are in easier conditions because they are in the trade winds, but the foiling boats in particular are under big stress, charging along at 20 knots of boatspeed and slamming as they do so.

This morning came the first dismasting of this Vendée Globe when Nicolas Troussel called in to say he had lost the rig on board his brand new Juan Kouyoumdjian-designed CORUM L’Épargne. He was racing in seventh place at the time, a few miles to leeward of Louis Burton’s Bureau Vallée 2.

The 46-year-old Troussel, who led in the early stages of the race, was reported to be uninjured and was securing his boat prior to – almost certainly – diverting to the nearby Cape Verde Islands which were about 260 nautical miles southeast of him.

This is a big loss to the race and a huge disappointment to a much-fancied team led by the former two-time Solitaire du Figaro winner who was sailing one of only two “Juan K” boats in the fleet (the other being Sébastien Simon’s ARKEA PAPREC in 13th position) and whose campaign is project-managed by Greg Evrard with Michel Desjoyeaux who built the boat in Port-La-Forêt.

Just a few hours before the rig came down, Troussel reported that he was enduring uncomfortable conditions as he sailed with a single reef and gennaker on a southerly heading towards the Doldrums.

“It is a speed course towards the Doldrums with no manoeuvres but it is not very comfortable as it slams, but it is OK,”he said. “There is not really a lot of sea. We are foiling and it is fast and you have to pay attention. It is not easy to do anything really, not easy to sleep to get in the bunk. I have an energy problem, I broke a hydrogenator and we don’t have a solution for the moment.”

Up ahead, Alex Thomson on HUGO BOSS continues to set a punishing pace and is gradually increasing his advantage over Jean le Cam on Yes We Cam!. He is still holding onto second place and may yet get to the Doldrums – about 600 miles south of leaders – ahead of Thomas Ruyant on LinkedOut in third place who has been cutting his deficit on Thomson over the last few hours.

Behind the leading trio, Charlie Dalin on APIVIA and Kevin Escoffier on PRB are both about 176 miles off the lead but with Dalin about 70 miles to leeward of Escoffier.

At the moment the route into the Doldrums looks reasonably straightforward but as this week progresses, a large area of light winds begins to spread across the course from the West African coast. This will force the chasing boats to head further west and sail more miles before they reach the southeast trades.

At the back of the fleet, Fabrice Amadeo continues to make up ground after re-starting. This morning Newrest-Art et Fenêtres is approaching the remnants of Tropical Storm Theta, 350 miles east of São Miguel, and is only 220 miles north of Sébastien Destremau’s Merci, the backmarker.

At some point today Jérémie Beyou and his team will make their decision about whether or not he will re-start the race on board Charal, with just two days left until the Vendée Globe startline officially closes off Les Sables d’Olonne.