UN Secretary-General: “Ending the ocean emergency is a race we must win” 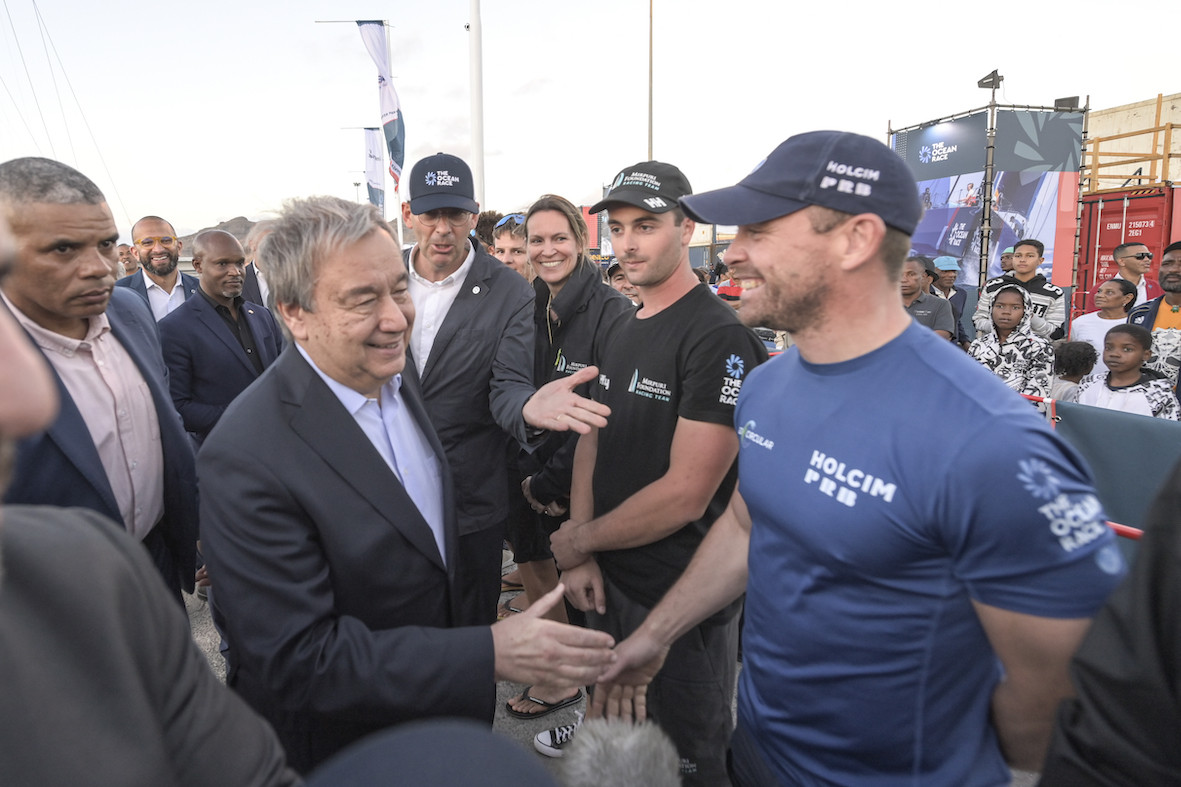 At The Ocean Race Summit Mindelo, the UN chief added: “Working as one, it is a race we can win”

Ending the ocean emergency is a race we must win, and working as one, it is a race we can win' - this was the powerful message from United Nations Secretary-General António Guterres at The Ocean Race Summit Mindelo, held in Cabo Verde, earlier today.

Opening the event, he said: “We gather on the shores of the mighty Atlantic Ocean today to celebrate something special - the inspiring courage of women and men sailing this gruelling six-month around the world race. It is also inspiring to know that every boat is carrying special equipment to gather scientific data to help ensure a healthy ocean for the future."

Speaking to over 300 attendees gathered at the Ocean Science Centre Mindelo (OSCM), a joint facility of the GEOMAR Helmholtz Centre for Ocean Research Kiel, Germany, and the IMar - Instituto do Mar - Guterres spoke of the major issues affecting the ocean, including overfishing, plastic pollution, the destruction of marine habitats and the impact of climate change, and urged the international community to become “the champions the ocean needs.”

“Let’s end the ocean emergency and preserve this precious blue gift for our children and grandchildren,” he said.

Guterres welcomed commitments made at high-level conferences over the last 12 months. “But the race is far from over. We need to make 2023 a year of super action so we can end the ocean emergency once and for all,” he said, stressing the need to effectively implement the many legal and policy instruments related to the ocean, such as the United Nations Convention on the Law of the Sea.

“The ocean supports the air we breathe, the food we consume, the cultures and identities that define us, the jobs and prosperity that sustain us, the regulation of weather and climate, and billions of animals, plants and microorganisms that call the ocean home. The ocean is life and livelihoods, and it is in trouble," Guterres said in his remarks. “Humanity has been waging a senseless and self-defeating war on nature. The ocean is on the front lines of the battle.”

The UN chief underlined that around 35 percent of global fish stocks are over-exploited, global heating is pushing ocean temperatures to new heights, fueling more frequent and intense storms, rising sea levels, and the salinization of coastal lands and aquifers. “Once rich coral habitats are being bleached to oblivion. Mangrove forests are being destroyed, taking the species they host with them,”he said.

“Meanwhile, toxic chemicals and millions of tons of plastic waste are flooding into coastal ecosystems - killing or injuring fish, sea turtles, seabirds and marine mammals, making their way into the food chain and ultimately being consumed by us.”

The UN Secretary-General stressed the need for action in four fundamental ways:

First, ending the ocean emergency requires sustainable maritime industries, he said. “This means smart, sustainable fishing practices - including aquaculture - to guarantee a strong seafood industry into the future; carefully managing and regulating development and resource extraction with precaution, protection and conservation at the core of all activities."

Guterres noted this also means the reduction and prevention of marine pollution from both land and sea-based sources, as well as public and private partners jointly investing in restoring and conserving coastal ecosystems, such as mangroves, wetlands and coral reefs.

Second, the UN chief said, “ending the ocean emergency means delivering massive support for developing countries living with the first and worst impacts of the degradation of our climate and ocean.”

“I will continue urging leaders and international financial institutions to join forces and develop creative ways to ensure that developing countries can access debt relief and concessional finance when they need it most.”

"I will keep pressing", he said, "for an SDG Stimulus Package to help governments of the Global South invest in the systems that support development and resilience. And I will always stand with developing countries as they protect and restore their ecosystems following decades and centuries of degradation and loss."

Third, he said, "ending the ocean emergency means winning the race against a changing climate. At a time when we must reduce greenhouse emissions to secure our future on this planet, we are on the verge of crossing the 1.5 degree limit that a livable future requires. Now is the time to deliver real action on climate: deliver on the establishment of the loss and damage fund that the world committed to at Sharm El-Sheikh, deliver the $100 billion commitment, deliver on the promise to double adaptation finance and deliver on closing the emissions gap, phasing out coal, and accelerating the renewable energy revolution.

“Together with international financial institutions and the private sector, developed countries must provide financial and technical assistance to help major emerging economies transition to renewable energy."

In his remarks, the UN Secretary General commended The Ocean Race for its efforts “in limiting the carbon footprint throughout the race” and encouraged the competition to continue operating responsibly.

“The Ocean Race family is truly humbled by the encouragement from the UN General Secretary Guterres, highlighting the work we do and acknowledging The Ocean Race’s efforts to drive ocean protection and limit our carbon footprint. The Secretary-General has raised a very clear warning for the ocean. We have a perfect storm around us and we have to be ready to brace. Today has been an opportunity to change course for the benefit of the Ocean, and we need all hands on deck to do it.” said Richard Brisius, Race Chairman, The Ocean Race.

The UN chief concluded his call to action by stressing that ending the ocean emergency means deploying science, technology and innovation on an unprecedented scale.

Guterres noted that we are now into the third year of the UN Decade of Ocean Science. “By 2030, we must have achieved our goal of mapping 80 percent of the seabed. We must see new partnerships among researchers, governments and the private sector to support ocean research and sustainable ocean planning and management. We must invest in state-of-the art, climate-resilient coastal infrastructure - from towns and villages to port installations.”

The Ocean Race - the round-the-world sailing event known as the toughest test of a team in sport - holds these high-level Summits to promote ocean action in some of the stopover cities that will be hosting the teams as they circumnavigate the planet.

The Ocean Race Summits are a key part of The Ocean Race’s multi-award winning ‘Racing with Purpose’ sustainability programme, which brings together a range of tangible ways that the event can have a positive impact on the marine environment. Working with 11th Hour Racing - the Founding Partner of the Racing with Purpose programme and a Premier Partner of The Ocean Race, The Ocean Race is holding these meetings to drive global decision-makers to create policies to protect and govern the ocean, contributing vital data about the state of the seas to leading scientific organisations, equipping children with the knowledge to help the ocean and much more.

The Race started from Alicante, Spain, on 15 January 2023 and will end in Genova, Italy in June 2023. It consists of seven legs with stopovers in eight cities around the world: Mindelo, Cabo Verde; Cape Town, South Africa; Itajaí, Brazil; Newport, Rhode Island, USA; Aarhus, Denmark; and The Hague, The Netherlands.

In previous editions The Ocean Race fleet has often passed close by – or even through the middle – of the African island nation. In the 2022- 23 edition, however, for the first time ever the fleet has stopped in Cabo Verde at the end of the 1,900 nautical mile opening leg from Alicante, Spain. This makes the Cabo Verde Republic the first ever West African nation in the race’s history to host a stopover.

RELAY4NATURE
At the event, Relay4Nature, an initiative by The Ocean Race and UN Secretary-General's Special Envoy for the Ocean, Peter Thomson, which involves Nature’s Baton passing between teams and global leaders, was handed to the UN Secretary-General. Team Malizia received Nature’s Baton at the Race start in Alicante and skipper Boris Herrmann delivered it to Secretary-General Guterres in Cabo Verde at the end of Leg 1 of The Ocean Race. Connecting the world´s key environmental events, Relay4Nature champions the ocean and calls on leaders to take urgent action to protect nature.