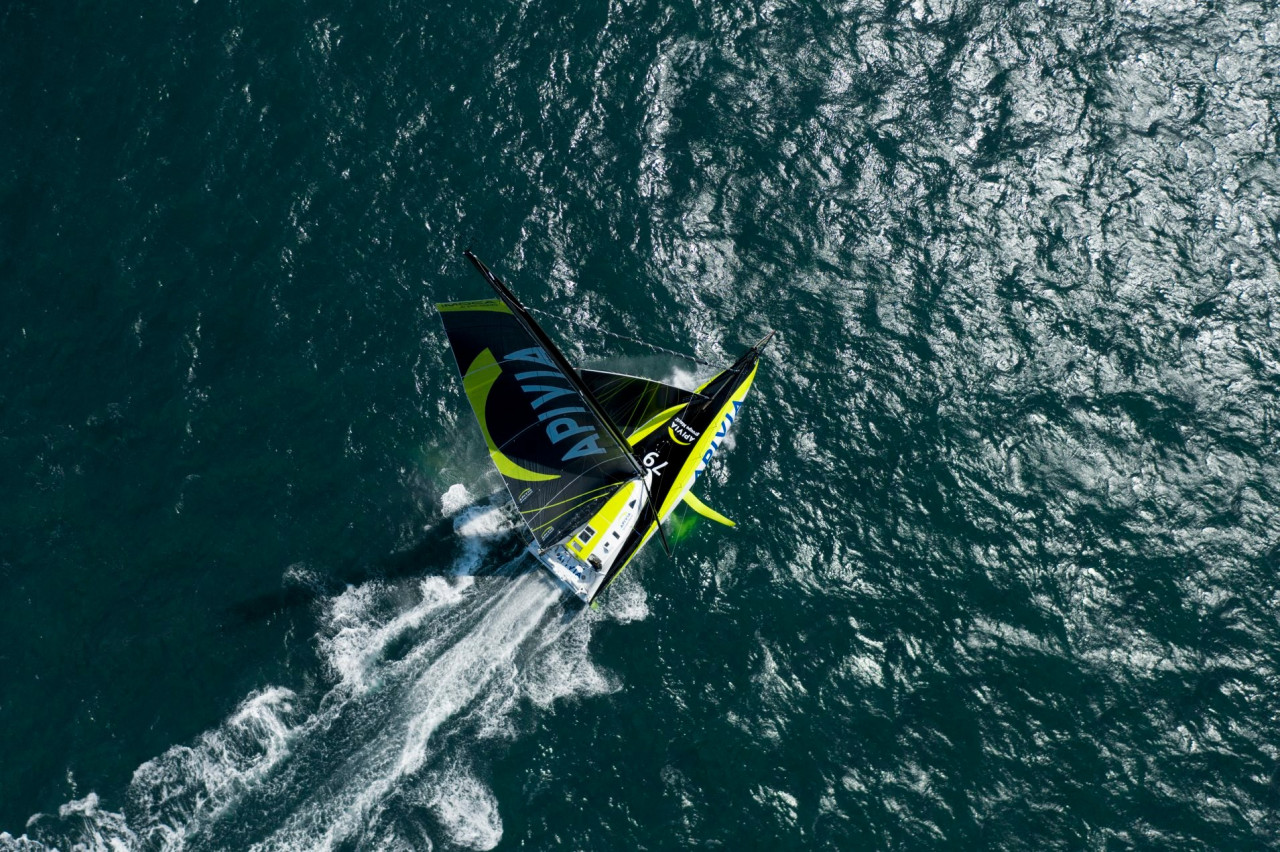 After Jérémie Beyou’s Charal, the first new generation monohull launched a year ago, things sped up this summer with the launch of no fewer than five new IMOCAs in just over six weeks. In all, eight brand new IMOCAs will have been built for the 2020 Vendée Globe, confirming the commanding success of a thriving IMOCA class.

Over the past month and a half, on average one brand new IMOCA was launched each week. In chronological order, Sébastien Simon’s Arkea-Paprec on 20th July; Alex Thomson’s Hugo Boss on 4th August; Charlie Dalin’s Apivia on 5th August and Kojiro Shiraishi’s DMG Mori on 2nd September. On Saturday 6th September, it will be Thomas Ruyant’s turn to unveil his new Advens for cybersecurity. Two other brand new IMOCAs are also currently being built, Corum l'Epargne for Nicolas Troussel and L’Occitane for Armel Tripon.

Sébastien Simon (Arkea-Paprec): “Confident we have made the right choices”

Sébastien Simon’s team was the first to leap into action this summer, launching the new Arkea-Paprec (designed by Kouyoumdjian) on 20th July. Since then, the boat has been out sailing regularly and in particular took part in the Rolex Fastnet Race (retired due to a short circuit), which was followed by a training course at the Finistère Ocean Racing training centre. During this course, Sébastien Simon and Vincent Riou were able to see how they measured up against two other new generation foilers, Charal and Apivia. “It’s hard to draw any conclusions from this training, as the weather conditions were very tricky,” explained Sébastien. “But we did manage to see that the boat has a lot of potential. We are confident we have made the right choices, even if we know there is still a lot of work to do, in particular in calibrating the electronics. We can make a lot of progress still and are looking ahead to making changes. In terms of the mechanical aspects, these boats are very complicated and setting them up right takes a lot of time. We hope to get 100% of her potential by the start of the Transat Jacques Vabre.” How does Sébastien Simon see his IMOCA in comparison with his rivals? “The hull that is closest to ours, which is powerful and straight is Apivia. The shape of Charal and Hugo Boss is completely different, as they are rounder and with a larger rocker. Each of us has our own type of foil. We’ll see in a few months from now what that may mean in terms of performance.” 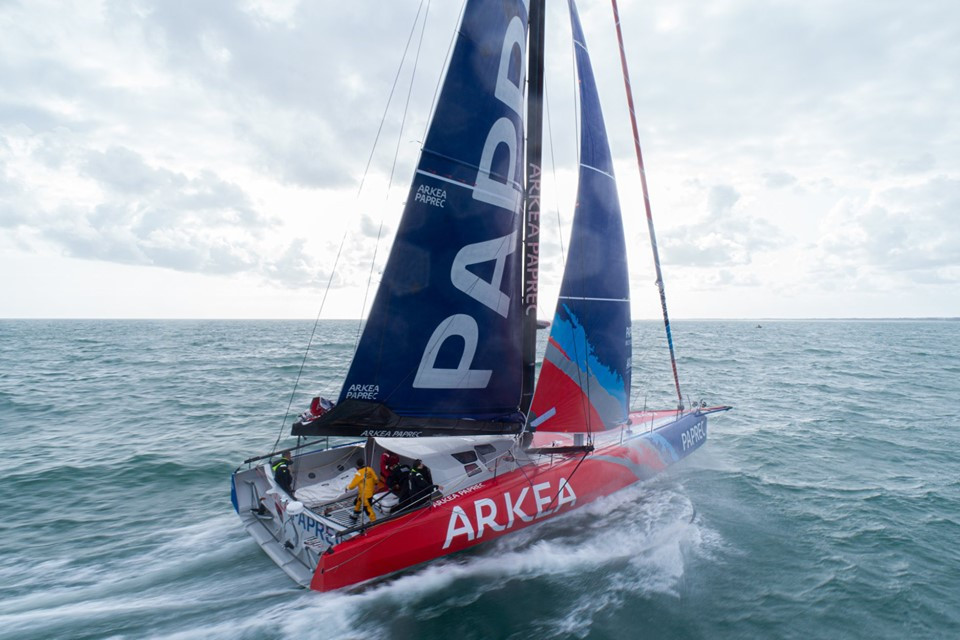 A trained naval architect, Charlie Dalin was keen to follow each phase of the design and construction of his Apivia (designed by Verdier). “I was heavily involved in all of the choices. I know all her characteristics down to the smallest detail. I have had this boat in mind for a long time, so that even before she was launched, I felt I knew her well,” he said. “We haven’t yet been out ten times on her, but everything seems to be working well. Apivia seems to be a well-built boat. They’ve done a fine job and I’m very pleased with the systems we have chosen, her ease of handling and in particular the closed off protective cover.” Accompanied by his co-skipper, Yann Eliès, Charlie Dalin took advantage of the training session at the Finistère centre to carry out his first speed tests, keeping a watchful eye on Charal and Arkea-Paprec of course.

“Taking into account that she has only just been launched, we’re not doing too badly. People have been talking a lot about hulls and foils, but we must not forget the “engine” on these boats, by which I mean the sails. I’m very pleased and for a first set, the sails are interesting,” said a content Charlie, before adding a word of caution. “It is still too early to make anyconclusions. We haven’t yet sailed in a wide enough range of conditions to do that. The first real test will be the Transat Jacques Vabre. After that race, which is a bit like the start of the Vendée Globe, we’ll see things more clearly and be able to say how we measure up against the others.” 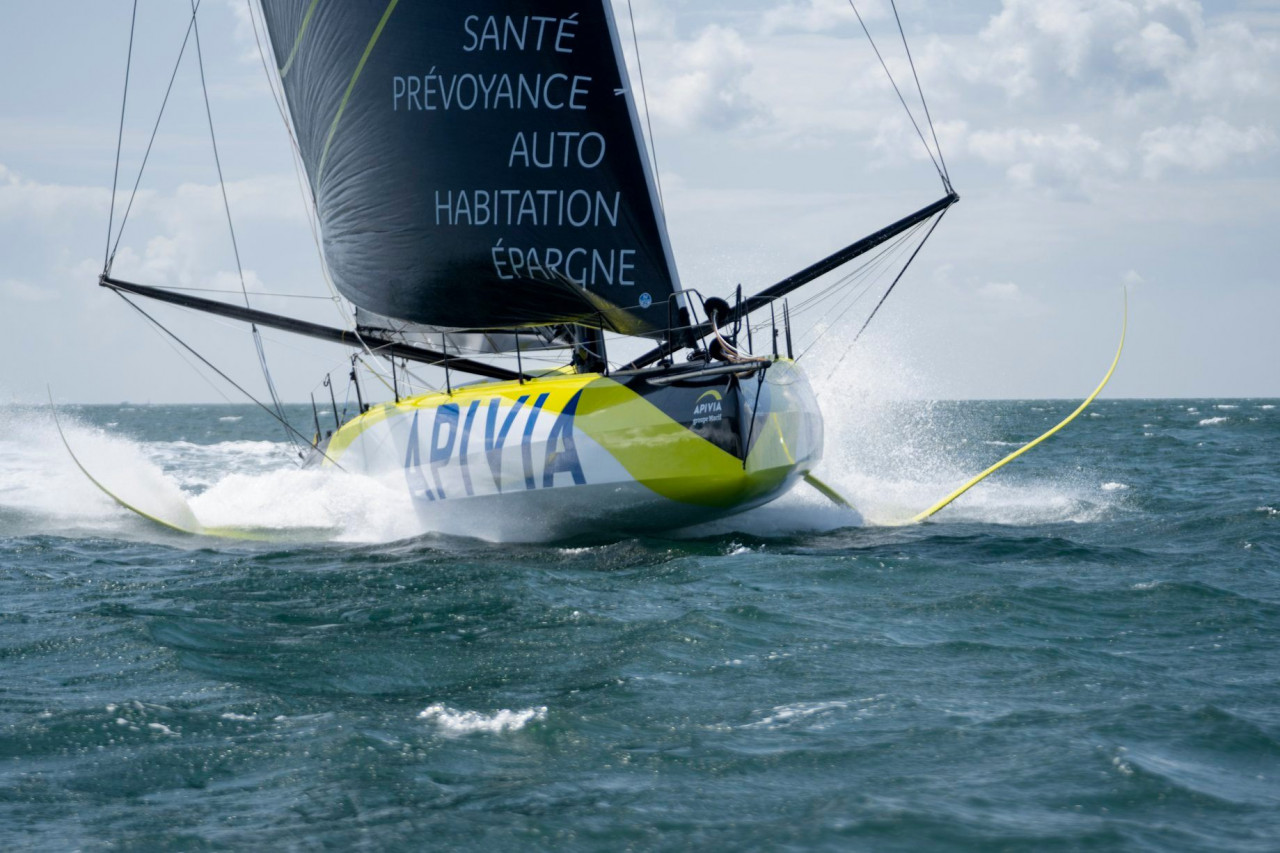 Living up to his reputation, Alex Thomson impressed everyone in early August when he presented his new IMOCA in the colours of Hugo Boss (designed by VPLP). “We have innovated and pushed back the limits. We’re not afraid of doing things differently. We may not always get it right, but we acknowledge that. But we’re not afraid of exploring things that haven’t been done before,” declared the Britishskipper, who is waiting for the Transat Jacques Vabre to do battle against the other new generation IMOCAs. Alex’s rocket stands out with her cockpit, which is completely closed, offering better protection while allowing him to see clearly what is happening at the front of the boat. As the cockpit is built into the hull, the centre of gravity has been lowered, as have the boom and sails, which means improvements in terms of aerodynamics.

Alex Thomson is also doing things differently with his foils. They are huge and curved and unlike anything seen on an IMOCA before. “Alex was bound to have the biggest foils in the fleet,” smiled Sébastien Simon. “We too thought of thatoption with a constant curve, but in the end we didn’t go down that road, as we didn’t think it would be the most efficient. We’ll see who was right.” 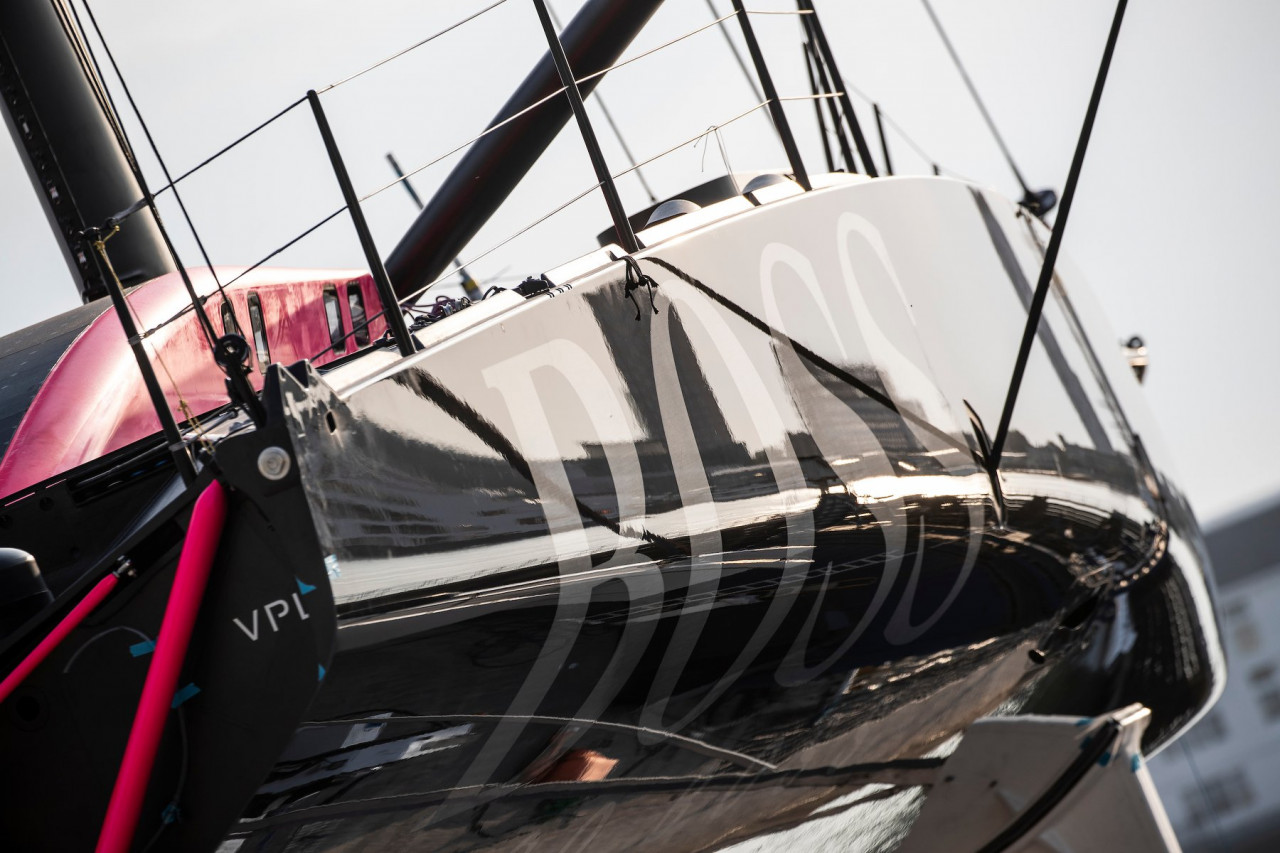 Kojiro Shiraishi (DMG Mori): “See what I am capable of achieving”

Launched very recently (on 2ndSeptember), DMG Mori, Kojiro Shiraishi’s new IMOCA was designed by VPLP and built using the moulds from Charal. “I have been dreaming of a new boat for thirty years,” said the Japanese skipper. “I was unable to complete the 2016-2017 Vendée Globe after dismasting, but I found a new sponsor, who agreed to build a brand new IMOCA.” While waiting for his new boat to be launched, he was able to try out a foiler, thanks to training sessions in Cascais aboard Yannick Bestaven’s Maître CoQ under the leadership of Roland Jourdain.

After the naming ceremony for DMG Mori, planned for 11th September in Lorient, Kojiro Shiraishi and his team will be able to carry out their first trips and start work on setting up the boat. The Japanese sailor will be competing in the Transat Jacques Vabre, with a co-skipper at his side, whose name has not yet been announced. “I can’t wait to race against the other competitors to see what I am capable of achieving, in particular against the other new IMOCAs, which seem to be excellent,” added Kojiro. 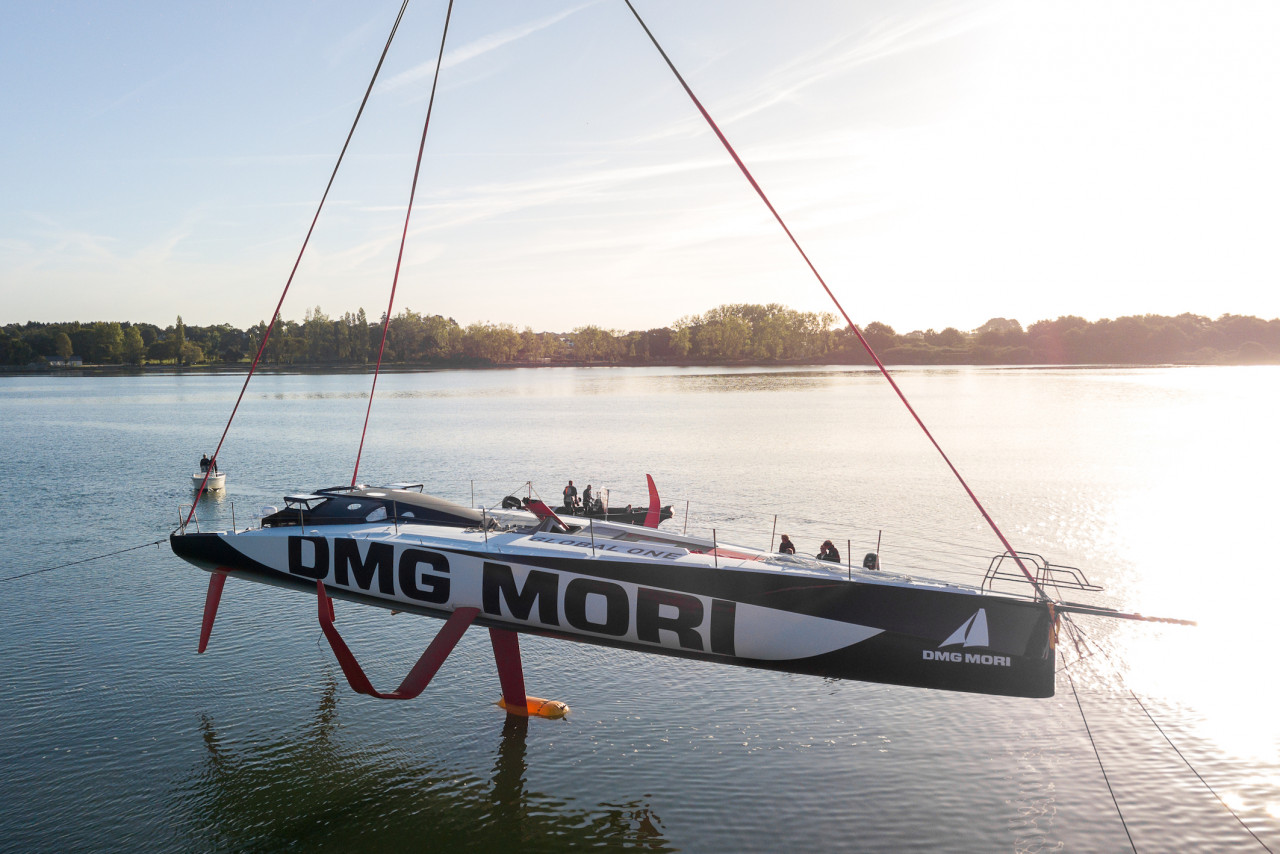 Thomas Ruyant (Advens for cybersecurity): “We have been pushing the architects to their limits”

The final boat to be launched this summer will be Thomas Ruyant’s IMOCA (designed by Verdier), which is due to come out of the yard on Saturday. “We remain fully focused on the finishing touches to our boat, but of course, we have been watching the other IMOCAs that have recently been launched. We have already seen that they are very fast and that the sailors in charge of them are in good shape,” explained Thomas. “It’s interesting, because the newIMOCAs have been designed by various architects. They have been pushed to the limits. It’s fantastic to be part of this with what should be a great boat. The IMOCA to which we are the closest is Apivia, as she was designed by the same architect and using the same basic designs.”

According to Thomas Ruyant, “Each boat will have their own preferred range of use.” The skipper from Northern France added: “We have all gone for different choices, in particular in terms of ease of handling depending on our own experiences. With the team, I went for a good all-round boat, which is reliable, robust and "easy" to sail. We have also done a lot of work on the sails. We have gone for some very different choices in that area…” 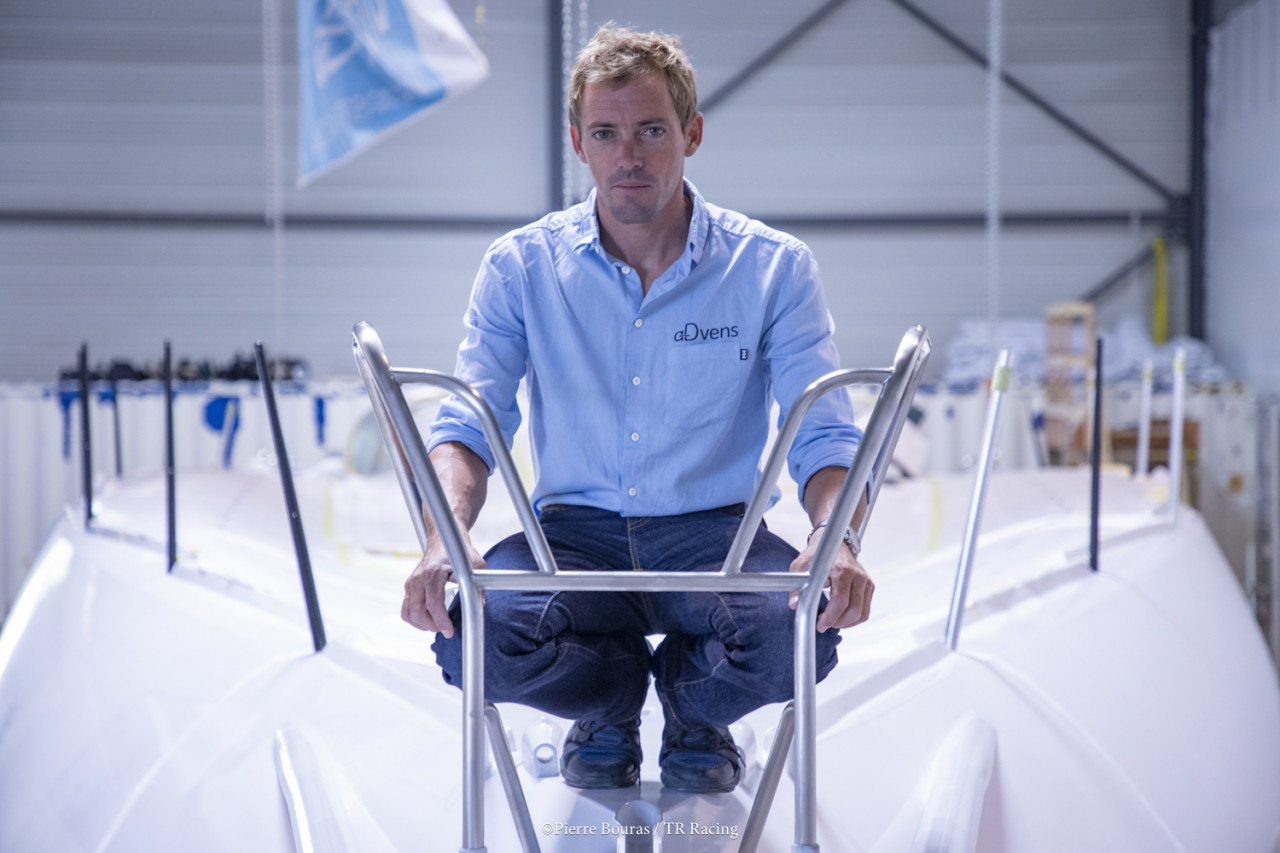 Timetable for the launches of the 8 new generation IMOCAs