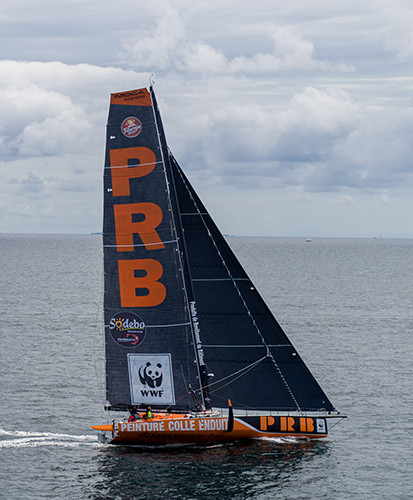 The fifth PRB, she is the sistership to the first VPLP-Verdier designs. Built from the same mould as Safran, this IMOCA was even lighter on her launch in October 2009 and finished 5th in the Route du Rhum 2010.

Skipper Vincent Riou went on to win the Fastnet Race 2011 aboard her and then had to retire from the Transat Jacques Vabre (with Hugues Destremau) following cracking in a watertight bulkhead. Her performance in the Vendée Globe was not dazzling either since the monohull hit a metal buoy offshore of Brazil whilst the solo sailor was in the top trio! 2013 would see victory go to PRB (with Jean Le Cam) during the Transat Jacques Vabre, a success story repeated two years down the line (with Sébastien Col). In the meantime, the boat underwent a makeover, however the Route du Rhum course did not suit her and she had to pull into Port-la-Forêt. 2nd in The Transat 2016, Vincent Riou secured 5th place in the New York-Vendée, but had to retire from the Vendée Globe after colliding with a UFO in the South Atlantic. The monohull got a boost in 2018 with foils designed by Juan Kouyoumdjian taking her to 4th place in the Route du Rhum, prior to a passage in the colours of Arkéa-Paprec in 2019 to win the Bermudes 1000 Race with Seb Simon as skipper. The latter passed on the batten to Kevin Escoffier who finished 2nd in the Transat Jacques Vabre with Nicolas Lunven.

After the unprecedented interruption of the IMOCA racing season because of the Covid-19 pandemic, the action on the water is finally about to start with the innovative new ‘Arctique’ race. (Start 4th of July, 3.30pm CET)

PRB relaunched in the colours of Arkéa-Paprec: Sébastien Simon in the transition phase of the handov…

Things are starting to move for Sébastien Simon. On Tuesday 26th February, the IMOCA, PRB, was relaunched displaying the colours of her sponsors, Arkéa and Paprec...