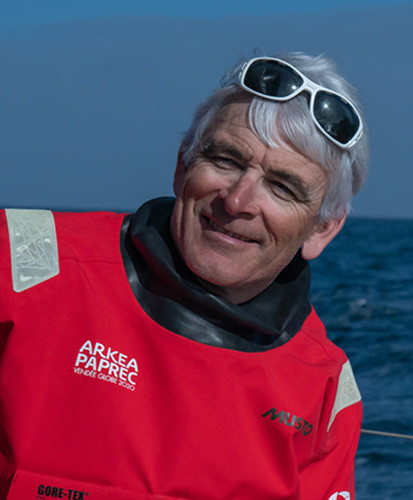 If we had to sum him up in just a few words, Vincent Riou could be called the top all-rounder. He is a sailor, who knows how to do everything: designing, developing and fine-tuning boats, an excellent weather analyst, but also a top class technician and a determined and talented racer.

The Swiss army knife of Breton sailing, if you like.

From his childhood in Loctudy – a small village in SW Brittany, where he still lives with his wife and children, Vincent Riou has inherited a keen passion for the sea. It is on the water that “Vincent the terrible” is happiest, doing battle with anything that floats from the dinghies of his childhood to multihulls and not forgetting the Figaro racers and the big IMOCAs.

In 2000, he prepared the winning boat for Michel Desjoyeaux. Four years later, the Vendée based firm PRB offered him the helm on the advice of the Professor. Vincent had a remarkable performance ending up as winner, even though unusually he wasn’t in the lead at Cape Horn. The one that was just in front of him at the rock and who missed out on winning was Jean Le Cam… It was King Jean than gave Vincent his nickname. A link that was to continue as in the 2008 edition, Jean capsized at the Horn and who would rescue him in these hellish conditions? Vincent, of course! The Race Jury awarded him equal third place after this epic rescue. To finish the story, the two men would go on to sail together in the 2013 Transat Jacques Vabre… that they would win. Deeply involved in the IMOCA class (which organises the rules for the Vendée Globe boats), Vincent will be the only previous winner competing. He isn’t in it just for fun, but hopes to follow in the footsteps of Desjoyeaux by becoming a two time winner of the Vendée Globe a feat solely achieved by Mich Desj’. For the moment.

Meet the sailors who want to bring their French Touch into the next edition of The Ocean Race...

On Saturday 3rd August, 21 double-handed crews will set sail from Cowes (Isle of Wight) aboard IMOCAs for the start of the 48th Rolex Fastnet Race, an ocean racing classic which sees hundreds of boats competing every oth…

2019: an unprecedented boom for the IMOCA class

The IMOCA class has never experienced such enthusiasm and as 2019 gets underway, it looks like being a very exciting year. At least six new generation IMOCAs will be launched in 2019 and more than thirty boats will be ra…