Back from the Transat... 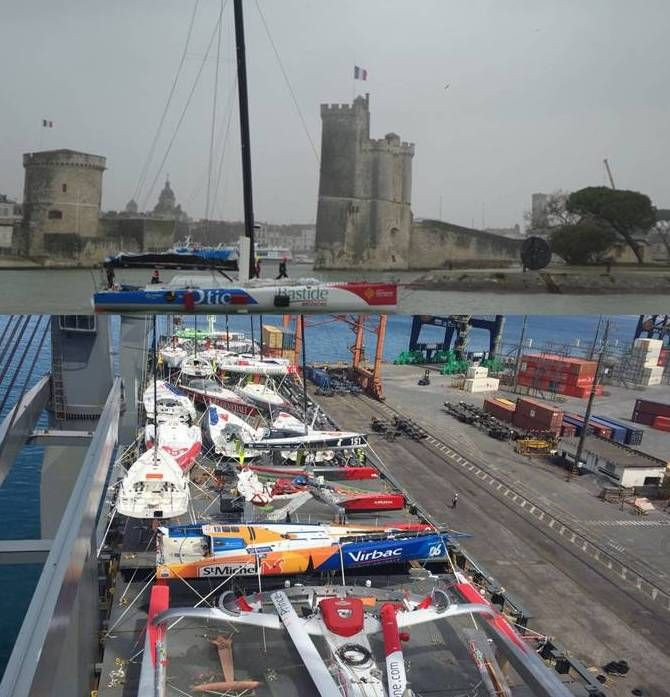 After they all completed the Transat Jacques Vabre between Le Havre and Salvador da Bahia, the 13 IMOCAs that took part began heading home, some on cargo ships, while others returned under sail.

After they all completed the Transat Jacques Vabre between Le Havre and Salvador da Bahia, the 13 IMOCAs that took part began heading home, some on cargo ships, while others returned under sail. This second option, which is less expensive, enabled some skippers and their teams to do some more sailing and gain from the experience. Over the past few days, news of the IMOCA class has focused on the press conference for the next Barcelona World Race, at which some important announcements were made.

After taking advantage for a while of the atmosphere in Salvador da Bahia, the IMOCA skippers and their teams organised the return trip for their monohulls to get them back to France. Out of the thirteen boats that took part in the Transat Jacques Vabre, seven are returning on a cargo vessel, the Kingfisher, which set sail on Friday 15th December and is due to arrive in Lorient on 28th December. Aboard this ship we can see StMichel-Virbac, SMA, Malizia II, Bureau Vallée 2, Initiatives-Cœur, Generali and Vivo A Beira.

Others chose to sail home. That was the case for Manuel Cousin, the new owner of the Farr-designed boat from 2007, aboard which he competed in the Transat with Arnaud Boissières. With some members of his team, he completed his return voyage and moored his IMOCA up in Les Sables d’Olonne. Kito de Pavant is also back after sailing his Bastide-Otio to La Rochelle, where she will remain in the hands of Yannick Bestaven. Skippered by Roland Jourdain and a few members of the Kaïros team, Des Voiles Et Vous has also arrived back in her home port of Concarneau in Brittany. As for Newrest-Brioche Pasquier, Fabrice Amedeo’s former IMOCA, she is now in Port-la-Forêt. Romain Attanasio, her new skipper, can start to get to grips with her. Two other IMOCAs are currently on their way home, La Fabrique and Famille Mary-Etamine du Lys.

A new format for the Barcelona

While the voyage home from the Transat Jacques Vabre was being organised, those involved in the IMOCA class are already thinking about the next big races, of which the 2019 Barcelona World Race will be one of the most important (start on 12th January 2019). For the fourth edition, the double-handed round the world race has come up with a new format, the main features of which were presented on Wednesday at a presentation at the Fundació Navegació Oceànica Barcelona (FNOB). For the first time, after leaving Spain there will be a stopover in Australia, meaning there will be two legs, Barcelona-Sydney and Sydney-Barcelona, with the possibility of changing co-skippers. This stopover in Australia will allow the race to become more international, which is always very interesting for the class and the sailors involved.

“For us, it will be a success if we get ten or eleven boats on the start line for the next edition,” explained Xosé-Carlos Fernández, general director of the FNOB. Sailors like Alex Thomson, Arnaud Boissières, Samantha Davies, Kito de Pavant and Alan Roura have already expressed their interest in taking part in the next race. The race director, Jacques Caraës pointed out how important this race is in the IMOCA calendar: “The Barcelona World Race will have a weighting of 9 in the Globe Series, the IMOCA world championship. One of the legs will be a qualifier for the 2020 Vendée Globe. We have done our utmost to ensure as many teams as possible complete the race. One pit stop per leg will also be allowed, each lasting a minimum of 48 hours.”

We raise out hats to François Gabart

Finally, we could not finish this article without mentioning the incredible result obtained by François Gabart, a former member of the IMOCA class, who won the 2012-2013 Vendée Globe. Aboard his maxi-trimaran, Macif, François shattered the solo round the world record on Sunday 17thDecember with an unbelievable time: 42 days, 16 hours, 40 minutes and 35 seconds. Congratulations, François.

24.01World first hydrogen IMOCA yacht construction announced by Phil Sharp and OceansLab…Phil Sharp, one of Britain’s most competitive and successful ocean racers, has today announced the build of a new zero emission IMOCA ahead of the 2024 Vendée Globe.…23.01Foot injury prevents Boris Herrmann from Participating in Leg 2, Yann Eliès to replace him…Famous French sailor Yann Eliès will be sailing aboard Malizia - Seaexplorer during the second leg of the round-the-world race, as Boris Herrmann sustained a foot injury during Leg 1. Briton Will Harris will take over the role of skipper for this part of the race.…22.01GUYOT environnement - Team Europe: Focus on the next leg…When GUYOT environnement - Team Europe still had almost 300 nautical miles to go to the finish of the first leg of The Ocean Race, the race at the top was already over with the arrival in Mindelo on Cape Verde.…18.01Canada Ocean Racing finish the Royal Ocean Racing Club Transatlantic Race.…Racing double-handed, skippers Scott Shawyer and Alan Roberts finish the first race in Canada Ocean Racing history. Finishing with a time of 9 days 12 hours 57 minutes 53 seconds places the duo as 2nd in IRC super zero & Monohull Line honors.…17.01Welcom on board HOLCIM-PRB!…The Onboard Reporter of HOLCIM-PRB, Julien Champolion, takes you to the heart of the first hours of particularly tough races in Gibraltar.…03.01Boris Herrmann relaunches Malizia -Seaexplorer with new foils…New year, new foils, new round-the-world challenge: we have relaunched our Malizia – Seaexplorer IMOCA yacht after an intense three-week refit. In that short period of time, the technical team was confronted with major challenges and, pulling off a tremendous effort, managed to turn the situation around to finish the boat in time for The Ocean Race.…
All news and videos