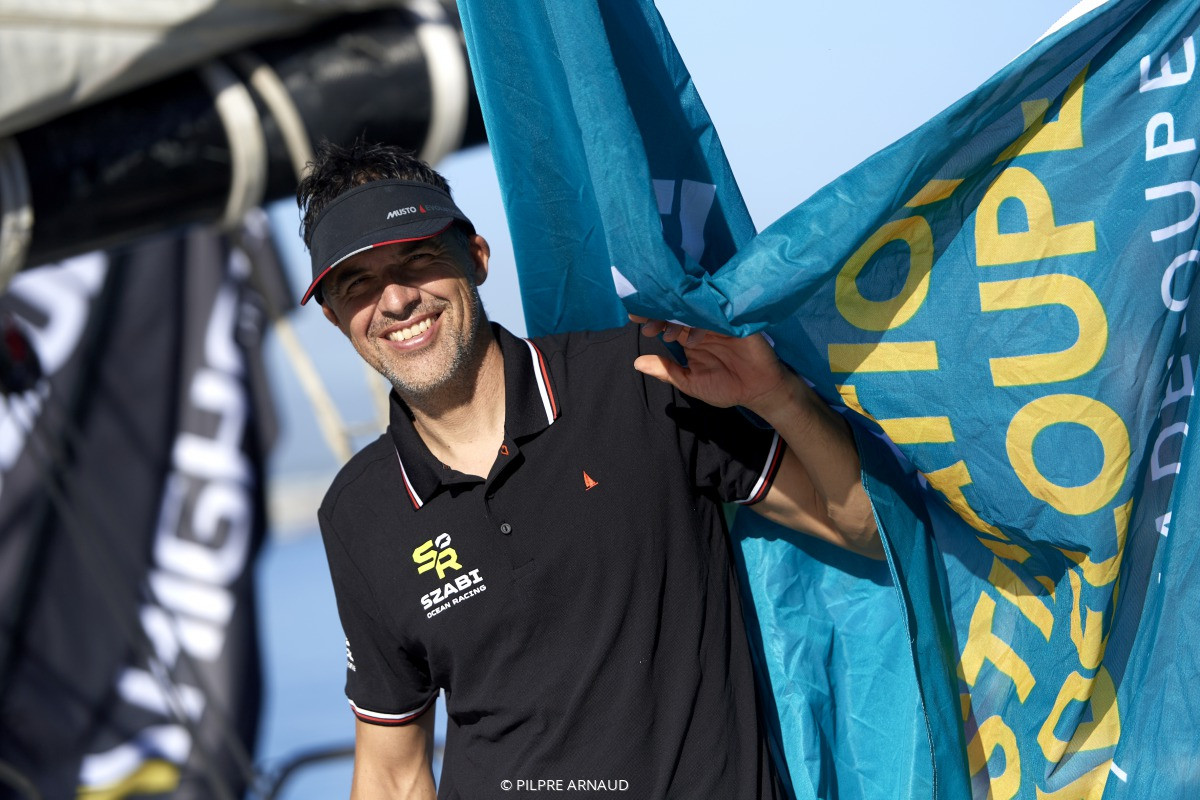 After two big disappointments, having to retire within the first 24 hours of early season IMOCA races Hungary’s Szabolcs ‘Szabi’ Weöres got his Vendée Globe campaign back on a good footing today when he crossed the finish line of the 12th Route du Rhum-Destination Guadeloupe in 26th position in the IMOCA Class.

Weores, 49, is a professional yacht rigger who grew up sailing and racing on his Lake Balaton. He already has multiple Transatlantic races under his belt on crewed boats and, indeed, a racing fully crewed circumnavigation. But, encouraged by Hungarian Vendée Globe racer Nandor Fa among others Sazabi has chosen to ‘think big’ and attempt the Vendée Globe. His boat is the Owen Clark design which was built for Dee Caffari's 2008-9 race and which complete that last race as Ari Huusela's Stark Imoca.

His biggest of the two major setbacks was having to return back to Les Sables d’Olonne during the first night of the Vendée Arctic, which should have been a Vendée Globe qualifier. A small pressure sensor switch on the keel hydraulics had failed and he could not cant the keel of his IMOCA which was formely Ari Huusela’s Stark IMOCA.

A summer refit ensured that Weeores has improved the reliability of his boat. Adding several thousands of training miles on the water in the summer means that the sailor, who is also an accomplished Ironman triathlete, now knows his boat very much better. The former 32nd America’s Cup rigger promised to prioritise getting to the finish line over and above a hard racing attack and today his prudence pays off….

After having to fight back tears, a forlorn figure on the Port Olona victory pontoon during what should have been the first full night of the Vendée Arctique, the contrast could not have more marked as Szabi jumped from his boat and swallowed his P’tit punch in one. And from being a total IMOCA rookie, never having sailed one in January when he picked up Ariel, his accomplishment is significant.

From agony to ecstasy

“It is a great feeling to be here. It is such an achievement for me to finish my first ever solo Transat race. It is special race, too, this Route du Rhum. It was hard for everyone and I found it hard. After the start getting out the Channel with that huge fleet, on an upwind leg, dealing with the marks and them on the North Atlantic passing through the fronts, getting the strong winds, there were tough conditions. I had a really good transition in the ridge, I was quite lucky. But to be honest in the trade winds I wanted to enjoy it, I was a bit slow but I was happy. The trade winds were a nice run but I was not improving my result.”

From IMOCA newbie to Rhum finisher

“I achieved my goal which was to qualify but I learned so much, just boat handling, working the instruments and steering it is all new to me in the IMOCA class. When I think that I just got the boat in January and I am here now, that is a fantastic feeling. There is so much to do, so much to learn. But this was a big step.”

Sting in the tale

“The hardest time was actually this morning. It was such a great feeling going behind the island, it was like being on the lake at home. I was feeling the changes of the breeze on my neck and I was helming looking for the nice shifts. But I knew that when I got out of the shadow of the island I would get the stronger breeze and I was prepared for that. I took one reef and had the J3 for perfect manoeuvrability and then it was great. I had a good position and the wind suddenly died. I thought I had to put some more sails out and so unrolled the J2 and the wind came back suddenly. I was bearing away as I had to furl and I got it wrong. My mind was somewhere else. I got an overwind on the jib and it caught and everything was flapping, everything was banging and I thought I was going to break the forestay and lose the mast in the last 20 miles. It was a big shit fight to get it all sorted. It is really a big reminder that these boats don’t allow you to make mistakes.