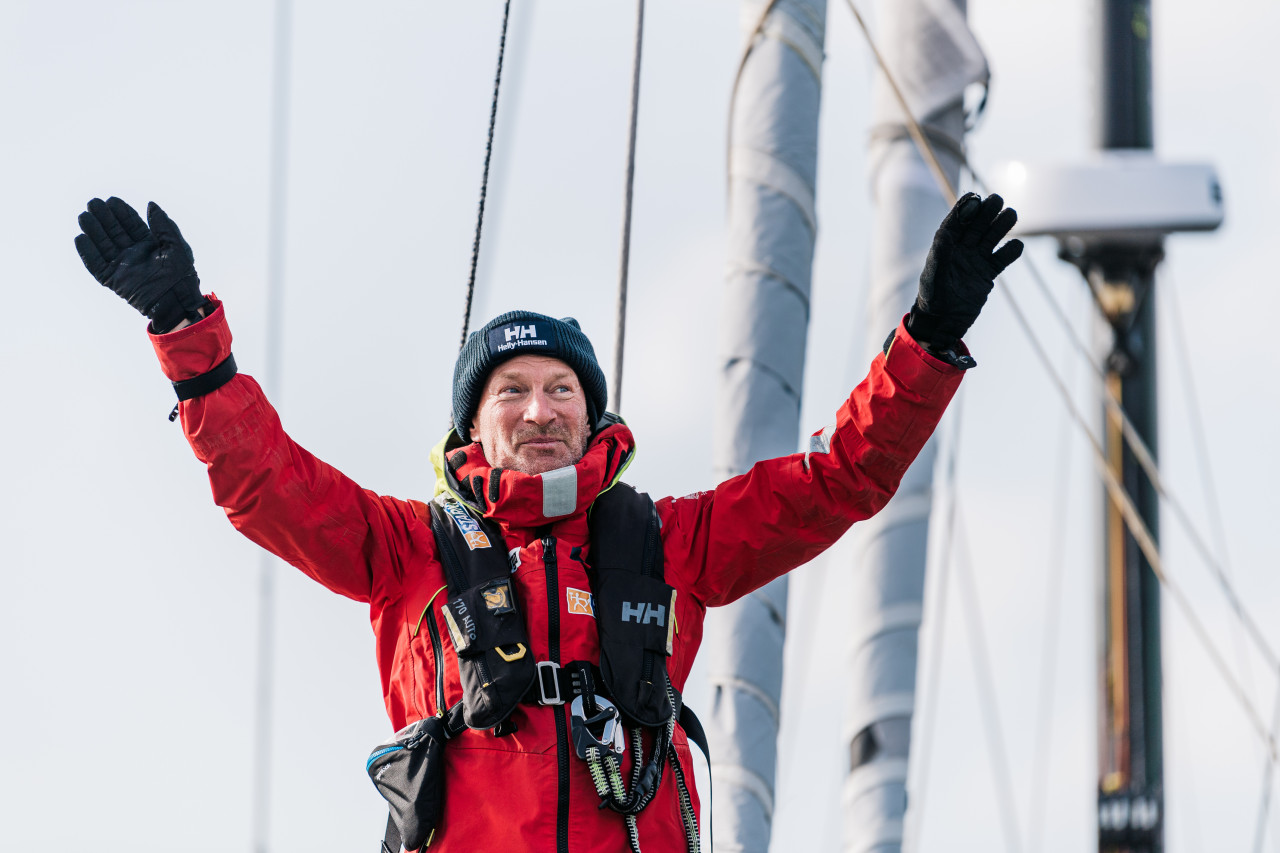 It is a big honour to close the course isn’t it?
It feels now like it is yes. To see the crowds on the channel when I came in felt really good. I did not imagine there could be so many people cheering me.

Getting to the start line is often the hardest, is that the case for you?
Yes, it was the case for me. It was really hard! 6 months before the start I did not have the main sponsor yet and we had the big keel change to do and no money for that. We were really close to shutting down the project but then in May we found our main sponsor and we were really busy getting organised.

90% of the time you said you were happy, tell us about your down moments?
The start of the race was really hard. The big front that we had to pass and after that front, I had a wipeout and mast on the water. It was a horrifying moment and fell from the upper side of the boat to the bottom side. I managed to save the boat, save the rig and continue sailing and a few days after that I woke up to a blackout on the boat, I had no electricity on board. Luckily we had the same situation one month earlier and I knew what to do and I had some spares and I could one by one recover those electrics and continue the race. It felt quite bad that in the first week you had a wipeout, almost lost the boat and then the electrics. You then wonder how you can survive around the world with these kind of things.

What stands out now when you look back at the race?
I just enjoyed staying there day by day with my basic routings. I felt good if the sea state wasn’t too bad and the weather conditions not too bad. I enjoyed it a lot. Maybe it was because I didn’t have any goal to win the race or be in a good position, I just wanted to finish and I had no pressure for that kind of things. I could enjoy the race that way

You are an amateur sailor, this is your hobby. What would your advice be to someone else coming in as an amateur?
First is to learn to speak and read French, it is a major thing! The second one is that you have to start with class Mini. That is a good path and a good way to start and you get known with the right people and get into this and it is much easier that way. And you have to be really good with the sponsors!

Give us a few words about the support of other skippers during the race?
It started a long time ago, at least five years ago with Alex and since then it has been continued with all the other skippers more or less. Before this race I spoke and met Alex a few times. I was scared to go to the Southern Ocean as it was my first experience and I did not know what to expect and I had heard horror stories. It was helpful to get advice from other skippers like Sam during hard time such as approaching cape Horn. It helped me a lot to hear their advice and to know that the other skippers are  struggling also so It wasn’t just me.

Before your first Vendee, you said you don’t understand other skippers coming back again and again?
After this I am even more amazed of skippers that come back! I understand, it is such an experience and challenge and race. But when I am an amateur and this is my hobby. If we do it a different way, instead of working two jobs at the same time then it is the only way it can be possible to do it again.

What was the most challenging technical problem?
It was the technical electronic situation with the electronic systems blacking out. I knew how to fix the thing and continue but that was quite scary. When you start you accept that you might have to abandon the race on anyday, even on the first night. But when you fight through all this way and get to the Bay of Biscay then it is hard to accept that you are out of the race. So then the pressure rises as you go through the race as you don’t want to abandon having got so far but it is always possible.

You earlier said that Stark is ready to go again, it is completely fixed and there is nothing wrong with it.
That is true! That was my goal. First goal was to start the race and the second was to finish with a boat that is in a good condition because I need to sell the boat. I made all what I can and could during the race to keep the boat in one piece and that is the case now. There is even enough food for two crew and diesel for that race and almost all the supplies and spare parts to go again.