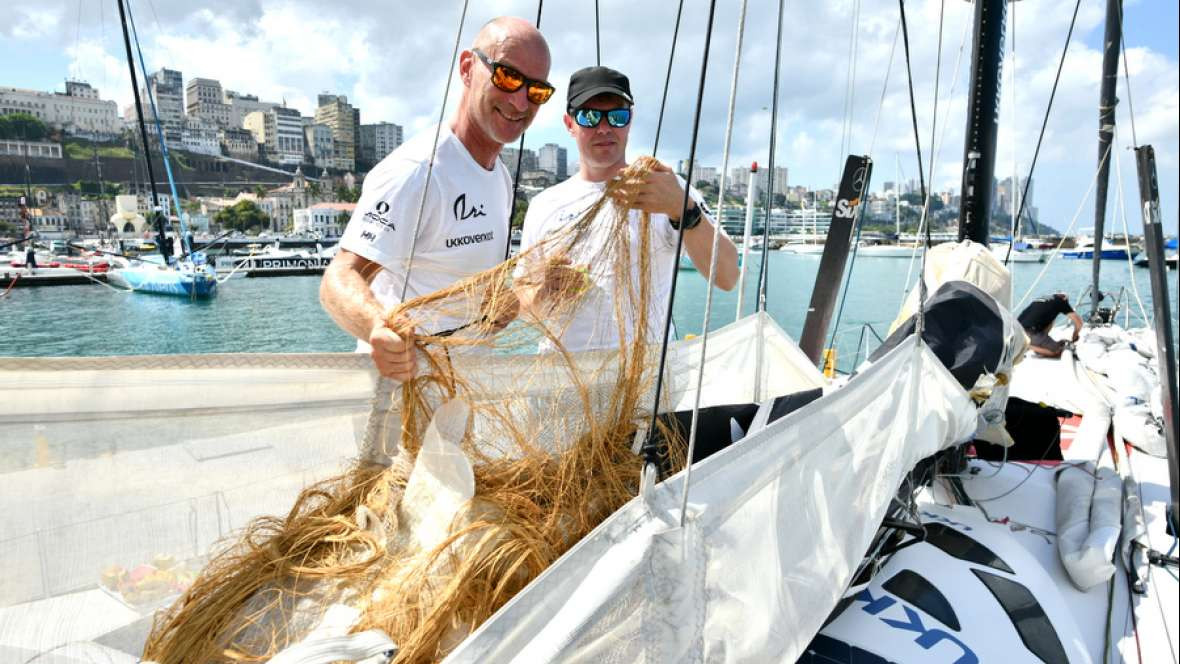 Ari Huusela became the first Finn and Scandinavian in an IMOCA to finish the Transat Jacques Vabre Normandie Le Havre on Friday as he and Irish co-skipper, Michael Ferguson, forced Ariel IIacross the finish line in the Bay of All Saints. There was no mistaking that it was them, because you could see Salvador through their mainsail.

“It feels great to be the first ever Scandinavian IMOCA sailor to finish the Transat Jacques Vabre, I’m proud of that,” Huusela said. “Hopefully someone else from Scandinavia can follow in my footsteps now I’ve shown that it’s possible, even if we’re a bit far away. The Baltic Sea is good training for this.”

On a tiny budget, Huusela was unable to buy a replacement mainsail and make a pit-stop en route as most other IMOCA teams in the race would, so he and Ferguson ploughed on.

The figures never tell the whole story of a race, but in this case they do not even come close. The official records will read:

Ari Huusela and Michael Ferguson, on their 60ft monohull, Ariel II, have finished twenty-sixth in the IMOCA class of the 14th edition of the Transat Jacques Vabre Normandie Le Havre after crossing the finish line in the Bay of All Saints in Salvador de Bahia, Brazil on Sunday, November 10, 2019 at 11:22:14 (UTC), 18 days, 23 hours 7 minutes and 14 seconds after leaving Le Havre, Normandy, France on Sunday, October 27 at 12:15 (UTC).

What they do not say is that from the first day of the race nearly three weeks ago, when they noticed a hole in the mainsail, it has been delaminating and unravelling.

“The mainsail went (on the first night) when we put a reef in off Guernsey and that’s when the first hole went in, we noticed it,” Ferguson said sieving the mainsail string in his hand. “It was a about the size of your fist. By the time we’d got to Ushant it was the size of a football and it got a lot worse from there.”

It took some of the edge off Huusela’s 57thbirthday celebrations on October 28.

The double-handed, biennial Transat Jacques Vabre Normandie Le Havre is the longest and toughest transatlantic race in the sailing calendar and it does not get much harder than the way Huusela and Ferguson did it.

“If you’d have told us two and a half weeks ago we’d be here, I’d have laughed, but here we are,” Ferguson said.

And somehow they managed to keep one French boat behind them, Vers un monde sans SIDA, although they were almost caught as the wind dropped almost entirely for their finish. They crept past the black and white Barra lighthouse into the turquoise waters of Bay of All Saints, which were as smooth as a lake.

“The hardest thing has been dealing with the light winds,” Ferguson said. The windy stuff has been fine, but as soon as it went light the wind just blows straight through the sails instead of helping.”

29 IMOCA left Le Havre on October 27, and 27 have made it to Salvador (MACSF and Hugo Boss had to abandon), some lost a keel, some a foil and some their way, but few had to deal with the travails of Ariel II.

The unlikely became the incredible. “It was weird looking at the stars last night through the missing mainsail panels,” Ferguson wrote on November 2. Huusela was increasingly poetic and he waxed lyrical with pictures of the moon blazing directly through their threadbare mainsail.

Read the story of their race here