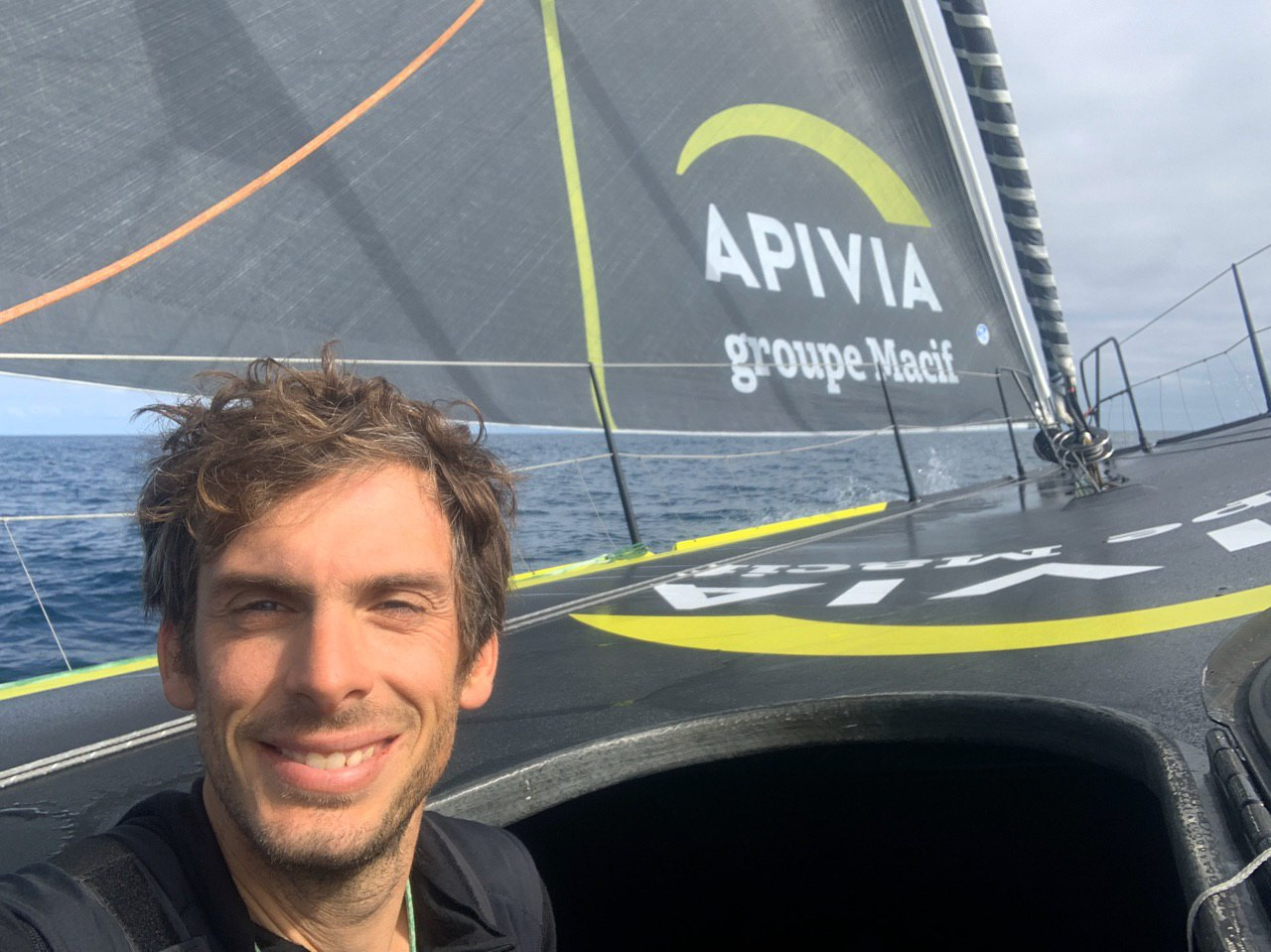 Charlie Dalin at the helm of the white and yellow foiler, Apivia, was the first skipper to reach the Gallimard Waypoint this morning as he turned his bow eastwards for the final stretch of the Vendée-Arctique-Les Sables d’Olonne Race.

The 36-year-old Frenchman based at Port-la-Fôret was making about seven knots of boatspeed in very light airs as the leaders continued to battle their way through the high pressure system centred to the west of them.

Dalin had been fighting hard to keep Jérémie Beyou behind him on Charal and the margin at the mark was less than two miles. Behind Beyou, in turn, came Thomas Ruyant on LinkedOut, about three miles behind Dalin.

The three boats are so close that one mistake from any of the exhausted skippers will be enough to see the lead change hands again as they begin the 540-mile leg to the finish line off Les Sables d’Olonne. The further east they get, the further away from the centre of the high, the more breeze they will have from the north-northwest.

The order at the Gallimard mark – a virtual turning point – reminds us that it has been these three skippers who have dominated the leading positions at key moments in this extraordinary race.

One thousand miles further north at the IOC-UNESCO Waypoint – another imaginary lump of iron in the middle of the ocean – it was Ruyant who sneaked around in front with Dalin in second place and Beyou third, all within three miles.

From now to the finish the cumulative exhaustion that these sailors have experienced could become the key determinant of who takes the honours. As the breeze strengthens, there will be more opportunities for sleep, but as the skippers close the French coast they will also have to deal with more commercial traffic and fishing boats, so it is not going to be easy.

The stats tell an amazing story for a race that initially had looked more like a training run than a full-on battle for glory. The lead has changed hands over the last nearly nine days no less than 33 times as the  fleet has crossed various weather systems heading north and then south.

Since the start, meanwhile, Dalin had covered 2,707.5 miles by the Gallimard Waypoint, in eight days, 18 hours and four minutes at an average speed of 12.90 knots, just 0.10 knots faster than Beyou. It’s been that tight…

Behind the leading trio the next couple of skippers are not completely out of this yet. Kévin Escoffier is fourth in PRB (+9.3) with Samantha Davies on Initiatives-Coeur fifth, another five miles back. Then there is a big gap to Yannick Bestaven on Maître CoQ IV in sixth place (+32.3) who is eleven miles ahead of Fabrice Amadeo on Newrest-Art et Fenêtres.

Boris Herrmann, who had been leading the fleet in the earlier light wind phases, is now in eighth position on Seaexplorer-YC de Monaco, having slipped back after damaging the headboard car on his mainsail. Isabelle Joschke on MACSF who broke her boom, is now 115 miles off the leading pace in 13th position.

Remarkably, the top-12 boats are spread out this morning over only 75 miles of ocean on a north-south axis. After Joschke, who is sailing with no one else around her, the final four boats are continuing south in a loose group with about 90 miles of lateral separation.

The estimated finish time for the first boat off Les Sables d’Olonne is around midnight on Tuesday.