Manuel Cousin : "You have to live your dreams not dream your life away" 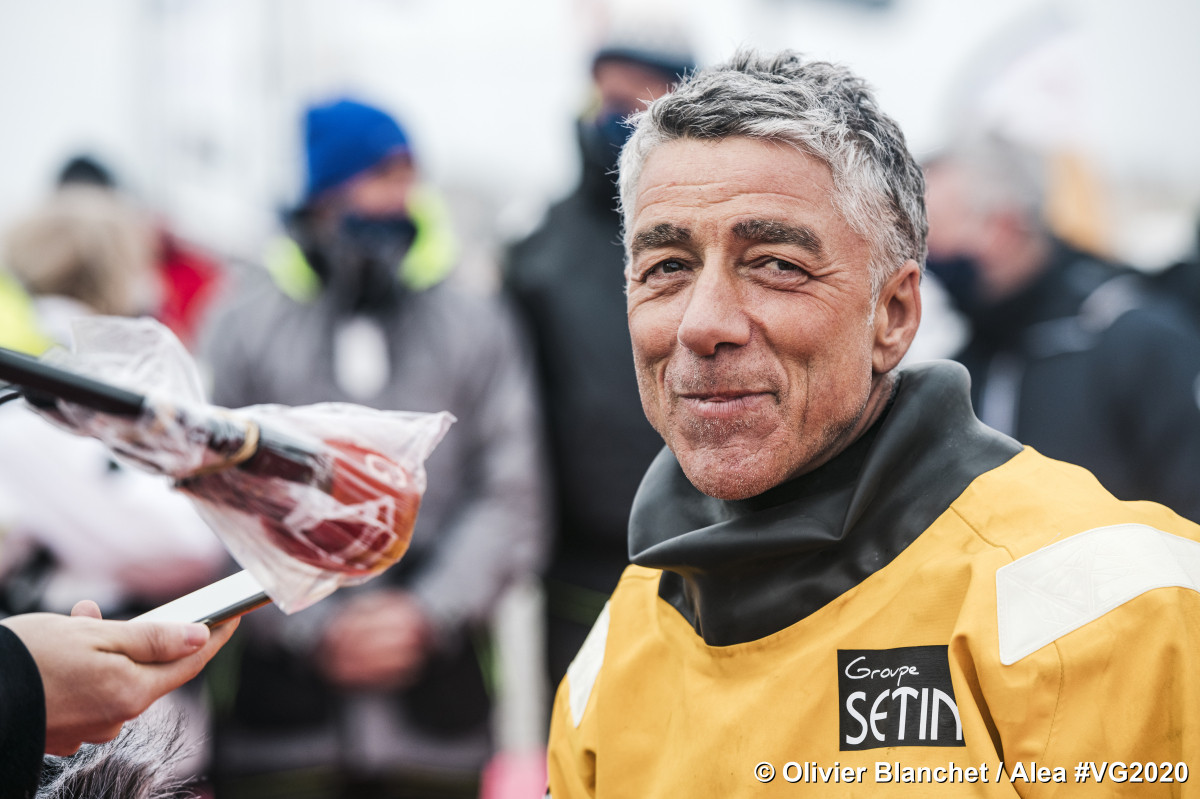 That was the maxim that drove Manuel Cousin to leave his life as an executive selling forklift trucks to major accounts with Toyota, to move from his native Normandy to Les Sables d’Olonne and pursue new goals ocean racing.

Cousin, 53, reached the pinnacle of that new life today when he completed the 24,365 nautical miles Vendée Globe, crossing the finish line off Les Sables d’Olonne at 07:35:40 hrs UTC this morning in 23rd position. After struggling at times with a cracked rudder and more recently keel ram damage, Cousin’s elapsed time on Groupe SETIN is 103d 18hrs 15m. He sailed an actual course of 29,116 nautical miles at an average of 11.69kts.

Having acquired a lot of technical knowledge after working in the automobile sector for twenty years, Manuel Cousin, a keen sailor since he was young, decided to fulfil his dream of becoming a professional sailor at a late age. Since the start of the race, his aim has been to complete the round the world voyage and throughout the adventure, the skipper of Groupe SÉTIN has shown determination, dealing with each difficulty he encountered.

He set off on 8th November at a fairly fast pace, as if he was about to sail across the Atlantic, but with the aim of sharing his experience with the public. The Doldrums were not kind to him, but Manu always had a smile on his face. “Before the start, I was worried about time dragging, but in fact, everything happens quickly,”he declared on his way down the Atlantic. He looked forward to dealing with the low-pressure systems in the South Atlantic and showed almost child-like amazement when he saw his first albatross. He kept pushing hard during the first few weeks, but was forced to slow down when faced with a series of problems.

“We quickly go from a feeling of total satisfaction to the impression that the world is about to fall in.”Incidents would in fact mar his performance in the race. On 11th December after passing the Cape of Good Hope, Manuel Cousin noticed a huge crack on the top of his port rudder, which forced him to carry out repairs during the night. He would not give up and attempted to set off again as quickly as possible, although at reduced speed.

In early January, his autopilot failed, causing the boat to broach and leading to a lot of damage, in particular to his mainsail. On 8th February, his keel ram rod gave up the ghost. He spent 48 hours carrying out repairs day and night, always with the lure of the harbour in Les Sables to motivate him. His race has been characterised by his tenacity in the face of such adversity. His goal has been to complete the voyage, and he has regularly expressed his satisfaction at what he has achieved. The Vendée Globe may not have been everything he imagined or dreamt of, but the memories of an extraordinary adventure will surely remain with him. “When times get tough, you wonder what you are doing here, but once you get back, you want to do it all over again. I have enjoyed myself so much. I never thought about giving up and always tried to find solutions to ensure I could sail all the way.”
It was an overjoyed, expansive Manuel Cousin who crossed the finish line today in 23rd place before enjoying a rousing welcome back to his adopted home town of Les Sables d'Olonne. This is the best of of Manu at his press conference...

How do you feel Manu?
"I feel so happy to have crossed that finish line, to have come up this famous channel. Honestly, I hardly dared think about it before now because there were times I was good and then hard times would come and I wondered if I would make it.

I was in the place where I could only focus on my boat for 24 hours. I started again at that point but from there the race took on a different pace as I could no longer push the boat so hard. And other things happen. It’s not a simple race, you know that all the time. And then two weeks ago it was hard I was still fighting with Miranda and Clément when the keel cylinder rod broke. At that point I really told myself that it was not done. I am so happy to be here."
How would you describe the Southern Ocean?
"It's so many things. It’s a very unique atmosphere. There are big swells, the sky hangs low above you and there are successive depressions, full of birds, especially albatrosses. On the way down, I couldn't wait to see them and when one morning one appeared behind the boat, it was just magical. It’s so majestic. At the beginning I was just super happy because you go there for that experience and after a month you are happy to be getting out of it. But the mad thing is that when you get back here you are already wanting to go back."

Can you talk about the importance of your team in this race?
"Whatever you do in life it's always better to be surrounded by good people, but in an extreme sport like this it's even more important. First, there is my wife, Sandrine who is my partner whom I have been with for a few years, and then the whole technical team. So many people who work together we form a small family. We try to do things well. We entered the IMOCA Class a bit through the back door but we always tried to show that we could do things well. I hope I can say that is recognized by the people who made me dream of this a few years ago. I had a lot of interaction with many of these skippers before starting, but today we are all friends, colleagues, competitors. What is important in our sport is this solidarity which is incredible. Never have I received so many messages of support. It is a solidarity that is unsurpassed. I am super proud to be part of this family."

What were the highlights?
"For sure the one I just experienced two hours ago is always going to be one of them. The finish is one of the strongest moments, but there are so many.  The start is also a big moment, it is also maybe because I had another professional life before this and so maybe I realize more than others what it is to have arrived here now There is also the passage of Cape Horn, or when you pass the longitute and you realize that you are Cape Hornier that is a bit crazy.. And then there are plenty of moments when you are racing, when you see the first albatrosses, when the boat is running fast, when you go fast and you are having fun. When you leave for a Vendée Globe you also leave thinking about what can happen. But I was so determined I really would have had to have a big problem, big damage not to have made it here to the finish  here today."

What was on your mind last night?
"Last night about 0200hrs was really the first time I released the pressure. Until last night it was complicated with the injured boat and I knew I had to avoid getting into too big lows. It was downwind then so I figured even if the keel fell, I could still make the line. For three hours I was playing loud music in the cockpit. My eyes were tearful as I thought I had already done it. Once I was past the Rochebonne plateau where there are a lot of fishermen where you have to be really careful, after that point I relaxed and had fun in my head."

Were you sufficiently prepared?
"I prepared as best I could. Physically I was really ready. For the boat, I didn't have any problems at the start so I think it was ready too. It is clear that for the next one, if there is one, I will know more and there will be less surprises. Nothing can take the place of experience. So there will probably be things that I do better or differently. I got here so I think I was ready for what happened and what I had to do."

Did you imagine this race would be so difficult?
"I have been passionate about this race since I was very young and it is the difficulty that attracts us. We know it's an extreme race. I wasn't surprised because I knew it would be hard. That’s what makes this race so beautiful. You have to be very well prepared, you don't just set off for a Vendée Globe like it is no big deal."

Have you witnessed the pollution of the oceans?
"Yes, of course. But you don't see garbage bags every 3 meters. We are witnesses to pollution and even in southern ocean where there is no human life really. There are also evolving phenomena that seem bizarre. We had a lot of weed from northern Brazil to the Azores. I had never had this for such a long time. We wonder if this is global warming. Then, in the middle of the Atlantic, in the northeast trade winds, I saw Chinese fishermen on AIS and with multitude of points separated by only 2-3 miles. It was driftnets set by a few boats. I didn't see the full length of the nets but it was dozens and tens of kilometers long. It’s sad to see Chinese fishing boats ravaging the ocean like this."

Would you like to go back? If so, under what conditions ?
"Obviously I want to go back. With more idea and a more competitive boat. I just got back to land and so we have to talk about it because a lot has happened in this Vendée Globe."