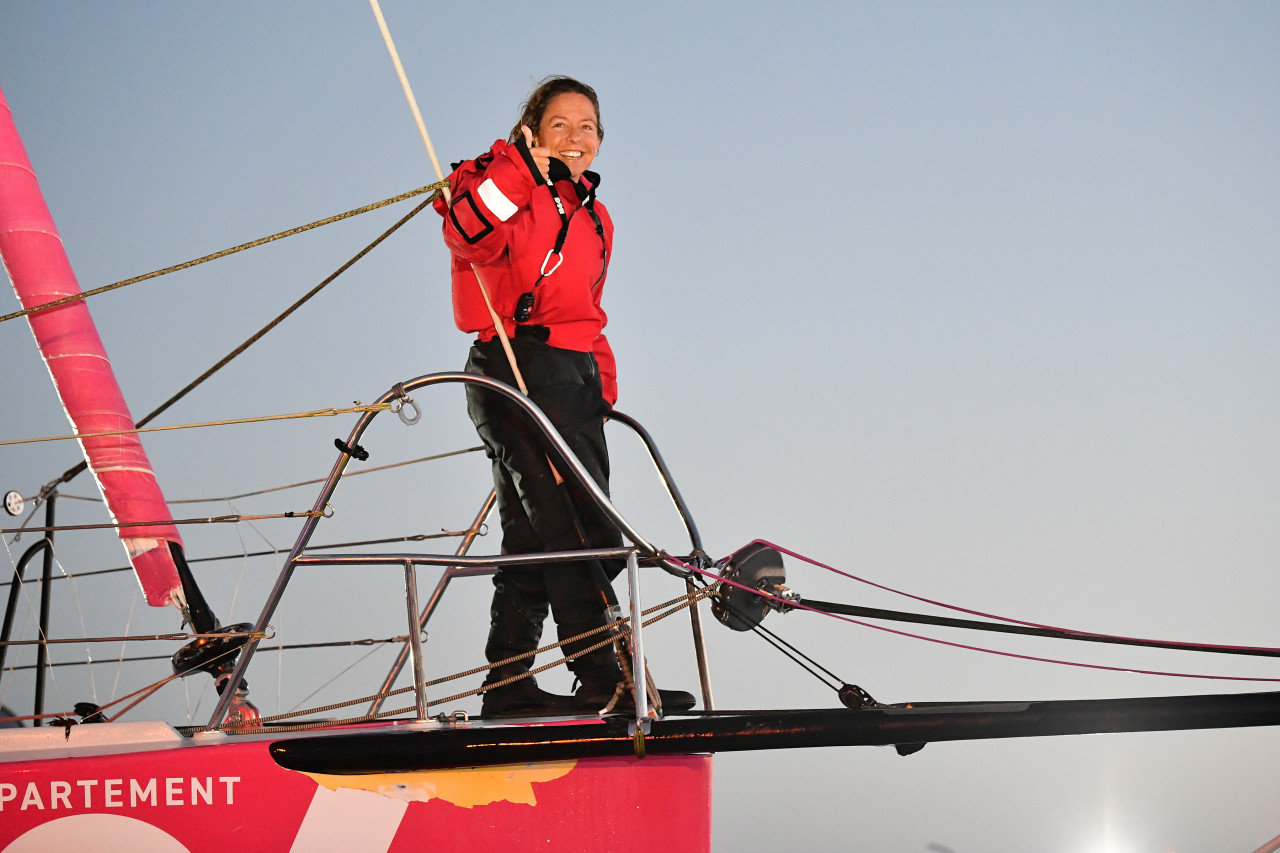 On a perfect Sunday morning, 28th February, at  06 23 44 hrs UTC  French skipper Alexia Barrier crossed the finish line of the ninth Vendée Globe off Les Sables d'Olonne to finish her race in 24th position of the 33 skippers who started the race on Sunday 8th November.

Racing the oldest boat in the fleet, the 41 year old Mediterranean skipper showed great stamina and tenacity for a passage time of 111 days, 17 hours, 03 minutes, her race always reflecting her great enthusiasm and her huge appetite for life.

Her race achieves her ongoing objective of publicising her wider concern for the environment, promoting better, sustainable practices, backed up by an extensive education programme for young people. Racing a boat launched in 1998 she extends the long round the world racing history with  completes the sixth lap of the planet for ‘the Penguin’ an IMOCA which was designed by Marc Lombard for Catherine Chabaud's Vendée Globe 2000.

Her ability to take on the Vendée Globe was only really cemented in September last year, two months before the start when TSE, a French solar energy company sign up at the last minute as her major sponsor. And so beyond the challenge of the race itself Barrier is committed to supporting scientific research and raising public awareness of the importance of ocean science in the protection of the seas and the sustainable use of marine resources.

As part of a partnership signed between the IMOCA Class and the Intergovernmental Oceanographic Commission (IOC) of UNESCO, Barrier sailed with a thermosalinograph, a mini laboratory that allows her to collect water samples taking temperatures, salinity and CO2 from all along the course. She also deploys a Météo France buoy and an ARGO float.

After the start she is quickly into her rhythm. Regardless of the tough conditions of the first few days Barrier is always pushing hard and usually smiling and in harmony with her older boat. “It requires a lot of attention, trimming and adjustments and is very physical but dependable but I love my Penguin!”she said.

One day after her passage of the Equator, on November 26, Alexia turns 41 "There is no better way to spend a birthday than at sea." She says.

Her first time in the big south

Before the start Barrier spoke about the deep south, saying, "I'm really not making a big deal out of it, I'm just waiting to be there to experience it when I am there and take it all as it comes. We can’t worry and predict about what lies ahead.”

Even so as she approaches the Roaring 40s there she has an air of slight trepidation,
"I'm glad there are people around, that comforts me. We are competitors but we take care of each other. I hope we will stay together."

Such is the sunny outlook and positive mindset which always underpins her race, always happy to communicate and share her feelings, more than once entertaining with her singing and dancing with a sheer joie de vie.

In mid-December as she passes South Australia, she said "I'm smiling, I'm starting to get used to the conditions."

At Christmas Barrier is tested with a very unwelcome gift, her starboard runner block explodes:
"The mast went forward and I thought in an instant it was all over. I immediately rolled my J2 and gybed I was terrified!"

She employed an ingenious way to check for any damage hoisting her Go Pro up the mast A few days later she reflects:

"I'm happy to be here, everything is going pretty well. There are much more serious things in life than breaking a block."

The skipper of TSE-4myplanet is not spared further challenges. The ten days approaching Cape Hor are particularly complicated with big winds and seas, an unrelenting challenge describes as "intense and violent."

But in spite of everything, she continues to rave about the adventure she is enjoying.

"Cape Horn, you finally deserve it when you are there. And the South is a great experience: there are lights, clouds, absolutely fantastic sunrises and sunsets! "

Even under the worst conditions she shows typical perseverance and good humour.
"I try to take on problems with a smile. You don't have to live them under a black cloud, you have to solve it and enjoy having solved it until the next one."

She counts on on the little notes and photos she finds in her food bags throughout this period. "I have lots of blue post-it notes and a bit of encouragement. I had prepared 50 photos, I draw one out at random every day, it makes me smile. These are photos of my friends and relatives, photos of boats, of my Mini, more artistic photos, a photo of SOS Mediterranean."

Throughout her race, Alexia always repeats. "Competing in the Vendée Globe is such a privilege."

After Cape Horn and her deliverance from the south, the ascent of the Atlantic promises to be more serene, with a relatively benign doldrums "I had 36 hours with squalls that made my life difficult but not for long."

But on February 15, a little over a week before the arrival at Les Sables d'Olonne, the sailor had a bad fall while dressing and hurt her back.

She is quite immobilised by the intense pain to the end, but true to herself she pushes her injured body until she achieves her goal competing the race wearing her big smile and her head held high "I am not fed up about my back I will soon have completed my Vendée Globe and that's all that matters." She said a few days before her finish.

Asked before the start "What is your main quality?"  she replied instantly "My fighting spirit".

Completing her Vendée Globe today proves that is only but one of her many qualities but probably the one which got her to the finish line.