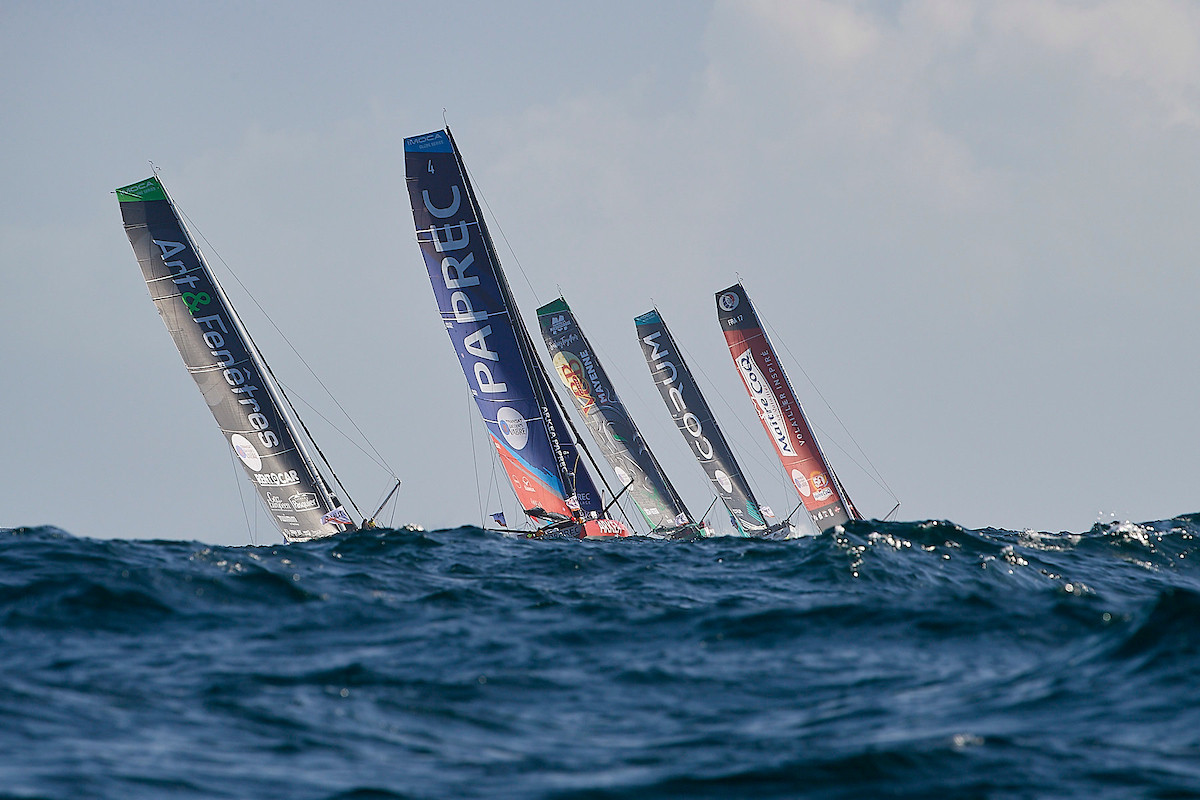 On Sunday 27th October, 30 IMOCAs will line up for the start of the Transat Jacques Vabre – a record. That means 60 sailors (including 7 women and 16 non-French sailors) will be doing battle over the 4350 miles separating Le Havre from Salvador da Bahia. The line-up brings together people from various backgrounds and with various ambitions.

There were thirteen in 2017 and this year, there will be thirty boats. From one edition to another, the number of double-handed crews competing in the Transat Jacques Vabre has more than doubled. There has never been such an impressive line-up both in terms of the quantity and the quality.

The big names from the class

Among the sixty sailors competing, 15 took part in the 2016-2016 Vendée Globe, including the three who made it to the podium: Armel Le Cléac’h, Alex Thomson and Jérémie Beyou. We will also be seeing the legendary Jean Le Cam and Vincent Riou, along with Yann Eliès, Louis Burton, Alan Roura, Romain Attanasio, Paul Meilhat (winner of the 2018 Route du Rhum), Thomas Ruyant, Arnaud Boissières, Morgan Lagravière, Fabrice Amedeo and Stéphane Le Diraison.

Then, there are the sailors who did not take part in the 2016-2017 Vendée Globe, but who have already taken part in most of the races in the IMOCA Globe Series, including the 2018 Route du Rhum. That is the case concerning Boris Herrmann, Damien Seguin, Yannick Bestaven, Sam Davies, Isabelle Joschke, Ari Huusela, Manuel Cousin, Erik Nigon and Alexia Barrier.

Among the sailors who will be taking part in their first IMOCA transatlantic race on an IMOCA, a few names stand out. There is for example the highly experienced sailor, Kevin Escoffier, who won the Jules Verne Trophy (in 2012) and the 2017-2018 Volvo Ocean Race. Kevin has paired up with Nicolas Lunven, who has already taken part in the Transat Jacques Vabre on an IMOCA (on Safran in 2015) but has never completed the race. The holder of the Transat Jacques Vabre title in Class40, Maxime Sorel is back this time on an IMOCA with Guillaume Le Brec. This race will also be the first big event for the Figaro racers, Anthony Marchand and Benjamin Dutreux. As for Miranda Merron and Halvard Mabire, it is a case of rediscovering the race. The most experienced ocean racing couple will be making their come-back here aboard an IMOCA.

In addition toMiranda Merron, seven other women have registered, including two who will be sailing on IMOCAs that have become fast and impressive foilers, Sam Davies and Isabelle Joschke. As for Clarisse Crémer, she is continuing her fast track learning programme with Armel Le Cléac’h. Alexia Barrier and Joan Mulloy make up the only all women crew, while British sailor, Pip Hare will be joined by her compatriot Andrew Baker.

Winners of the Rolex Fastnet and the Azimut 48-Hour Race, Jérémie Beyou and Christopher Pratt will be the favourites aboard Charal, launched over a year ago and fine tuned since then. The first major battle between the four new generation IMOCAs launched this summer is one we have been looking forward to. Hugo Boss (Alex Thomson/Neal McDonald), Arkea Paprec (Sébastien Simon/Vincent Riou), Apivia (Charlie Dalin/Yann Eliès) and Advens for Cybersecurity (Thomas Ruyant/Antoine Koch) should be strong contenders.

We will also be keeping an eye on the former Hugo Boss aboard which Alex Thomson finished in second place in the 2016-2017 Vendée Globe. The boat is now in the colours of 11th Hour Racing and will be skippered by Charlie Enright and Pascal Bidégorry. Among the other competitors who will be closely watched, there are the three duos on boats, which were not initially designed as foilers, but have been equipped since: PRB (Kevin Escoffier/Nicolas Lunven), Initiatives-Cœur (Sam Davies/Paul Meilhat) and MACSF (Isabelle Joschke/Morgan Lagravière).

As is customary in IMOCA races, there will be races within the race in this fleet of 16 foilers and 14 IMOCAs with straight daggerboards (including one launched more than twenty years ago, 4myplanet). With less than a month to go to the start, each pair will be determining their own goals and identifying which of their rivals they would like to see behind them…