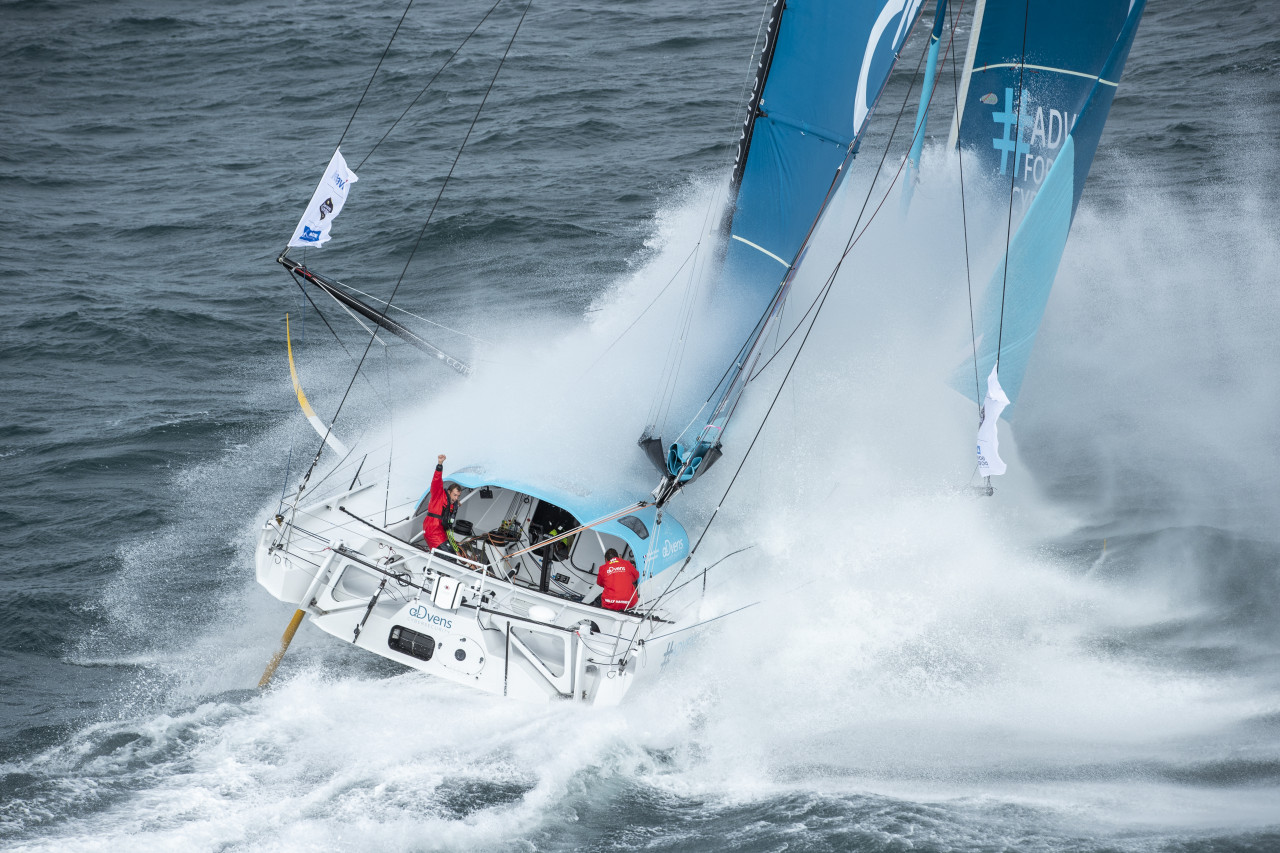 Since the start at 1215hrs UTC yesterday from Le Havre, the 29 IMOCAs have been sailing at high speed and quickly made their way out of the English Channel, even if three double-handed crews (Ruyant/Koch, Sorel/Le Brec and Joschke/Lagravière) suffered technical problems forcing them to carry out a pit stop.

Already well across the Bay of Biscay, the leaders, led by Jérémie Beyou and Christopher Pratt on Charal, are keeping up a fast pace. At 1600hrs UTC this afternoon, the fleet at sea was already spread out over a distance of more than 140 miles.

Three duos have been forced to carry out pit stops. Thomas Ruyant and Antoine Koch stopped in Cherbourg to do some work on the autopilot rams on their IMOCA Advens for Cybersecurity. As laid down in the Notice of Race for the Transat Jacques Vabre, they had to remain there for four hours before getting back in the race. “We didn’t have any choice but to stop,” commented Thomas Ruyant. “Now, we’re going to have to find our own way through to try to catch up the others. We’ll have to do it on sheer speed, but we’re also looking at the weather and trying to find the fastest route. We want to find the right trajectory in this transatlantic race and there’s still a long way to go. We have the bit between our teeth and will give it our all.”

Maxime Sorel and Guillaume Le Brec discovered a technical problem last night with the port outrigger cable. “We have no choice other than to stop to carry out repairs. According to the manufacturers, there is too big a risk of dismasting. The whole team is working hard to try to come up with a solution to replace this cable,” explained Maxime Sorel. V and B-Mayenne arrived in Brest early this afternoon.

As for Isabelle Joschke and Morgan Lagravière (MACSF), they too will be putting into Brest to repair the keel on their IMOCA, which was damaged when they ran aground off the cliffs of Etretat. Isabelle and Morgan hope to get back in the race as soon as possible.

The foilers leading the way

Aboard Charal, Jérémie Beyou and Christopher Pratt have already confirmed that they are well prepared. In the 1600hrs rankings, they were leading the fleet ahead of Initiatives-Cœur (Sam Davies/Paul Meilhat), Apivia (Charlie Dalin/Yann Eliès) and 11th Hour Racing (Charlie Enright/Pascal Bidégorry). “We are in the Bay of Biscay in very strong conditions with fairly heavy seas and 20-25 knots of wind and we’re speeding along,” said Christopher Pratt. “Last night, we had to carry out quite a few manoeuvres and we both spent a lot of time out on deck. We should be getting away from the influence of the front with an area of lighter winds. It all requires a lot of work and we’re going to have to learn to keep hard at it, as it is going to be like this all the way to Bahia.”

We can see that three pairs of sailors on IMOCAs with straight daggerboards are doing particularly well, in spite of the fast start to this race, which tends to favour the foilers. Groupe Apicil (Damien Seguin/Yoann Richomme) is this evening in fifth place, Banque Populaire X (Clarisse Crémer/Armel Le Cléac’h) 7th and CORUM L’Epargne (Nicolas Troussel/Jean Le Cam) 9th.

Understanding the strategy adopted by the IMOCAs

From tomorrow, Tuesday 29th October, the IMOCA class will offer you the analysis of a weather expert every other day. They will explain the options taken by the double-handed crews and examine the strategic choices that lie ahead.