After the baptism of fire for the IMOCA crews on Leg 1, it’s going to be light and hot on the long road to Cape Town 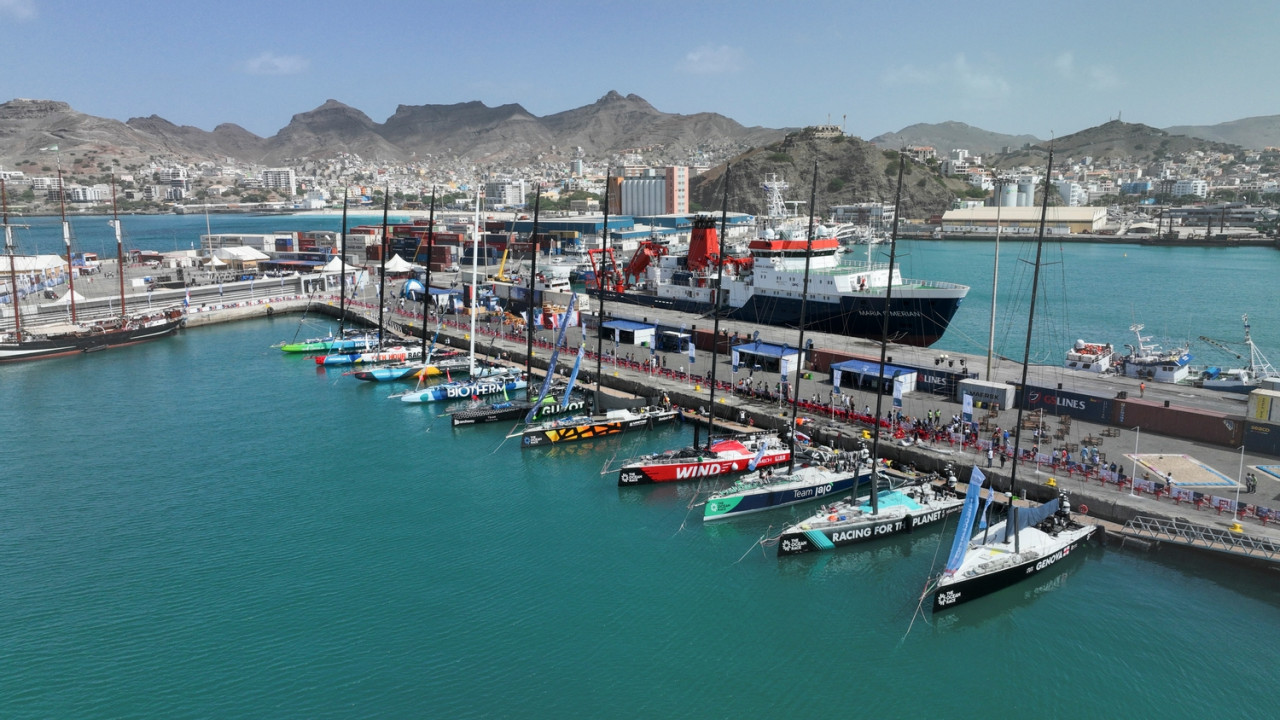 This time patience and taking opportunities when they arise – but also not losing the plot when things go against them – is going to be the name of the game as they take on a hot, lightwind passage from Cape Verde to Cape Town.

The race literature lists this stage as 4,600 nautical miles, but it could be longer than that if the weather proves tricky on a voyage that starts in the northeast trade winds, then features a crossing of the Doldrums and then a long stint tackling the St Helena high.

Christian Dumard, the weather consultant to the race, says that after a light wind start on Wednesday, the first decision for navigators and skippers will be whether to sail south through the Cape Verde archipelago or head west – and quite far west – to get out of the wind shadow of the islands.

The way the crews approach that first decision will affect where they cross the Doldrums. “If they want to cross them in the west, then they have to go west as soon as they start,”said Dumard. He reckons there will be no need for them to head right over to the Brazilian coast at Recife and will probably cross the Pot au Noir at about 28 West, where he predicts they should make a relatively quick passage through to the southeast trade winds.

“They might get stuck for a few hours, but probably not for a long time – not for two or three days – and then, after that, they will be heading mainly south. They have to get south of the St Helena high pressure system and hopefully that will move east, so they could have – perhaps not the shortest route we have seen in the south Atlantic – but not the longest one either.”

However, Dumard warns that if the centre of St Helena high moves south as the leg progresses, it will be difficult for the IMOCA teams not to end up stuck in light airs trying to get to Cape Town. “It’s complex and this race will not be over until the finish, if the high goes a little further south – we saw this in the Ultime race in 2019 – they all got stuck in the high pressure before getting to Cape Town,” he said.

So this leg is going to be hard work for the trimmers and light-airs boatspeed specialists, but also for the navigators – men like Simon Fisher on 11th Hour Racing Team, Nico Lunven on Team Malizia and Kevin Escoffier on race leader, Holcim-PRB – who will have to plot their way through large areas of light and shifty winds.

In Cape Verde, the boats have been repaired, after the stresses and strains of the first leg, and we are also seeing the first evidence of the squad system the teams are using to pace themselves through this seven-stage race that does not finish until early July.

Two skippers are taking a rest. Benjamin Dutreux will hand over leadership duties to Robert Stanjeck on Guyot environnement-Team Europe and is being replaced by Sébastien Simon while, on Team Malizia, Boris Herrmann is being replaced by Yann Eliès with Will Harris taking over the skipper role.

The German team revealed today that Herrmann suffered a serious burn injury to his foot during the final stages of Leg 1, when he was making either a hot drink or some food. Herrmann initially hoped he would be able to continue on Leg 2, but after a visit to hospital in Mindelo it became clear that he would have to sit out the second leg to ensure the wound healed properly in time for the Southern Ocean.

It was an unfortunate incident that underlines the dangers crews face cooking on a platform that is being thrown around violently in a seaway. Team Malizia has been in discussion with 11th Hour Racing Team, who have shown them the tap they have added to their kettle to try to reduce the risk of injury when pouring hot water on board.

For the Swiss yachtswoman Mettraux, this will be her third appearance in the Ocean Race after being part of Team SCA in the 2014-15 Volvo Ocean Race and then part of the Dongfeng Race Team that won the last race in 2017-’18. “It’s nice to be back in The Ocean Race,” she said in Mindelo today. “It is my first time now in this edition of the race, so it is part of my career and history, and I am really happy to be back here, feeling really lucky to be part of this amazing race again.”

The Teamwork skipper who finished seventh in the 2022 Route du Rhum-Destination Guadeloupe, says crewing on 11th Hour Racing Team Mãlama will be useful for her, and for them. “For sure I am learning things with 11th Hour that will help me with my Teamwork project and the other way around too. It is just more time on the water in IMOCAs, so it is really good to sail on both campaigns,”she said.

The Swiss sailor echoed Dumard’s prediction about a testing and potentially long leg ahead. “It’s not going to be easy on the navigation side, so we will be trying to avoid big mistakes in that area,”she said. “We are going to have to be good at estimating the risks that are worth taking or not, while trying to go fast all the time. There will probably be a lot of opportunities and key moments, so it will be important to try to stay focused the whole leg.”

The word from the race organisation is that they are very happy with the way the IMOCA Class has tackled the challenge of its first The Ocean Race so far. Phil Lawrence , the race director, said it was great see what he called the “super-competitive” spirit between the IMOCA crews. “They are in it to win it, and working well with the organisation (of the race) as well, which is great,”he said.

“I am very happy with the way it is going,” he continued. “The IMOCAs had an absolutely brutal exit of the Med, with winds of over 50 knots on the nose, which are not the optimum conditions for these boats, and they’ve handled it pretty well. They’ve got some sail damage and bits and pieces, but they are dealing with all of that here. There’s no major structural damage that I’m aware of, so it’s all pretty good. And they were very, very fast once they got out of the Med and into favourable conditions – piling on the 500-mile days which was impressive.”

Lawrence added that he was not surprised that the crews were erring on the side of caution out on the racecourse. “They have got to get these boats around the world and when they let them off the leash, they really are beasts. Some of the peak speeds we’ve seen on our live tracker are in the high 30s – that’s right up there! Obviously they have got load alarms on the boats, so they are managing their boats, which is great,” he said.

While Escoffier and his team on Holcim-PRB will be looking to follow up a strong performance in Leg 1, there can be little doubt that Charlie Enright and his well-drilled crew on Mãlama will be looking to get one back on them on the way to Cape Town. At the back of the fleet, Paul Meilhat on Biotherm (fourth in Leg 1), and the crew on Guyot will be hoping for improved performances on the stage before the Everest peak of Leg 3 through the Southern Ocean to Brazil.

One element that has been striking at this first stopover is the confidence boost Herrmann and his crew on Team Malizia have taken from their competitive third place in Leg 1. No one in that team was hiding their nerves about boatspeed before they left Alicante, but the mood is definitely more upbeat now.

“Boris is the happiest he has been in so long because the boat is going so well and the team is working so well,”said team director Holly Cova. “He came back from Leg 1 honestly so happy, even with his injury. He was like ‘this couldn’t be better.’ It is the most confident he has ever been in the boat and team,”she added.